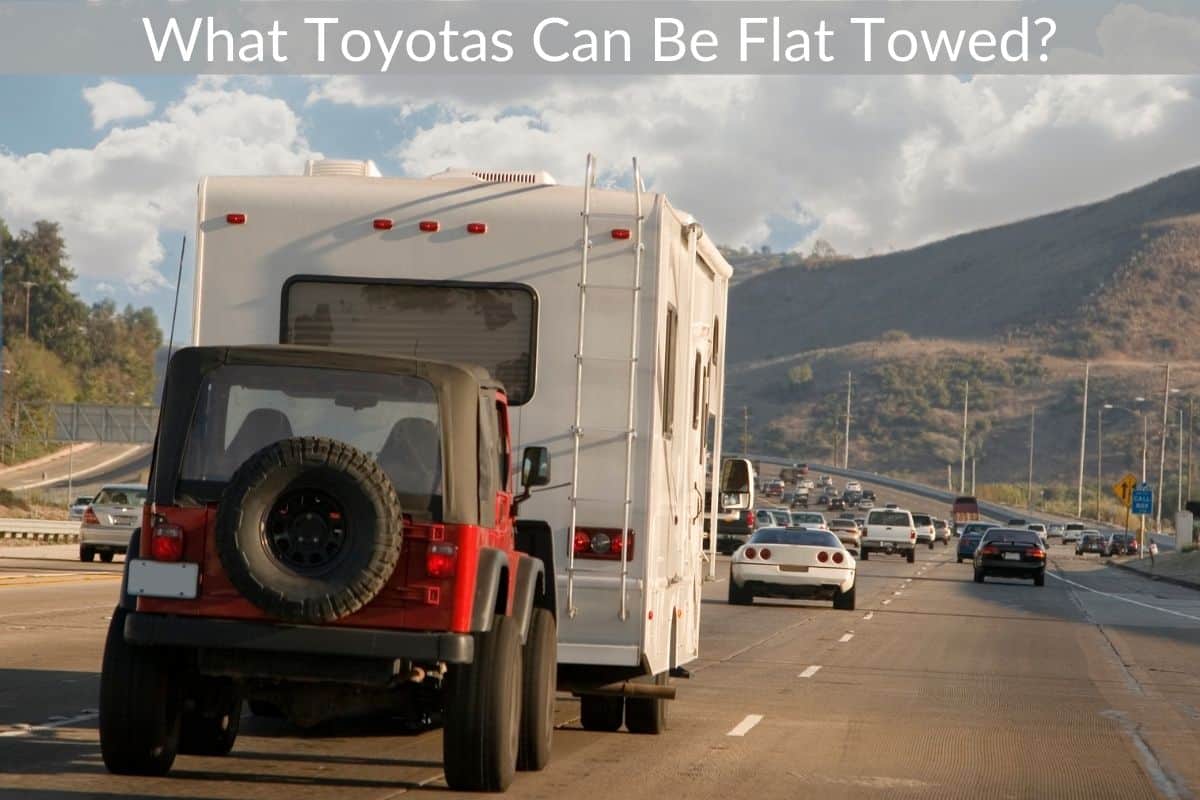 Unfortunately there is no standard for which Toyota models can be flat towed as it varies based on the transmission as well as the year.

According to Toyota the following models (and years) are the only ones that can be flat towed.

What Is Flat Towing?

Flat towing is also called the “four-down towing” or “dinghy towing.” It involves the process of attaching a tow bar to a suitable car, SUV, or pickup and letting an RV pull it along and provide power for it to move.

It’s also often called dinghy towing because the towed vehicle looks like a small dinghy being pulled behind a large yacht.

Flat towing was fairly common a decade or two ago as it wasn’t difficult to find cars with a manual transmission or four-wheel drive SUVs that could be pulled four-down.

Over the past few years, however, the number of cars which can be flat towed have reduced. The following are cars which can normally  be flat-towed easily:

Thus, a decrease in the production of the car categories listed above means fewer cars that can be flat towed. Also just because a car, truck or SUV meets one of the these qualifications doesn’t mean you can flat tow it.

Always be sure to check with the car’s manufacturer to make sure whether your model can or can’t be flat towed.

Why Can’t Toyotas Be Flat Towed?

If you still attempt to do this, chances are, you’ll mess up your car’s transmission.

Vehicles with a CVT also can’t be flat towed. Nowadays, most of the Toyotas released have CVTs. Toyota Corolla, Camry, Prius, and Rav4 are some of the models with CVTs, which means that none of these can be flat-towed.

These models are also some of the most popular selling models amongst customers, which means that not many Toyotas can be flat towed.

Similar to an automatic transmission, if you try to flat-tow a CVT car, you’ll find that you’re going to destroy the transmission.

According to Toyota, it has to do something with lubrication. Some Toyota vehicles require a pump to operate inside the car continuously so that the moving parts are lubricated. Therefore, such cars can’t be towed four-down.

The shaft is not lubricated in automatic transmission and pump-dependent manuals unless the car’s engine is running. The cars can also be severely damaged if they are towed with the driven wheels along the highway, and thus, it’s better not even to risk it.

What Can You Flat Tow?

If your car is not new and you’re not sure about whether or not it can be towed, you should look at the following features:

If your car has a four-wheel drive and a manual transfer that the driver can place in neutral, you can flat-tow the car with relative ease.

You don’t even need to have a physical copy of the owner’s manual. You can search for a computer copy on the internet and read it, so you’re sure about the method you’re going to follow.

If you still want to flat tow your Toyota, there are also other products you can buy, so it’s easier for your car to get towed. You can add devices like driveshaft decouplers and transmission lubrication pumps to your automatic transmission vehicle to make it suitable for a flat tow.

If you have a vehicle that’s not suitable for a flat-tow, there are towing companies that can carefully install such devices in your car to make it possible. However, there are no guarantees with these devices, and you may end up harming your car in a way that’s not covered by insurance.

Thus, you should do so only in cases of emergencies, where you have no other options.

If you’re looking for a towing vehicle, it’s best to ensure that its factory settings are perfect for towing.

Most new Toyotas can’t be flat towed. Toyota mostly manufactures cars with an automatic transmission or a CVT, which makes flat-towing them difficult.

Most models of Toyota require a degree of lubrication within the moving parts which can only occur if the engine is running. Thus, the chances of you finding a new Toyota which you can flat tow are slim.

Furthermore, if a car has rear-wheel drive, you can flat tow it too. Rear-wheel drive means only the rear-wheels of the car are driving the car forward, and thus, they can remain on the ground to have a “two-down” tow. If your Toyota has these two features, it can be flat-towed.

Since Toyota has stopped introducing new cars with a manual transmission and the number of Toyotas with a front-wheel-drive is increasing, many Toyotas can’t be flat towed.

In emergencies, you can introduce devices that will allow for a flat-tow, but you should do this if it’s extremely necessary as a major fallout can occur.