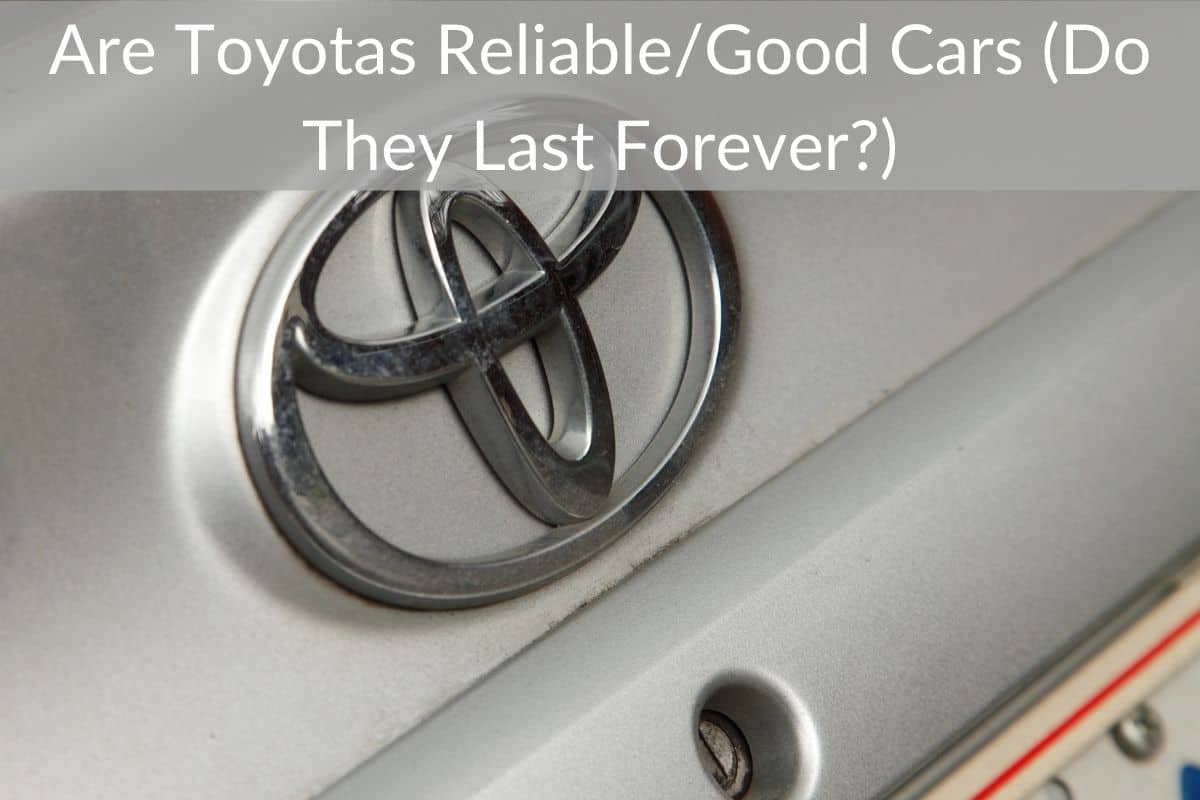 Many people love Toyotas but with good reason. They are not only a decent looking car/van/truck but they also have low ownership costs.

But are Toyotas really as reliable as everyone says?

Toyotas are one of the most reliable brands, and customers benefit from Toyota’s reliability by having a low overall ownership cost. Toyota is known for producing vehicles that are exceptionally dependable and long-lasting.

Although Toyotas won’t last forever, they are known to last 300,000+ miles a lot of the time. How long a vehicle will last really does depend on how well you take care of it, but when comparing a Toyota to many other brands the Toyota simply lasts longer.

Toyotas also frequently rank towards the top of consumer surveys for reliability. Ultimately there are a few reasons why Toyotas are so reliable and such a good car.

I will go over a few of them below.

Why Are Toyotas Reliable?

As I mentioned earlier Toyotas are extremely reliable and can last for many hundreds of thousands of miles, but why is that? Why do Toyotas vehicles last so much longer than their counterparts?

Manufacturing at Toyota is centered on the philosophy of Kaizen, a Japanese approach that means to improve for the better steadily yet continuously.

A loosely defined version of the idea has been in use at Toyota since 1960, and its principles were institutionalized in 1992 as the Toyota Production System (TPS).

To many people, this is seen as the root of Toyota’s competitive advantage because it is the cornerstone of its production system.

Many automakers, especially American ones, lack Toyota’s flexibility in embracing new technologies and methods of doing things. Every time they release a new car, some automakers try to impress the consumer by making extensive design modifications.

This might be exhilarating, but it can also lead to reliability issues.

Toyota instead focuses on quality and durability rather than innovation. It is believed that Toyota’s ideology is so thoroughly established in its corporate culture that numerous automakers have tried to use it, but none have proven successful.

Toyota has always been famous for making reliable cars that last a long time, and they continue to do so today. A big reason for this consistent popularity and reliability is the simplicity of the manufacturing process and the models.

As a result, these cars are more inexpensive. Due to parts being more common and cheaper to replace or repair, this affordability is mirrored in the repairs’ cost.

This also ensures that there are fewer things that can go wrong with a car.

Additionally, Toyota’s cost of repairing it is lower since their parts are so common and often used.

Kaizen is a philosophy that promotes quality over quantity. Toyota has a laser-like concentration on perfection. As a result, the product’s appeal is maximized.

They do not care about adding gizmos or boosting short-term sales goals; they are more concerned with making great products that last a long time.

This enables senior management to plan farther in advance and build superior strategies that result in significant improvements in the company’s performance.

Do Toyotas Last A Long Time?

It is no wonder why Toyotas are so popular. They are high-quality, long-lasting vehicles that are designed to survive for a long time. If you decide to buy a Toyota of any kind, you can rest easy knowing that you are getting a vehicle that will last for many years to come.

Even though a vehicle’s actual mileage depends on the model and how well you take care of it, Toyotas are known to endure well beyond 200,000 or even 300,000 miles.

The fact that Toyota has such a long lifespan is one of the reasons so many people choose it as their next vehicle.

Toyota produces some of the most durable automobiles on the market. For years, Toyota cars have been known for their durability, earning a reputation as trustworthy vehicles.

Since Toyota cars rarely break down, you will save tons of money by owning one.

How Can You Make A Toyota Last Even Longer?

You can extend the life of your Toyota even after you have driven hundreds of thousands of miles. You will be amazed at how long a Toyota can last if you follow these car maintenance guidelines.

Keep up with oil changes

While most drivers realize how vital it is to keep up with their regular oil changes, some car owners are not as diligent. Make sure you follow the maintenance regimen indicated in your new Toyota’s owner’s manual.

Do not wait for the matter to fix itself

If you see warning lights on your dashboard or notice that something does not seem right when you are behind the wheel. Taking your car to a mechanic allows you to detect and remedy any problems before they become costly.

Make sure you have the basics covered

Performing basic maintenance on your automobile, such as checking your fluids and oil, or having your filters cleaned, can also help reduce wear and tear on your vehicle.

Avoid running out of gas

A car’s fuel tank can be pushed beyond its capacity in some instances; however, it is not the best idea. There is an increased risk of contamination entering your vehicle’s lines, which can lead to premature wear and tear.

It would be best to get your car repaired with premium parts because they are more efficient and last longer. Saving money in the short term by using less expensive parts can wind up costing more in the long run.

Toyota is one of the most popular automakers in the world who has been producing exceptionally reliable and long-lasting cars for many years. Its name has long appeared on reliability lists, frequently appearing in the top five or ten.

Toyota’s models have consistently ranked at the top of their class in terms of reliability.

Finally, if you are looking for a well-built car that drives well, gets you from point A to point B and does not spend more time in the garage than it does on the road, Toyota should be your go-to choice!