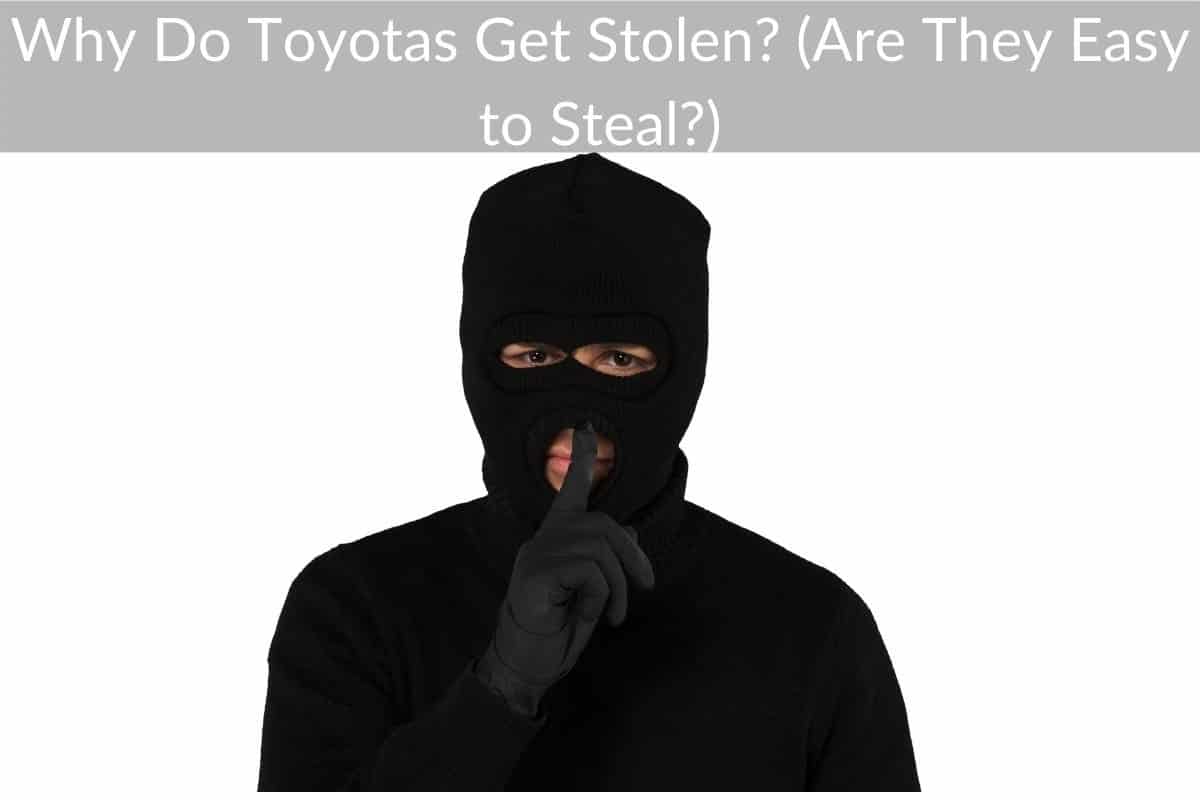 You have to consider the possibility of your car getting stolen. You don’t necessarily have to have a luxurious car to have it stolen either. Most times, thieves steal cars because it’s convenient for them, and they see an opportunity to do so.

Toyotas, however, are a different story.

Toyotas often get stolen because they’re popular. Toyotas are some of the most commonly used cars in the automobile industry so they are harder to track down and it’s easier for the thief to blend in.

Toyotas also come with a degree of reliability and durability that other cars don’t. This reliability makes them popular when they’re new, but additionally, they also have a target on their back.

Toyotas get stolen because they’re popular and have a high resale value. The high resale value means that a thief could steal your Toyota regardless of being an older model; the stolen car would still get the thief some return.

Toyotas have the greatest resale values of any car company.

Toyotas are also one of the most common manufacturers in the automobile industry, and they have a variety of models in their line. Toyotas have an option for each of the demographics they may encounter; they have normal cars, jeeps, SUVs, and even hybrid cars for those looking for more environmentally friendly alternatives.

Could it be that Toyotas get stolen because it has more varieties out there?

In the rest of this article I will be looking over some of the reasons Toyotas get stolen and also go into if they are easy to steal.

Are Toyotas Easy To Steal?

When people hear about Toyotas being stolen their forst thought might be that something about them makes them easier to steal than other cars. But is that the case?

Toyotas aren’t any easier to steal than other cars like it. However, Toyotas are extremely popular and this popularity can make thieves want to put in extra effort into stealing Toyotas.

Thieves also continue to steal, knowing that they can resell Toyota cars or their parts much more easily than more niche cars.

Toyotas have a huge demand, even in the used cars category. Since they’re so reliable, people want to buy them even more. So, something that makes your Toyota susceptible to theft is its high demand.

How Are Toyotas Stolen?

I’ve already talked about one of the reasons that someone may steal a Toyota. However, if we take a closer look into how they’re stolen, you can also take steps to help prevent the theft from ever happening.

Newer cars come with keyless entry, and the models from Toyota are no different. Hence, cars are used to responding to a key fob from a few feet away.

Thieves now have certain transmitters and amplifiers that let them unlock your car and turn on the ignition. These devices enable thieves to drive off with your vehicle by intercepting the signal from your key fob.

This method of stealing is usually employed by seasoned thieves who know what they’re doing.

In this technique, the thieves will jam the signal for locking the door, giving them complete access to your car. They may still need more time to get your car working, but if you have a button start on your ignition, the thief can likely steal your car.

Picking It Up With A Tow Truck

If thieves have their sights set on your vehicle, they may even bring in a tow truck to move it physically. In this case, there’s not much you can do to protect your vehicle.

However, there are some safety measures you can take.

Safety Measures You Should Take To Avoid Car Theft

If you own a Toyota (or any car really), and you live in a high crime area, you will need to take certain steps to stop thieves from stealing your vehicle. If you leave your car unprotected, it will likely get stolen.

1. Keep Your Toyota In The Garage

The more places a thief has to break into, the less likely they will be to steal your Toyota (or other vehicle). Keeping your car in your home garage adds a layer of protection so that it’s not stolen.

Your car may already come with an alarm. But, the older a car gets, the more likely the factory alarm is to go off at the weirdest of times. This inconsistency will make you ignore that alarm even when you’re in a state of emergency.

Switch the factory-installed alarm with one that’s more sensitive and can alert you better if someone attempts to steal your vehicle. There are many improved alarms available in the market to choose from.

3. Add A Kill Switch To Your Toyota

Whether your Toyota is old or new, it should have a kill switch installed. If it doesn’t come with a kill switch, you should talk to an auto mechanic and have them install one.

Doing this means no computer in the world can help a thief get into your car. Your mechanic will install the kill switch in a way that means once it’s triggered, the supply of the fuel tank is cut off.

You can trigger the switch if you’re in a sketchy neighborhood or even if you’re on your own and stop anyone trying to get in your car.

4. Add A Tracker In Your Toyota

Most cars now, including Toyotas, come with a GPS tracker. So, even if it does get stolen, you can track it down.

If someone’s well versed in stealing Toyotas, they likely know how to disable the built-in tracker. To avoid this, add another physical tracker that will tell you your car’s position, which the thief is less likely to disable.

Toyotas are not any easier to steal than other cars. However, they are cars that thieves are more likely to steal because of their popularity.

There are also many ways that a thief may steal your Toyota, as some of them become well-versed in the act of stealing cars with sound resale values

Toyotas are like a beacon for thieves, but the likelihood of your car getting stolen decreases when you make the car more difficult to steal. You can do so by taking measures to keep it protected and in everyone’s sight, so a thief has to think about it a few times before making a move.