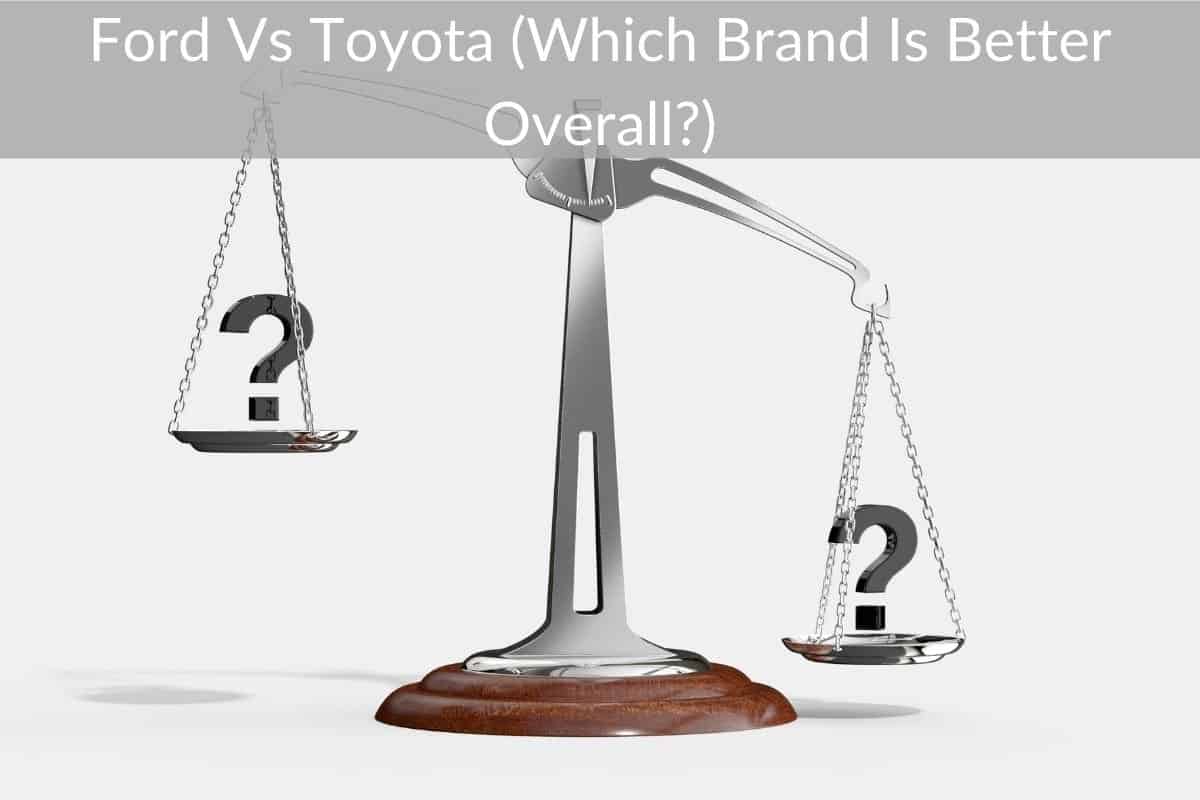 When you are planning on buying a new car, there are plenty of brands for you to choose from. Toyota and Ford have proved to be two of the most popular, each generating a lot of fans.

But which one is the best?

Ultimately, the best type of car for you will depend on exactly what you are looking for. Fords are known for their superior performance and power and can often have cheaper up front purchase prices.

Each of these brands comes with a range of pros and cons. Keep reading to learn more about how Toyota and Ford compare.

This is one of the most important elements to consider when buying a new vehicle. After all, you don’t want a vehicle that is constantly breaking down.

In this area, Toyota has the edge. The 2021 J.D. Power survey found that Toyota had 98 issues per 100 cars sold over a 12-month period. This makes it one of the top brands on the market.

On the other hand, Ford had 130 problems per 100 vehicles. This puts it towards the bottom of the pack. It performed worse than the industry average.

As a result, Toyotas will be the most durable option of the two. Many of the Toyota cars that they have sold within the last decades can still be seen on the road today.

However, if you take care of your Ford, it will also last for a long time.

Ford Vs Toyota Ease Of Maintenance

When you are purchasing a new car, it’s important to consider how easy it will be to maintain. In this area, the advantage has to go to Toyota.

They offer two years of regular maintenance as part of their Toyota Care program. It also includes two years of roadside assistance.

Ford has a similar program, but you will need to pay to access it.

Thankfully, most models of Ford and Toyota are fairly popular. Because of this, you shouldn’t have too many problems finding compatible parts if you need to do repairs.

Plus, there are plenty of authorized dealerships that will be able to help you with any mechanical problems that you might be facing.

Generally, Fords tend to be bigger. They offer more trucks and SUVs; these are aimed at people who want a high-performance vehicle.

On the other hand, the Toyota range tends to be more practical. They have a greater appeal to families. Both of these car manufacturers have a range of vehicles for you to choose from.

This includes several well-known vehicles, such as:

Ford Vs Toyota Country Of Origin

Another element to consider is where the cars were made. This shapes the way that the design team was thinking during the manufacturing process.

Generally, Ford tends to place a greater emphasis on the way that the car is performing. As a result, they will go faster around the track. They also want to make sure that their cars look good.

However, it can mean that some of their vehicles will be bigger. A great example of this principle is the GT supercar.

On the other hand, Toyota has a great focus on making sure that their cars are functional. While they might not be as exciting or fast as the Fords, they are the more practical option.

This has made them a popular option amongst families. The Camry is a good example of this approach.

Both of these styles have their pros and cons. The one that is best for you will depend on what you are looking for in your dream car.

This is a fairly evenly matched area. Both of these car companies offer a range of features to keep you safe on the road.

For example, both feature technology that allows them to detect pedestrians and apply emergency brakes. Because of this, both brands have models that have been recognized by the IHSS for their safety features.

How much you will need to pay for the car will depend on the model that you are planning on buying. Generally, though, a Ford will be less expensive than a Toyota. For example, you can get popular varieties like the Camry from $25,000 for a base model whereas a Ford Fusion is around $23,000.

This is because Toyotas are far more reliable and built better so they charge higher prices.

The most expensive models by each brand are:

However, let’s assume that you want the cheapest model that they offer. In this case, you would be looking at the following:

A second-hand Toyota will probably be more expensive than a second-hand Ford as well. This is largely due to supply and demand as well as longevity.

When someone is buying a used car they often want it to last as long as possible before it breaks down or needs to be replaced. Since Toyotas can go decades before needing to be replaced they hold their value better than Fords.

If you are thinking about getting a new car, you must consider what kind of warranty you will be receiving. This ensures that you are protected if the car starts to develop problems.

The good news is that both Ford and Toyota offer strong warranties on new cars.

Both Ford and Toyota offer the same basic warranty. You’ll be able to get 3 years or 36,000 miles of protection.

Though you will get a five-year powertrain warranty. This covers some of the engine components.

Another important element to consider is how customers felt about their purchases.

Both Ford and Toyota have fairly good customer feedback. However, the edge in this category has to go to Toyota. They received a score of 84, which puts them among one of the best car manufacturing brands in the world.

On the other hand, Ford received a score of 76.

Another metric that we can use to determine which brand is the best is looking at sales performance.

The winner in this area is Toyota. They are expected to sell over 688,000 cars.

This makes them the most successful car retailer in the United States.

Both of these brands have pros and cons. The best option will depend on what you are looking for in a car.

If you are focused on performance and design, you will be better off with the Ford. But if you are looking for reliability at an affordable price, you should choose the Toyota.

Ultimately, both of these brands have good reputations. So, either way, you should end up with a fairly decent car.