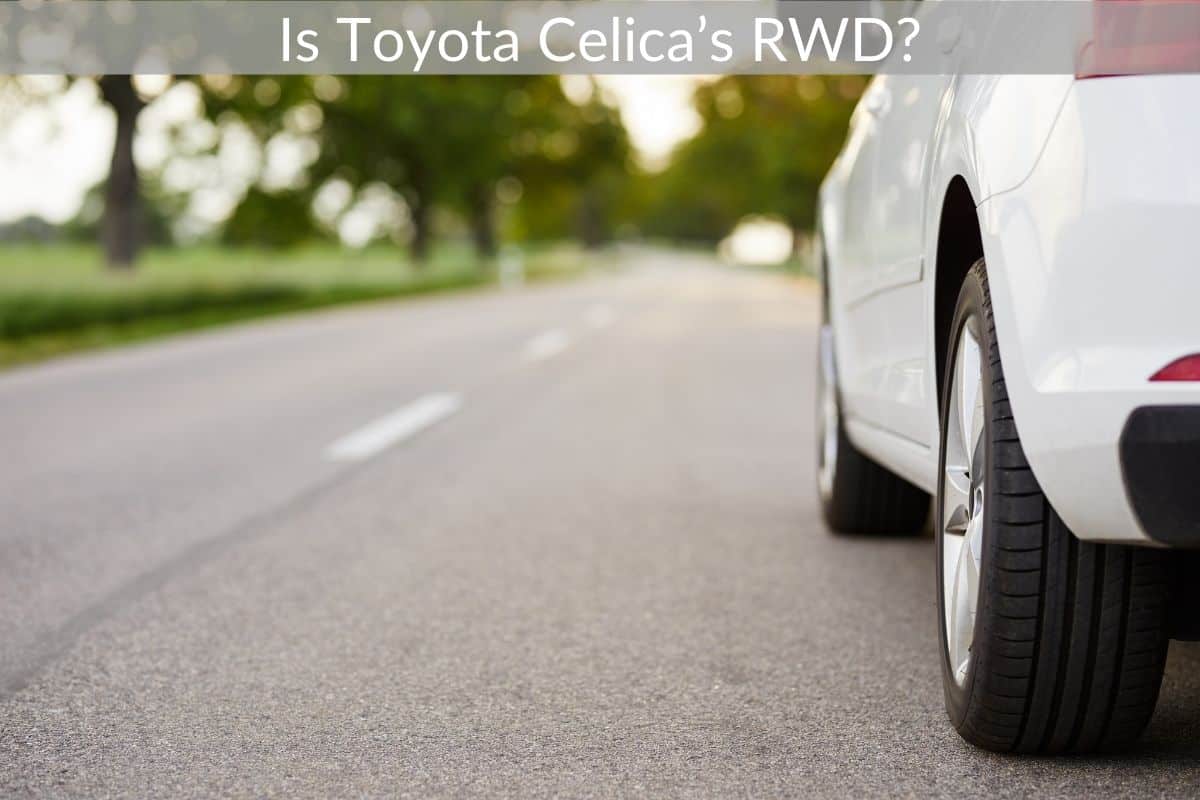 The Celica is an automobile model which Toyota manufactured from 1970 to 2006. During the first fifteen years of the car’s manufacture, it was a rear-wheel-drive or RWD. In 1985, the car’s drive layout switched from rear-wheel drive to front-wheel drive.

There were also all-wheel-drive turbocharged models offered from 1986 to 1999. So the Celica has models which have both rear-wheel drives and front -wheel drives.

Toyota Celicas have been around for a very long time, namely since the 1970s. If you’re thinking of buying one now, you’re likely looking at an older model since Toyota is no longer making them.

If you have a love for older cars, the Toyota Celica is a great choice. However, the exact drivetrain of the vehicle depends on the year that it was introduced.

RWD or rear-wheel drive is a form of drive train which manufacturers use in their automobiles. In these kinds of vehicles, the engine drives the rear wheels only. This method was the most common kind of transmission until the late 20th century.

The front wheels receive no power here for any motion, and they’re driven by the motion created by the rear wheels.

The advantage of an RWD car is that the weight is evenly spread out in the car. The front wheels have no power, so they’re free to steer the car in the direction the driver wants.

Can You Convert A FWD Celica To A RWD Celica?

You can convert an FWD Celica to an RWD Celica but it is far from cheap. Most Celica enthusiasts believe that the front-wheel drive is what limits the potential of a Celica so they might want to convert it.

However, if you want to make the conversion, you must remember that it will cost you a lot of time, money, and effort. The conversion can cost you tens of thousands of dollars and still not be the exact way you want it to be.

If you’ve got your heart set on a Toyota Celica and you want it to be an RWD, you may want to look for an older model with a rear-wheel drive and pay extra for it rather than having to convert a FWD model.

Conversion is a long and arduous process, and you’ll likely have to do an intense amount of research as to how you’re going to conduct it. If you’re not well-versed in auto mechanics, it’s going to take you a lot of time and might not end up how you want.

Is It Better To Buy An AWD Celica, A FWD Celica, Or A RWD Celica?

I have already talked about how a Toyota Celica is one of the few cars which has models which are front-wheel drive, rear-wheel drive, and all-wheel drive. So which is the one you should opt for?

First, you should know what you want in a car and what features are essential to you.

Since 1985, most variants of the Toyota Celica have been front-wheel drive or FWD. Hence, if you’re looking at a newer Celica, it’s probably an FWD.

People don’t prefer FWDs, but that’s no reason for you to reject them. Front wheel drive vehicles have their advantages.

For example, they are cheaper to design and build as the entire engine is in the engine bay and has fewer moving parts. All the moving parts are in one section, which means the car is lighter and you can enjoy better gas mileage.

FWD also offers better traction in low-power situations; if you live in a place where it rains or snows a lot, you’ll do better with a front-wheel drive. The front wheels pull the car along and carry the heavier engine, providing a better grip.

The downsides are that an FWD Celica can have horrible steering, especially if you’re driving at high speed. The front-heavy engine can create problems in steering, sometimes called the “torque steer.”

Another issue is that the front wheels are doing two things: steering and providing power, which is too much and not an ideal situation.

Some people prefer RWDs as they don’t pose these problems. However, they’re not good in rain or snow.

All-wheel Drives are those cars that should be perfect, in theory. It should be the best of both worlds, and it is to a degree.

One of the major advantages of an AWD Celica is that it has excellent traction. Regardless of the conditions of the road, you and your family will be safe and in control.

The two major disadvantages of an AWD are the weight and the cost. AWD cars are heavier than similarly sized FWD or RWD cars, affecting the car’s acceleration and fuel economy. AWD setup also costs a lot since there are so many components, and thus, it’s more expensive.

Toyota Celicas can be RWD, but they offered all sorts of drivetrains over the years. There are advantages and disadvantages for each one, so you should assess your needs and preferences before deciding on a Toyota Celica.

You should also understand that you’re less likely to find on-hand help if a problem occurs since it’s an older car.

You can also find an FWD Celica and convert it to RWD, but this requires a lot of money and a significant amount of knowledge of how the conversion works.

You should also know that the conversion can leave your functioning car non-functioning if you don’t do it right.