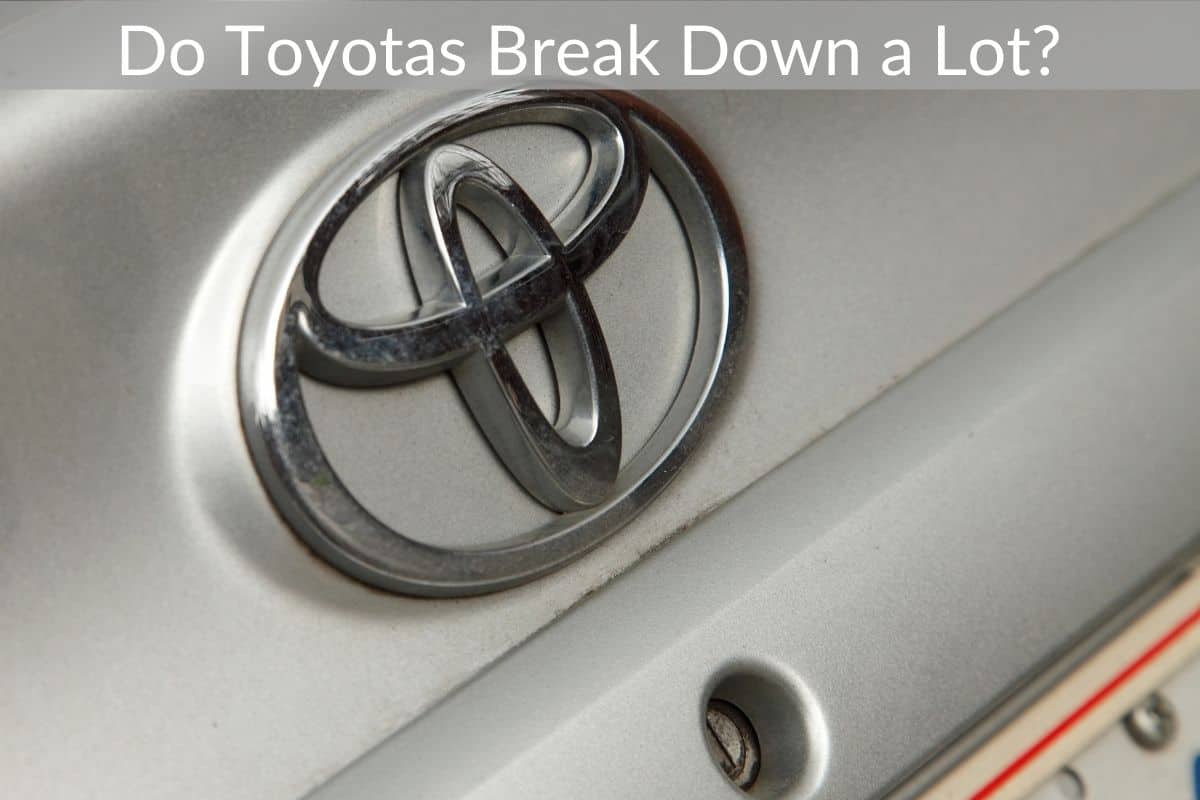 If you are wanting to purchase a new car you will want to get one that is dependable and will last as long as possible. Afterall, you are spending tens of thousands of dollars on your car so you don’t want to spend thousands on repairs.

If you are considering getting a Toyota you will want to know if they break down a lot.

Toyotas don’t break down very often and are designed to be very dependable. They have been on multiple reliability charts, being present in the top 5 positions consistently.

Toyota is hailed for their reliable cars. The reason behind this could be the fact that they have a very simple car model, which is why preserving the quality of these cars is easier.

Toyota also has intensive quality control measures that ensure the cars it manufactures have the best possible  reliability.

In 2016, Toyota was the World’s biggest car manufacturer. Toyotas are termed reliable not just by lists on the internet but by many of their customers.

Toyota’s popularity has much to do with its dependability and the fact they don’t break down as often. Reliability in automobiles means the duration of time that can elapse without failure.

Toyotas operate fairly well, proving their reliability; so, a total breakdown is a rarity.

Toyotas have a good reputation among car owners. According to Consumer Reports’ annual rankings related to reliability, Toyota ranks second with a score of 78 out of 100. Due to this reliability, customers get attached to Toyota cars, and they find purchasing other brands difficult.

However, there are some very intrinsic aspects of Toyotas that make them so reliable. Read on as I will tell you why Toyotas don’t break down a lot.

Why Don’t Toyotas Break Down a Lot?

Toyotas are reliable for several reasons, and some of these are as follows:

Within the automobile industry, competition is always high, which makes car manufacturers innovate rapidly. This rapid innovation means they feel the need to introduce new features in their upcoming models constantly.

Toyota is different; it takes its time adding new features to the car. Manufacturers develop new features in Toyotas after they have gone through a great deal of time and money on research and development for these features.

It also ensures the features introduced are safe and have the greatest reliability. This extensive quality control means your Toyotas are less likely to break down.

If the company has any doubt about the functionality of any new feature or if that feature will stand the test of time, it would rather conduct further research instead of applying the feature on the cars for customers to use.

This has much to do with the fact that Toyota is a Japanese brand, and they’ve built their popularity on being thorough and reliable. The Japanese also have a more conservative approach towards business and innovation.

Thus, Toyotas are thus undeniably different from other cars they compete with. Toyotas also are more likely to have well-thought-out quality features instead of the newest, flashiest addition in its newer models.

2. Toyota is all about the functionality

There are automobile companies that look into

aesthetics very heavily and give more weight to introducing things in quick succession as a way to gain relevance. However, for Toyotas, the purpose of a feature or the car takes precedence over the car’s aesthetics and image.

Since there’s such an emphasis on functionality in Toyotas, they are less likely to break down.

They rarely break down, and even if they do, you can fix them easily since the spare parts for Toyotas are relatively cheap.

Toyotas aren’t ugly or lacking in aesthetics either; however, the focus on functionality means that Toyotas are more likely to last you for a long period. They have also been declared as one of the best cars for people to own in the long term due to their superior features, cost-efficient spare parts, and overall functional design.

For all the reasons above, Toyotas don’t break down easily. This fact is especially great for people who want to buy trucks or SUVs for long road trips.

Toyotas are less likely to give you trouble throughout the time you own them. When you no longer require your Toyota, you will also get a much higher resale value with many Toyotas selling used for 50% of the original value.

This percentage might seem low but it is one of the highest resale percentages in the industry.

One of the best aspects of Toyotas is their cost-efficiency, and that they last for a very long time. This long-term ownership means they will cost you less in the long term.

When you buy a new car, don’t just factor in its cost upfront. Instead, you should consider the price of owning it long-term. This fact means that you have to understand that it will come with maintenance costs and repair costs, all of which you need to take into account before making a purchase.

Toyotas rarely break down, which means you’re less likely to spend a ton of money on them for repairs.

They also rely on simple manufacturing, which means you’re likely to get spare parts for Toyotas very easily. These spare parts are also likely to be of great quality, which means they’ll not give up on you in the middle of an excursion.

Since it’s easier and more cost-efficient for you to maintain a Toyota, you’re more than likely to do it.

This fact, in turn, means that Toyota is less likely to break down.

Toyotas don’t break down a lot. They have intrinsic features designed in a way so they can last for a very long time. Toyota has also optimized its manufacturing practices in a way that allows for the company to be on top of its production processes.

This information backs up the fact that Toyota manufactures very reliable parts. These parts and features are less likely to fail; therefore, a major or minor breakdown is out of the question for a new Toyota. The company believes in conservative innovation, which means it goes through rigorous research and development practices and significant quality control.

So, if they introduce new features, the functionality of the car isn’t altered.

Due to these reasons and many others, Toyotas are more reliable and less likely to break down. They are also likely to last you a long time as the manufacturing process that is in place is all about producing quality vehicles.