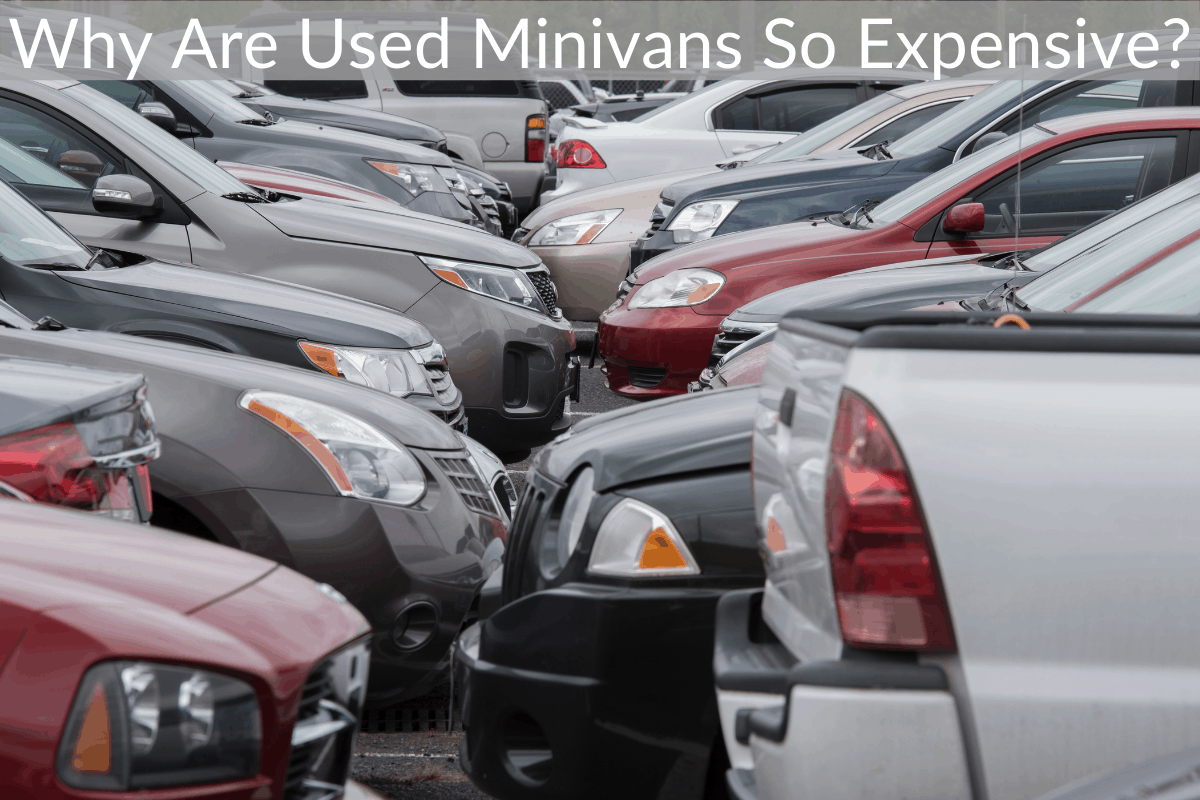 Minivans are a great way to head off on an adventure with your family and friends and take a bit of time off from the daily hustle-bustle of life. It is a convenient enough way for anyone to take short trips with the family to nearby places or they are also good for road trips as well.

Of course, to be able to take your family on a road trip in a minivan requires you to own one. People who are in the market for a used minivan will likely notice that they are relatively expensive (but still cheaper than used SUVs).

Minivans are rarely ever driven hard and they are often owned by an older and more mature demographic. That means they will normally be well taken care of which causes the prices for used models to stay a bit higher.

Minivans are also incredibly useful vehicles as they can be used for hauling people, tools, or even furniture and appliances. This means that minivans have more demand on the used car market so they command a bit of a higher price.

Minivans are also often not sold as quickly as an SUV or cars when they are purchased new wither since they are normally bought by families who will use them for a while.

These are just a few of the reasons why used minivans hold their value quite well. To see some of the most popular gadgets for your vehicle just click here.

Is buying a used minivan worth it?

If you are in the dilemma of whether or not to buy a used vehicle, (specifically a minivan) then I am here to help make that decision a little bit easier.

Below, I will cover a few different things that you should consider that will help you decide if buying a used minivan is worthwhile for you to do or not. Some of these will be more important to you than others but you should at least consider each of them.

Even though sometimes used cars don’t have a significant discount when compared to new ones, more often than not you can save a decent amount of money by buying a used minivan instead of nes.

Even without going into the specific numbers, it is quite evident as to why used minivans will cost less.

When you are going to buy a minivan from the showroom directly, many additional expenditures will be associated with the purchase, but when you are to buy a second-hand car those adjacent expenditures are often already taken care of.

Also when buying a used minivan the original owner will have taken the large hit on the original depreciation so you can save money because of that as well.

Less worry about damaging it

When you are driving a brand new car, you would probably feel better if you could just keep it parked in your garage and look at it. In your subconscious, you will always be worried about whether a dent or scratch were to happen to your new car.

With a used vehicle, there are far less of these worries.

The car is already tried and tested and probably has its fair share of small scratches or even dents. Not having to worry about your kids getting it a little dirty or accidentally hitting it with a toy is actually quite nice.

Let’s be honest here, no one really likes dealing with salesmen at a car dealership but when you are buying a new car you will HAVE to deal with one.

With a used minivan you could still have to deal with a salesman at a lot but you can also buy used vehicles from individuals and avoid the high pressure tactics or them trying to upsell you on a more expensive vehicle that you don’t need.

I’ve purchased 3 different used vehicles from regular people over the years and honestly they were the least stressful transactions even when compared to buying a used vehicle from the dealership.

Now obviously when buying from a person you don’t have their reputation to go off of so you have to make sure you know what to look for with the car but not having to deal with salesmen is a nice perk of buying used.

Not everything is great about buying a used minivan vs new or everyone would only want to buy used.

The biggest issue with buying a used minivan (or any other used car) is that you might be buying someone else’s problems. This can happen pretty easily if you aren’t a mechanic or don’t take the used vehicle to one before buying it.

For example, I had a friend who purchased a used car that knew absolutely nothing about it except it was referred to her by a friend of a friend. 6 months later the car blew a head gasket and it was thousands of dollars to repair.

Now obviously not every person selling a used car will be doing that but it is one of the major cons when buying used instead of new which is why I wanted to mention it.

If you aren’t very mechanically inclined then only buy used from a reputable dealership or make sure to take along someone who knows cars when you go to look at it.

Where to find cheap used minivans?

Used cars/minivans have their own merits, sure, but they don’t always guarantee the best service. It depends on how old the car is and where you buy it from.

If you are lucky then maybe one of the people you know would be willing to sell their car and you could buy it from them, but far more often luck is not so much in our favor and you have to buy it from a stranger or dealership.

There are actually many places where you could find a good deal on a used car but the best deals require some digging.

First and foremost, there is the online option. Various sites sell used cars and there are also many sites (such as Cars,com) that will have virtually all the used cars from all dealerships in your area.

The best part about buying cars online would be the fact that you can easily compare all of the dealerships in your area and what inventory they have before you ever go to the lot. This will help in keeping you from getting sucked in on a higher priced vehicle and will also give you a decent understanding of what the market price is for a used minivan in your area.

Another option online is to check out places like Facebook Marketplace and Craigslist. There will be some dealerships that have their cars listed on there but a lot of normal people will list their personal vehicles for sale there too.

Facebook and Craigslist will allow you to get the best possible deal on a used minivan but also expose you to the most risk. If you aren’t mechanically inclined and don’t have a friend that is then you should never buy a used vehicle off an individual without taking it to a mechanic and paying them to look it over.

Whether or not you would be willing to buy a used minivan is a choice you would need to make. We can guide you and direct you towards a decision we feel would be the best but ultimately only you can decide.

Second-hand vehicles have many different pros to them with the largest one being saving some money. However, if you don’t carefully check out the used vehicle before buying it then you can easily end up with more headaches than the car is worth!