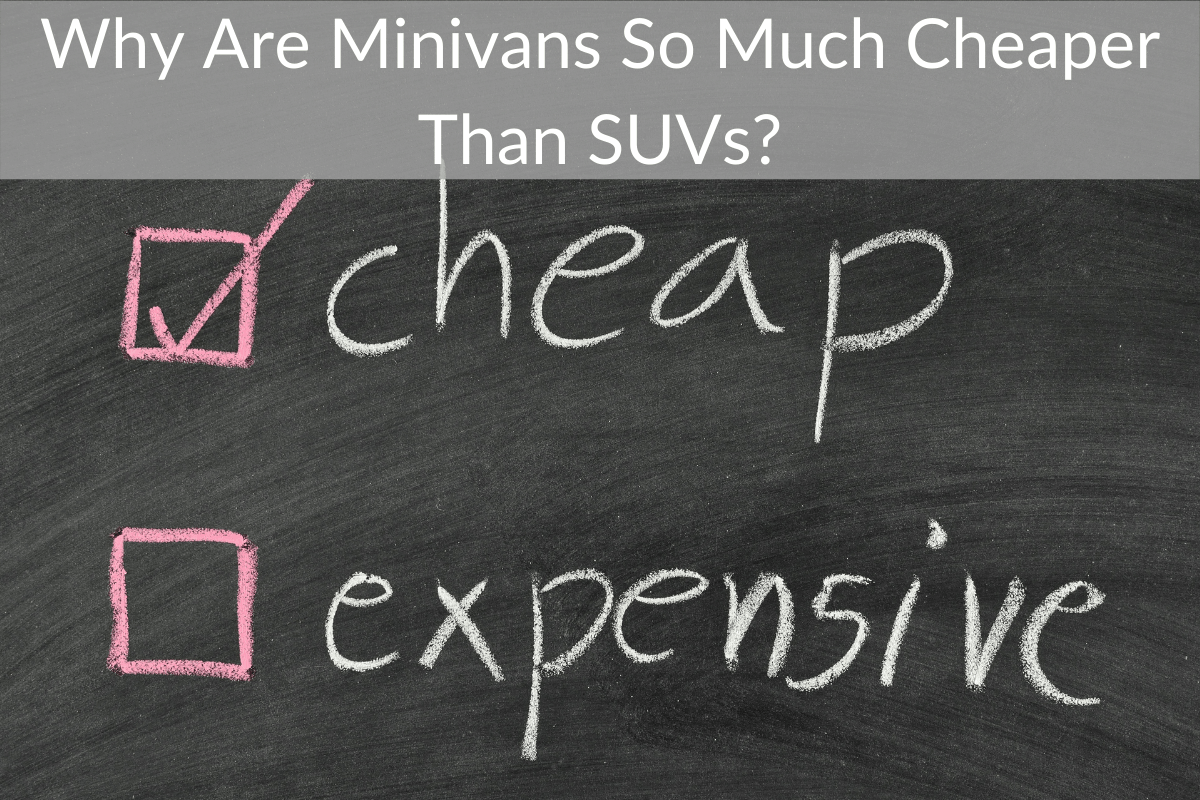 When you are looking to buy a new vehicle you will often be faced with many dilemmas. The first of all of the dilemmas is to try and answer the question as to what would be the purpose of the vehicle.

Once you are sure about the purpose of the vehicle you can narrow down your options to a certain category or a couple categories of cars.

Now say, you are thinking about a vehicle that could accommodate your family for a road trip or maybe a short trip to some nearby place, then you likely have narrowed down your choices to a large vehicle such as a minivan or an SUV.

Often when people compare a minivan and SUV they will notice that minivans are  far cheaper options and wonder why that could be.

The main reason why a minivan is cheaper than an SUV is because of demand. SUVs are in higher demand because most people feel they are nicer looking and not as much of an “old person’s car”.

Minivans are actually more spacious, can seat more people comfortably and also have more luggage space but despite all of that they can still be purchased for less than an SUV.

Quite simply, many younger people don’t want to buy a vehicle that they will feel embarrassed to drive around and that is how many of them feel about minivans.

This is the main reason why you can buy a new minivan at a significant discount to an SUV.

Are all minivans cheaper than SUVs?

Minivans were introduced in the market between the period of around the 70s and the 80s which is also when their popularity was at its peak. Minivans fell from this apex of their fame when with time other models of similar vehicles came out that were seen as being “cooler” (SUVs).

With a fall in the demand for minivans, their prices also started to drop.

Right now SUVs have immense popularity and so their prices are pretty high as well (especially when compared to what they offer).

You can get some SUVs for cheaper than minivans but only if you aren’t comparing similar sized vehicles or are looking at top of the line minivans vs the base model SUVs.

To get an SUV that is comparable in size/capacity as a minivan you will have to spend somewhere around 40-50k on it. Since most new minivans (except the top trim levels) are 25-35k you can expect to save anywhere from $5,000-$15,000 when buying a minivan instead of an SUV!

So when compared apples to apples you will see that all minivans will be cheaper than similarly sized SUVs.

However, there are many smaller SUVs (sometimes referred to as crossovers) that can be purchased for around the same price as minivans (or even cheaper) however they typically only have room for 5 passengers and much less luggage storage as well.

If you like the looks of an SUV far more than a car or minivan but don’t need tons of extra space then buying a small SUV/crossover can allow you to buy it for around what you would spend on a minivan.

What are the advantages of a minivan over an SUV?

Everything has its good side and bad side but in this section I want to cover some of the different aspects of minivans that in my opinion make them a great choice when compared to similarly sized SUVs.

I have already discussed this advantage a little bit but it bears mentioning in this section as it’s one of the big advantages that minivans currently have.

You can buy a full size vehicle that can haul 7-8 people plus their luggage for less than many SUVs that can only hold 5-6 people (and often less comfortably).

Getting a larger vehicle for less money is one major factor that affects the decision to buy a minivan over an SUV for many people (myself included).

A minivan’s interior guarantees a sense of comfort and coziness. They have enough space inside so that they can easily accommodate all the members of an average-sized family.

SUVs will often have the same seating capacity (or close to it) but when you go and look at how many people can comfortably sit inside it’s often only 5 people vs 7-8 in a minivan.

Because of the way that minivans are designed there is tons of legroom and headroom with every seat from the front to the back whereas the third row seats of SUVs are really only useful for younger children (since they have much less legroom and headroom than the second row).

A minivan can store a lot of your stuff in the huge cargo space that it has under the floor of the second row (in Dodge/Chrysler models) or behind the third row (in all minivans).

This extra space is especially useful when you are going on a long road trip and would need to carry most of the items for yourself and your family. Minivans have much more space in the trunk than even full sized SUVs do so they easily beat them in storage as well.

Quite honestly the only thing that SUVs do better than minivans is their design and they are better off-road (which many people never take them anyway).

What are the advantages of an SUV over a minivan?

Large SUVs that have three rows can serve as quite good alternatives for a minivan albeit a more expensive one. Here are the advantages that make them a better option than a minivan in certain respects:

Even in the worst of terrains and the harshest of weather, an SUV can and will give you a better service than a minivan. They also have a higher ground clearance compared to minivans which can help in snow or when parking in uneven lots.

The higher ground clearance will also help them to a great extent when travelling across rocky terrains or inclined roadways. In a nutshell, minivans are tough, sure, but full sized SUVs can prove to be tougher still.

Honestly since most SUV drivers never go off the pavement this is really the only reason why SUVs are better than minivans.

No one wants to be caught driving a soccer-mom minivan so instead they buy an SUV.

What is ironic though is that so many people nowadays have SUVs that it is driven by far more soccer moms than minivans!

The design of an SUV is far better than that of a minivan for sure but only you can decide if that makes it worth the extra 5-15k (or more)!

As you likely know by now I’m honestly not a huge fan of SUVs simply because they are so much more expensive than minivans. If both vehicles were more similar in price I would 100% be more willing to recommend an SUV over a minivan but as it stands now I really don’t feel like the design is enough of a difference to justify spending the extra money.

If you have a family of 5 or less then getting a smaller SUV/crossover can be a great compromise as you will be able to get one for a similar price as a minivan while also getting the better design of an SUV.

However, that is hardly a fair comparison being that minivans are much larger, can hold 7-8 people plus luggage, and generally have far more uses.

Ultimately you have to decide what vehicle is best for you but for myself… I’ll just keep hauling my family around in my cheaper minivan.

link to Best Oil FIlters For A 5.7L Hemi

Oil filters are a big investment, and you want to make sure that you have the right one for your engine. There are a lot of different types of oil filters out there, and some are better than others....

Your vehicle's parts will need to be maintained and cleaned after a period of use. Cleaning some components, such as motor and fuel transmission systems, necessitates the employment of specific...