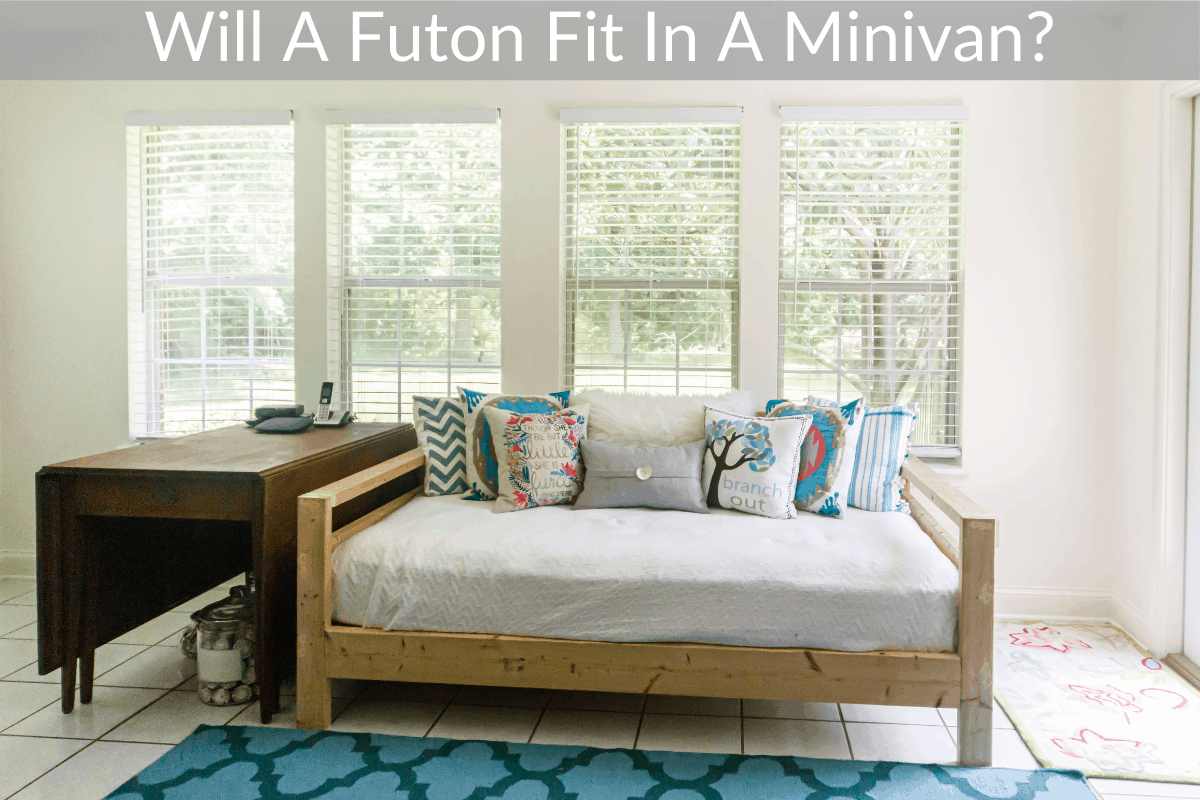 It doesn’t really matter if you are  trying to get your new futon taken home or if you are simply trying to move a futon to your new house, either way you will need to know what vehicles that it will fit inside of.

Specifically in this article I will be talking about fitting your futon inside the back of a minivan and whether it will fit or not.

Futons will fit inside of your minivan without any problem since they are easy to fold or maneuver. You can actually fit a futon on top of the second and or third row seats without removing them or laying them down.

If you are wanting to move an entire futon frame and mattress without disassembling it then you can do that in a minivan as well. The typical futon frame is 80” long and you can fit up to 96” long inside the back of a minivan with the seats removed or folded into the floor.

So no matter if you are moving just the futon mattress or the futon frame as well both will easily fit inside your minivan but it’s just a matter of whether you have to fold or remove all of the seats or not.

When hauling just the futon mattress, it is often easier to simply lay the back seats down and then put your futon inside rather than having to shove it on top of the seats while they are up. Since futons are so easy to fold they can fit in your minivan in a variety of ways.

For example, you could fold down the second row seats, put people in the third row and then put the futon where the second row was which means you can easily haul 5 people and a futon in your minivan.

The best way to fit a futon inside a minivan

The best way to put a futon in a minivan can vary depending on if you are moving just the futon or the frame as well.

What if the futon frame won’t fit in your minivan?

As we have already discussed the entire futon and frame will fit inside of a minivan without having to take it apart but if you have already put a bunch of stuff inside the minivan then what can you do?

At that point you are really left with two options, either disassemble the frame entirely to try and get it to fit or simply leave the frame behind.

If at all you’re on the verge of having to move out pretty quickly or if you don’t have enough space inside your van for the frame to fit then leaving the frame behind might be your only option.

This obviously isn’t an ideal scenario but sometimes when you are moving you have to make sacrifices.

How to best fit a futon inside a minivan?

If you are trying to save as much space as possible you will want to get a rope to fold the futon as small as possible. Many people will fold it in half and then roll it up before tying the rope as tightly as possible. This will help the futon take up less space than it otherwise would.

If you are at all worried that the futon will get untied on its own, you can also put it inside a large trash bag to help it stay folded up and also stay clearer too. This will make sure your futon is not haphazardly moving as well as reassure that the cloth area of the futon is safe from any mess inside the minivan whatsoever.

If it isn’t feasible to roll the futon up, then you should resort to folding it down as compactly as possible and then cramming the entire thing inside the trunk or in your minivan behind the backseats.

It will stay put, regardless.

It is not mandatory to take your frame along with the futon inside your minivan as you could make two round trips and get it that way (if you already have stuff in your minivan or you can also put the frame and futon mattress in the van first and then pack everything in around it.

This is the best way to do it as you don’t have to worry about the frame or mattress not fitting or having to leave one of them behind. .

So, now that you’ve learned a futon and a futon frame can fit into a minivan as long as the seats are laid into the floor or removed you won’t have to worry about it not fitting.

If you are planning on hauling a lot of other items along with your futon and frame then taking the frame apart will allow you to fit a lot more stuff in your minivan but that definitely adds a lot of additional hassle to moving it so I personally would just put the futon mattress and frame in the minivan first and then fit everything else around it.