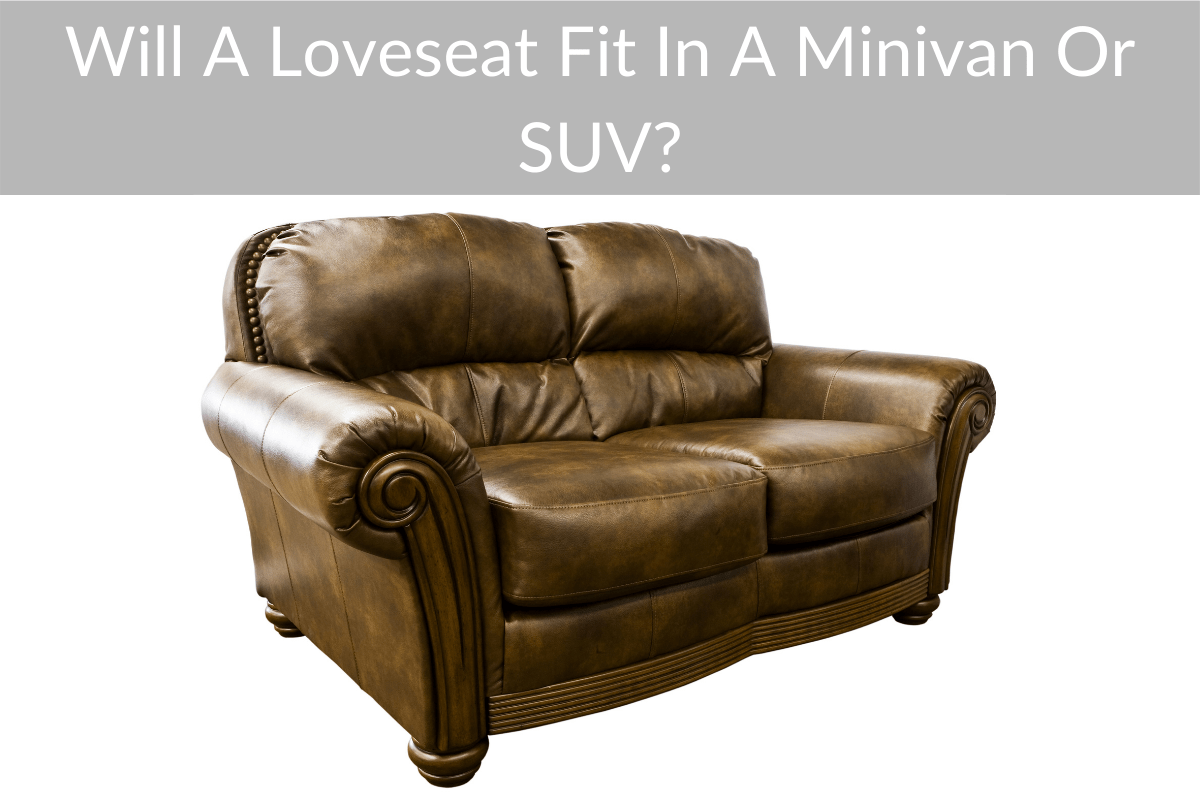 If you are considering purchasing a loveseat but you don’t own a truck and don’t have any friends that you can borrow one from then your next option is a minivan. Yes, minivans are great for hauling luggage and cargo but will they actually fit a loveseat in them?

A loveseat will easily fit in the back of a minivan with the third row seats either removed or folded into the floor. A typical loveseat is 52” long which means that it will fit behind the second row as that space is about 55” on most minivans.

In practical terms what that means is you can have 4 adults and a loveseat in your minivan at the same time since the loveseat will fit behind the second row of seats!

Almost all minivans have the same size cargo area so whether you have a Chrysler, Dodge, Honda, Kia, or Toyota minivan the loveseat will fit behind the second row seats in all of them as long as you remove or fold down the third row.

When moving the loveseat in and out the minivan you will have to be careful so as not to tear up the carpet or scratch the walls but as most loveseats are relatively soft on all sides this isn’t a huge issue.

Since the loveseat is being moved inside of a closed area you don’t have to worry about it flying out or even trying to strap it down either! Since it is larger there is also no danger of it flying forward in an accident or when braking fast since it won’t fit past the second row of seats.

If the loveseat you are going to be moving is an oversized model then it is a good idea to measure the length of it before you attempt moving it. Some oversized loveseats will be slightly longer than the 55” so while they will still easily fit in the back of the minivan you might have to slide the second row seats forward or remove them entirely.

It’s rare that a loveseat is that long as then it starts to get into the size of a couch but it can happen so taking the time to get a quick measurement of the length is a good plan so you don’t have to move those seats and not have enough room for the passengers in the back as well.

In the rest of this article I’m going to look specifically at a few popular minivan models and give their dimensions so you can make sure that the loveseat you are planning on moving fits inside of it. Remember, it’s always better to measure the specific loveseat and the minivan you will be using if the measurements are really close.

Minivans that can fit a loveseat

All of the minivans that are currently on the market can easily fit a loveseat inside of them but how easy it is to do is what varies from model to model.

By far the easiest minivan to haul loveseats, couches, or even plywood is the Chrysler or Dodge minivan models (Town & Country, Pacifica, Voyager, Grand Caravan). This is because these models all offer stow and go which means the second and third row seats easily fold into the floor leaving tons of room to haul a loveseat or virtually anything else that you want.

The other minivan models can fit a loveseat but you have to do some extra work to make it happen.

For example, the Toyota Sienna, Kia Sedona, and Honda Odyssey will all fit a traditional loveseat in the back of the vehicle by simply folding down the third row of seats. However, if the loveseat is longer than normal you will either have to partially fold up or even entirely remove the second row of seats which can be time consuming and frustrating as well.

With the Chrysler and Dodge minivans you just have to fold the seats right into the floor and you are ready to load the loveseat in just a minute or two.

Can you fit a loveseat in an SUV?

If you don’t have access to a minivan or you have an SUV that you aren’t concerned about possibly damaging or getting dirty then you may want to haul your loveseat in that SUV instead, but will a loveseat fit?

Surprisingly, a loveseat will fit in the back of virtually all SUVs on the market as long as the second and third row seats fold down. These seats need to fold down to allow the loveseat to fit lengthwise.

A loveseat will even fit in a smaller crossover type SUV such as the Ford Escape as it has 68” of room behind the first row when the second row is folded flat which leaves plenty of length for a loveseat as they are normally only 52” long.

You also don’t need to worry about height as the standard loveseat is only 21” tall and the ceiling height even in smaller SUVs will be over 30”.

How to fit a loveseat in a Chrysler Pacifica?

Fitting a loveseat in Chrysler Pacifica really can’t get any easier! All you have to do is fold down the third row seats into the floor (by either the push of a button or the pull of two levers) and you are ready to put the loveseat inside.

The Chrysler Pacifica makes removing your minivan seats a thing of the past since you can now easily fold them down which makes moving things a virtually hassle-free process.

Even if you are going to be hauling an oversized loveseat or even a couch you can still do so easily in a Pacifica. You simply have to move the driver and front passenger seats forward and then fold the 2nd row seats into the floor as well. Again, this process is done with either a button or lever depending on the model.

When people think about hauling construction materials they will obviously think about using a truck first, but what if one isn’t available? Can you haul large sheets of wood or drywall in a minivan?

You absolutely can haul 4×8 sheets in a minivan! You simply have to fold down or remove all of the rear seats (depending on which make and model you have). You can then easily fit the plywood, drywall, etc. in the back of the minivan!

Of course one important thing to keep in mind is you will likely scratch up the walls by the rear wheel wells so if that will bother you then you shouldn’t use a minivan to haul 4×8 sheets. You will also likely get the floor dirty or even damage it so putting down a tarp is a good plan.

Can you fit a couch in a minivan?

A loveseat is basically a two-seater couch and we know that size will fit, but what about a full size couch? Will it fit in a minivan or will it be too long?

A full size couch is approximately 80” long so as long as you fold down or remove both the second and third rows of seats then a couch will fit in the back of a minivan as the back is 96” long on virtually all models.

That means even if you have an extra long couch it should still easily fit inside the rear of a minivan as there is about 15” of extra space on top of the length that a standard couch needs.

Can a futon fit in a minivan?

Another furniture item that many people wonder about fitting inside of a minivan is a futon. Will a futon mattress and frame fit?

Futon mattresses easily fold or roll up so you will have no issue fitting a futon mattress in a minivan. A futon frame is typically 80-85” wide so that will fit longways in a minivan as long as you fold down or remove the 2nd and 3rd rows of seats.

You can leave a futon mattress and frame together when putting it in the back of a minivan but that will be pretty heavy so most people separate them and then load them individually.

Can a full-size mattress fit in a minivan?

When hauling a full size mattress it will easily fit in a minivan since you can have it at an angle. However, if you are wanting to lay it flat in the back to sleep on it will be 5” too wide so it won’t lay entirely flat.

It will still fit since it will only be hanging over 2 ½” on each side but not perfectly.

You will also have to either remove or lay down both the 2nd and 3rd rows of seats if you are planning on sleeping on it as it’s 75” long and the space behind the second row is only 55”.

However, if you are only hauling the full size mattress then you can easily fold it in half and it will fit just fine behind the 2nd row of seats.

I hope this article has been helpful in answering your questions about putting a loveseat in a minivan or suv and whether it will fit. Both minivans and SUVs can fit a lot of cargo and even furniture inside of them but the easiest way to know what exactly will fit is to break out the tape measure and measure your furniture and the back of your vehicle.

Or you can simply check out all the other articles that I’ve written on this site about what will and won’t fit in the back of these vehicles.