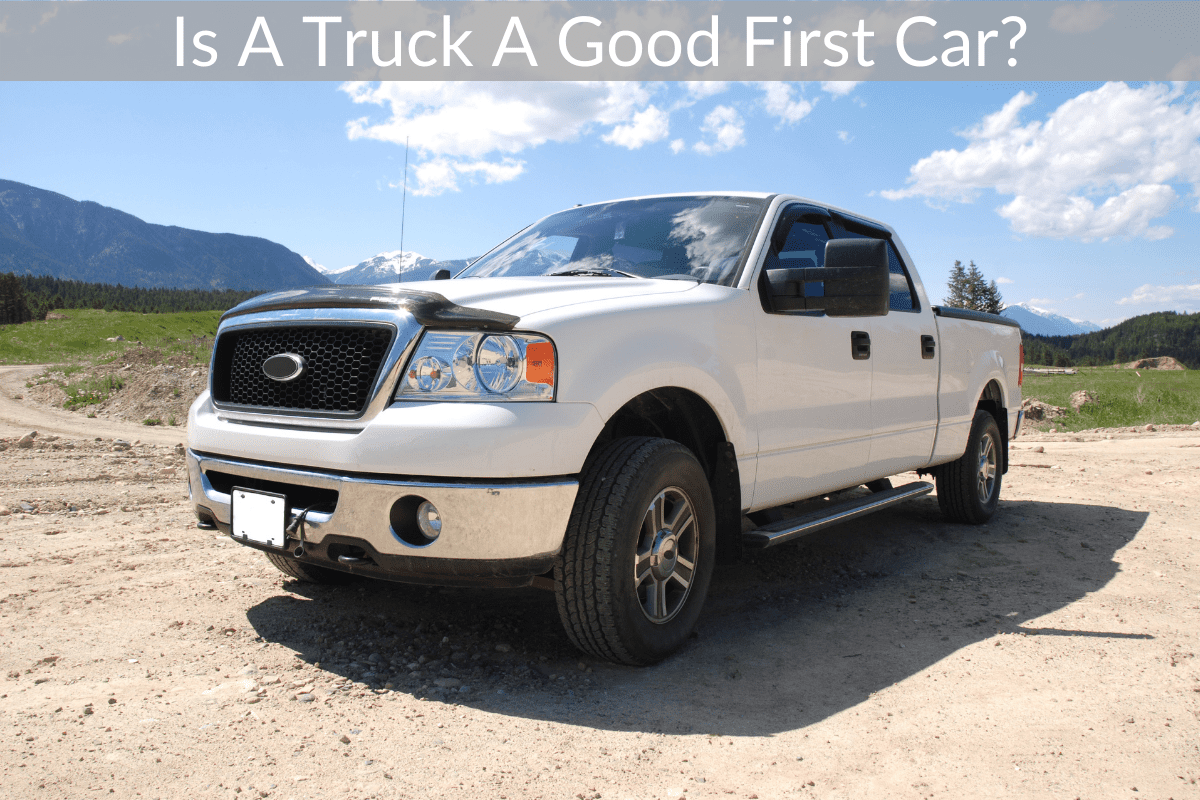 If you are looking to get your first car or buy a first car for someone you might be trying to decide which type of vehicle would be best for a first car. Of course there are many different vehicle types on the market but is a truck a good option for a first vehicle?

A truck is a great choice for a first car as it is useful for a variety of different purposes and is also a very safe vehicle type. One downside to getting a truck as a first vehicle is that the new driver might be more likely to hit curbs, cars, etc. because of the truck’s larger size.

The issue with the larger size of a truck only applies if it is a full size truck though and there are many smaller or midsize trucks that would work great as a first car without having that as a downside.

Learning how to drive (or getting more experience) on a larger vehicle will mean that the new driver will be comfortable driving both small and large vehicles going forward which is a nice plus. If someone learns on a small vehicle they might be uncomfortable driving a larger truck which limits them as they get older.

Of course no car is a perfect choice for a first vehicle and a truck is no different. There are of course some downsides to choosing a truck as a first car.

One of the major issues with using a truck as a first car is the fact that they are typically rear wheel drive which means spinning out on dirt/gravel/snow/ice is far more likely for an inexperienced driver. This means that the new driver could accidentally spin out and damage the truck or other vehicles nearby or even injure themselves.

Trucks being able to spin out could also be done on purpose to do doughnuts in a parking lot as well which is not something that an inexperienced driver (and likely no drivers) should be attempting to do.

So, although trucks are a good option for a first car they are not without some downsides. The most important thing when getting a first vehicle is to properly train the new driver about safely using the vehicle and not taking unnecessary risks to try and show off to their friends!

Are Trucks Good For Teenage Drivers?

When discussing vehicles for a teenager that is just learning how to drive it is important to consider the pros and cons of each type of vehicle. Of course all vehicles have their pros and cons to them in regards to letting a teenager drive the vehicle but trucks have more pros than cons in my opinion.

Trucks are a great choice for teenagers as they are an extremely safe vehicle since they sit up higher so in the event of a crash the driver and passengers are less likely to get injured. They are also a good choice because not as many people can fit inside of a truck (assuming it isn’t a double cab).

Not being able to fit as many people in the truck seems like it would be a major negative and for most truck buyers it would be, however, when it comes to teen drivers the less people in the vehicle the better. This is because teens that are distracted or trying to show off to their friends are far more likely to be in an accident than those who aren’t distracted or trying to show off.

With a normal truck cab a teenage driver will only be able to take two passengers with them which means only two people in the vehicle to show off to or to be distracted by. If the teen is driving a normal car they could easily have four passengers which means twice as many distractions and twice as many opportunities to try and show off.

As mentioned in the previous section not everything about trucks is perfect for new or teenage drivers as being rear wheel drive means they could easily spin it out on dirt/gravel or even snow/ice.

Of course that holds true for larger cars or SUVs that are rear wheel drive as well so that isn’t a con just for trucks.

I personally feel like a truck with a normal cab is a great option for a teenager to drive as they will learn on a larger vehicle and will be more comfortable driving all types of vehicles rather than someone who learns on a compact car and doesn’t want to drive anything larger than that.

Is It Harder To Drive A Truck Than A Car?

When buying a first vehicle for a teenager (or anyone really) it is important to consider whether driving that truck will be more difficult for that new driver or if the difficulty is about the same.

Driving a smaller vehicle is easier than driving a large truck as a smaller car will have smaller blind spots, will be easier to park, and is easier to handle. That doesn’t mean that driving a pickup truck is hard but it certainly is easier to drive a car.

Although it is harder to drive a truck than a smaller car I still like using a truck as a first vehicle as the teenager learning how to drive will have experience with a large vehicle and will then feel comfortable behind the wheel of any car while a teen that learns on a small car will be extremely uncomfortable driving anything that is larger.

A good example of this principle is someone who has driven a large vehicle such as a semi, school bus, etc.

I learned how to drive a school bus when I was 21 years old and drove it daily for about 5 years for my regular job. Although I no longer drive a school bus (and don’t even hold a CDL anymore) I am 100% comfortable getting behind the wheel of a large vehicle and driving it.

When I recently moved we rented a 26’ U-Haul truck which I easily drove, backed up into driveways, etc. Since I had driven a much larger bus for multiple years then driving a 26’ moving truck was no big deal to me. However, if my wife had to drive that large of a vehicle she would have been completely scared to do so as the largest vehicle that she has ever driven is a minivan.

Getting teens or other new drivers used to driving on a larger pickup truck will make them far more comfortable behind the wheel of any smaller vehicle so despite driving a small car being easier than driving a truck I still like trucks as a first car for people learning to drive.

link to Are Toyotas Cheap Or Expensive To Repair/Fix?

A lot has changed with the new Toyota models offered nowadays, including their class of vehicles. Many Toyota customers have had to go back to the drawing board and reevaluate their perspectives...