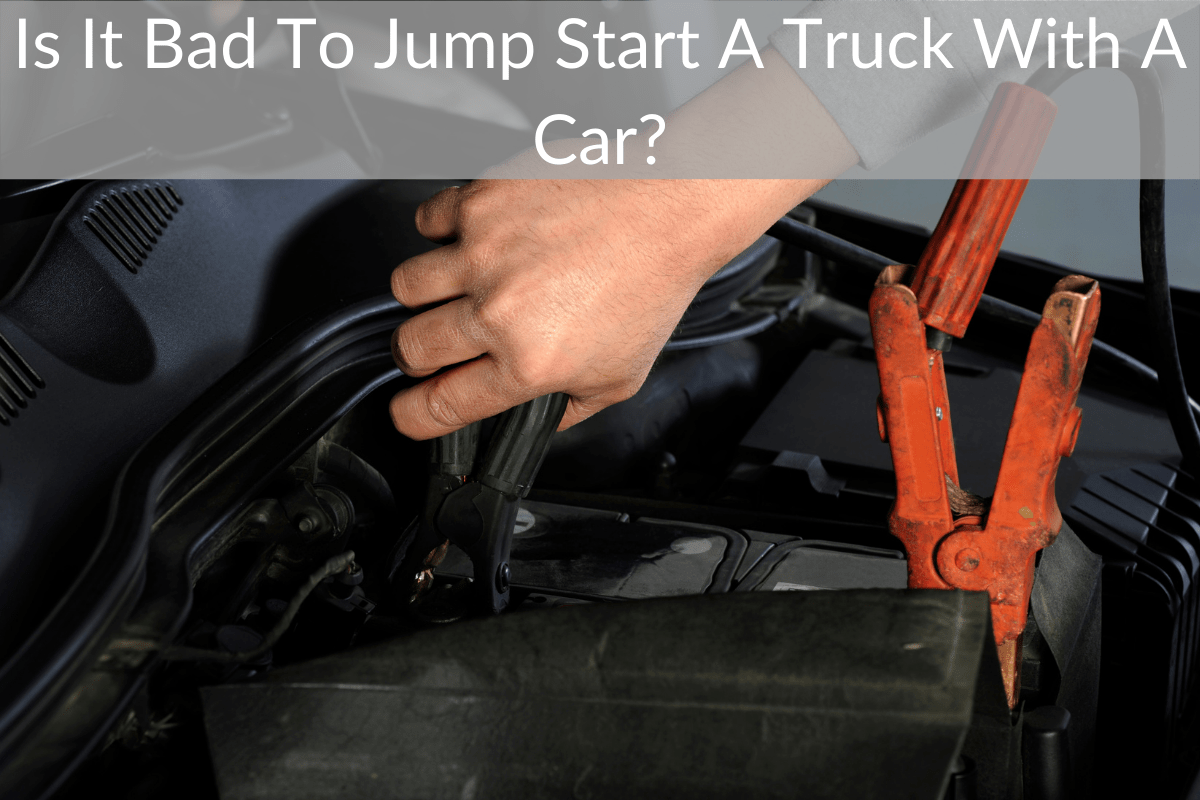 If you have a truck that needs to be jump started and you only have a smaller car available to do so you might be wondering if that is ok or if jump starting such a large vehicle with a smaller one will damage the smaller car (or battery) or not.

The truth is that jump starting a truck with a car is 100% safe as long as you correctly connect the jumper cables. It will not damage the smaller car at all nor will it hurt the larger truck to be jumped by the smaller vehicle.

You will have to rev up the engine of the smaller car but that is typical with the “donor” car anyway.

Anytime you are jumping a vehicle you will have to be careful and connect the jumper cables properly but as long as you do that then there is nothing wrong with using a smaller car to jumpstart a truck.

If you need to jump start a semi truck (obviously much larger) you can still do it with a normal car! You will have to rev up the engine of the “donor” vehicle typically for a couple of minutes to partially recharge the semi’s battery before you attempt to start it, however it still won’t harm your car’s electronics or battery even to jump such a large vehicle.

You SHOULD NOT connect the cable to the negative terminal on the dead battery in case of any battery leakage that you can’t see which is why connecting it to a part of the frame on the dead car is the proper way to attach the jumper cables.

Once the jumper cables are properly connected to your car/truck you will want to rev up the engine on the donor car slightly and let it “charge” up the dead battery (this is only required if the battery is entirely dead and not just weak).

Once the donor car has been connected for a minute or two you should be able to start up the car/truck that had the dead battery without any difficulty.

If the “dead” car turns over but doesn’t have enough power to start then leaving the jumper cables attached for a couple of extra minutes before retrying is a good choice.

If you want to jump start your car (or a friend’s) without the hassle of needing another vehicle, there are tons of great tools that hold a charge and allow you to jump start a vehicle easily.

You can find some of the most popular accessories for jumping a car without needing another vehicle by clicking here.

Can Jump Starting Another Car Damage Your Electronics?

If you are giving a jump from your car or getting a jump to your car you might be wondering if you are at risk for damaging the electronics on either vehicle.

One of the most common ways of jump starting a car is by using another running car. The second vehicle is used to provide power to the dead battery from the “donor” vehicle (as mentioned above).

As is the case with a car jump starting a truck, you will not damage either vehicle’s batteries or electronics by jump starting a dead vehicle. Neither the “donor” vehicle nor the vehicle with the dead battery will get damaged by using jumper cables as long as you connect them correctly.

Although jump starting a dead vehicle will not fix the reason that the battery died in the first place it will not harm either vehicle to jump start it.

Can Jump Starting A Car Damage The Alternator?

Whether you are getting a jump for your car or giving one with it you obviously don’t want to end up with a damaged alternator but will jumping your vehicle (or giving a jump) damage the alternator?

Jumping another car or getting a jump WILL NOT harm the alternator on either vehicle. This is a common misconception because often the alternator being weak or going out is what will have caused the battery to die in the first place that required the jump.

Can Jumping A Car Kill Your Battery?

As is the case with the electronics and alternator, jumping your car (or giving a jump will not hurt the battery on either vehicle at all. However, if the battery is already bad it also won’t resurrect it so you should find out what caused the dead battery in the first place.

Of course that is assuming that the battery is the issue and you didn’t simply leave the headlights or interior lights on or that you don’t have a problem with your alternator (where it isn’t charging your battery as it should).

Can You Jump Start A Car That Has Been Sitting For A Long Time?

If you have a car or truck that has been sitting for quite a while it is pretty likely that the battery has drained on it and you will not be able to start it however, whether you are able to jump it and get it going or not really depends on the battery and how long the vehicle has been sitting.

If your vehicle has been sitting for somewhere in between that time frame then its likely that jumping it will still work however you will have to leave the jumper cables connected longer and rev the “donor” car’s engine for a few minutes to charge up the dead battery enough to where the car will turn over again.

Another option is to simply buy a battery charger that you can connect to the dead battery and charge it up rather than jumping it but either way should work for you just fine.

Is It Okay To Start Your Car And Pump The Gas If The Battery Is Dead?

When starting a car for the first time after the battery has drained or died you will often need to flutter the gas pedal a little bit (give it some gas) to help get the engine started but is that okay to do or should you not do that?

Giving the dead car a little gas while trying to start it while it is being jumped is totally fine as long as you don’t give it too much gas and rev the engine too much or flood the motor out. A small fluttering of the gas pedal will not hurt anything while you are jumping your car.

However, if your battery is not charged enough to turn over yet then pushing on the gas is unlikely to help. It would be better to leave the jumper cables connected for a bit longer and charge up the dead battery a little bit more before you try to start the car.

Dangers Of Jump Starting A Car

A car’s battery provides energy to the starter motor which in turn causes the engine to start. If you jumpstart a car, it will draw its power from the donor vehicle rather than from the dead battery (for obvious reasons).

In order for jumper cables to work, there must be a good connection between the positive (+) posts of both batteries. Jumpstarting is most effective when you have a good surface contact between the two batteries. That’s why it’s very important that you never let your jumper cable clamps touch each other when making a connection. If your car has been sitting for some time, the electrolyte level in its cells could fall below acceptable levels. The acid could spill onto the vehicle’s frame, which may cause severe corrosion over time and could also be dangerous to you when jumping the vehicle.

You should also only use jumper cables from reputable manufacturers. Make sure that they are designed for automotive use with heavy-duty clamps. I also wouldn’t recommend getting a generic set from a discount store as a good set of jumper cables will last you much longer and be safer as well.

If you are using a set of old jumper cables that you got from the home improvement store, make sure they are dedicated to jumpstarting only because they are likely to be damaged or even melt if you use them for anything else.

Never touch the clamps of both sides of the jumper cables together while connecting the cables.

How Long Does A Jump Take To Start A Car?

If you are wanting to jump start your car you might want to know how long you can expect it to take. While many jump starts can happen instantly, if the battery is completely dead it can take a little bit longer.

In general you can expect a jump start to take no more than a few minutes in most cases. If the battery is completely dead then you will want to keep the donor car running for a few minutes to charge it up before attempting to start it.

Even if the battery is entirely dead you should still be able to jump the vehicle in just a few short minutes so if it is taking longer than that then you likely hooked up the cables wrong or there is something else wrong with the car that is causing the battery to not get the power to the starter properly.