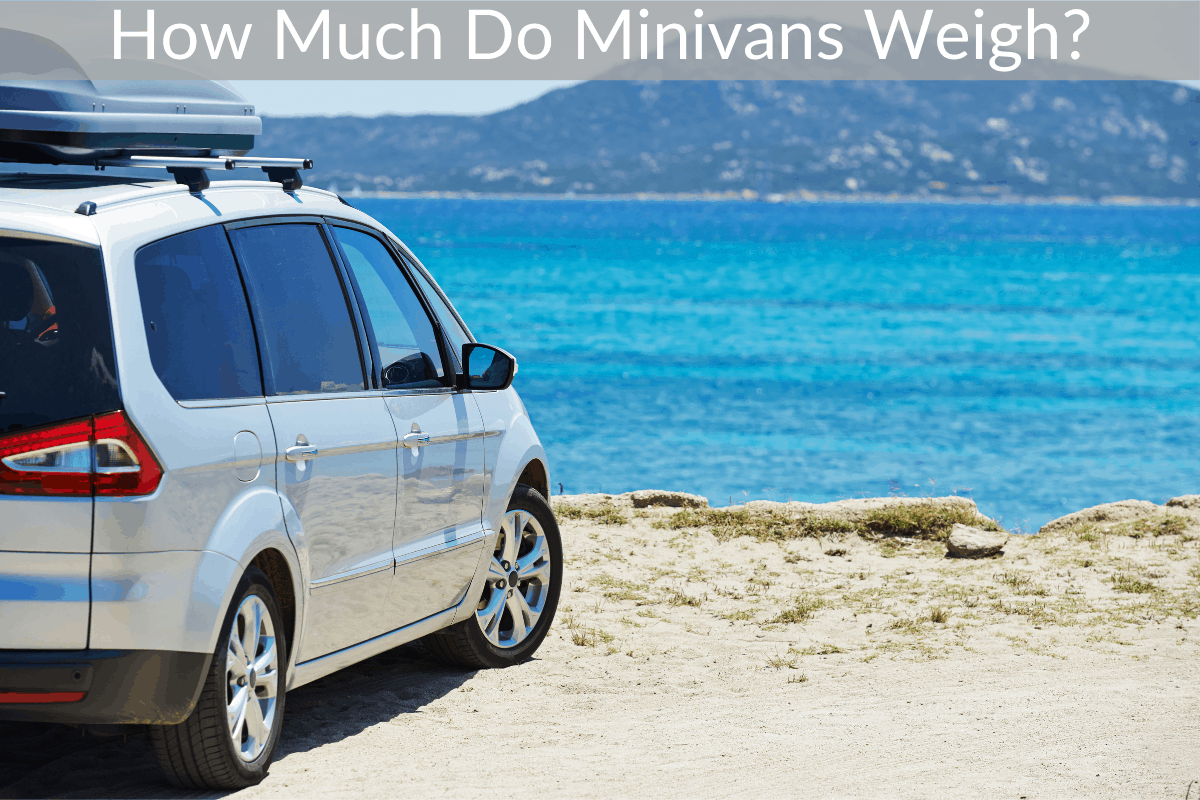 Minivans are vehicles that are super popular with anyone who has a large family or enjoys going on road trips with friends. With tons of space for passengers and luggage a minivan is an ideal vehicle for many people.

However, there is a lot of things that people don’t know about minivans and one thing that is commonly asked is how much they actually weigh. In this article I will answer that question as well as give you some important information about how the weight of a minivan affects it.

The weight of minivan’s will vary a bit but the curb weight of specific models are:

Averaged out over the current models the average weight of the minivans currently on the market is 4,496 pounds.

It is important to note that this is the curb weight of these minivans which means what they will weigh without any passengers or cargo but including all of the required things to make the vehicle run including fuel. Any passengers or luggage in a vehicle will add to the above listed weight amounts.

Are minivans harder to drive since they are heavy?

Many people think that since minivans are larger and heavier vehicles they will be harder to drive than smaller cars but in most cases this isn’t true. Sure a minivan can’t accelerate or brake as hard as a small light car but they are still easy to handle and also easy to drive.

In many smaller cars there are a lot of blind spots that can make driving them safely more difficult while in minivans, the large windows where the sliding doors are at make it easy to see around you. Most modern minivans will also have blind spot warning systems as well as back up cameras that make minivans even easier to use.

Minivans are quite efficient and convenient for the entire family. By this, I mean that individuals of all age groups can easily get in and out of a minivan which makes it a great choice for a wide variety of different ages.

A minivan is a great vehicle for children as well as older people in the family.

A minivan is low enough and close enough to the ground that young children can easily climb up inside and older people won’t have to struggle much climbing in either. Even people with problems with their legs could easily get into a minivan.

This large capacity of the vehicle, however, does not make it difficult to drive in any way at all. It may look quite heavy from the outside, but it should not be an issue to drive or ride inside of a minivan.

How many tons does a minivan weigh?

The weight of a minivan can vary so for an exact weight of your model not including passengers or cargo then be sure and double check the list above.

Of course that is just an average so if you are looking for the exact number of tons that your minivan weighs then you will simply take the curb weight mentioned above and divide by 2,000 (how many pounds are in a ton) to give you the exact weight in tons of your vehicle.

How much does a minivan’s engine weigh?

I’ve already mentioned the different weights of different minivan models and how that equates to how many tons a minivan weighs however, the specifics of how much each part of a minivan weighs is entirely different. If you are looking to pull an engine out of a minivan then you will need to make sure that the equipment you are using can carry enough weight.

But how much weight does a minivan’s engine actually weigh?

Typically a minivan’s engine will weigh very close to 350lbs. This can vary based on the size of the engine as well as what accessories you consider as part of the engine.

The engine’s weight will also vary from manufacturer to manufacturer since each one will make their engine slightly different and might even use some lighter or heavier materials for the various engine parts and accessories.

It would be very unlikely to see any minivan’s engine weighing in at much over 350-400lbs in modern minivans but the older ones might be slightly heavier (since they didn’t care as much about cutting weight and increasing gas mileage back then).

How much does a typical car weigh?

The weight of a typical car can vary a lot depending on whether you are looking at a compact or full size car. A compact car will normally weigh around 3,000lbs while a full size car will weigh closer to 4,000 pounds according to AutoShopAccessories. That is nearly 30% less than what a minivan weighs when compared to a compact car while being about 10% lighter for a full size car.

Normally the lighter the vehicle the faster it will be able to go all things being equal. However, normally a lighter car will have a much smaller engine which means that compact cars typically aren’t as powerful as the larger models are.

Minivans are heavier than virtually all cars on the market and they will also typically have more powerful engines as well. However, these powerful engines are designed to pull and carry more weight which means that you won’t see increased acceleration or power in minivans.

Normal cars will almost always have more “get up and go” than a minivan will.

Does the large size of the vehicle make it hard to sell?

If you are thinking that whether or not you are ready for a commitment such as buying a car and that too a big one like a minivan, then we will ask you to stop right there. You do not need to worry about your thoughts on that matter. There is still plenty of demand for minivans if you know where to go to sell it (assuming you aren’t wanting to sell it yourself).

You can easily sell your minivan on an online site where people go to look for used vehicles such as Craigslist, Facebook Marketplace, and more.

Another option you could try is to sell it to a used car dealership however, they will typically give you much less than you could sell it for on the open market. If your minivan is extremely old you could even sell it to a junkyard as they will often give you some decent money provided the parts are in good condition.

Many people may be under the wrong impression that a minivan may not be so easy to get rid of because of its huge size, but if you know where to sell it at, you can surely not just get rid of the car when you want but also get some decent money from it.

Are there any advantages to having a heavier vehicle?

Lighter cars will normally have a higher chance of facing road accidents. They will often be easy to total or damage much completely and hence the driver would have to be more cautious while driving a lightweight car. Lightweight cars also do not have a very tough build which means if you are in an accident a larger vehicle such as a minivan will often be safer.

Minivans on the other hand due to their tougher built and bigger size have these positives going for them. They will also not have the constant fear of getting turned over when hit by another vehicle as the weight on a minivan is in the center.

All of these things surely make a minivan a much-preferred choice over lightweight cars. The tires of a minivan also help in keeping a good balance. The bigger tires do not allow the car to lose balance easily and hence reduces the risk of accidents to a large extent.

All in all, if you were initially confused about whether or not to buy a minivan, you can surely now arrive at a decision. They are practical and great for short trips to the countryside and can even be easily sold off when they get old or simply not needed anymore.

If you were curious about how much they weigh, hopefully now you have the answer to your questions that you don’t have before you rest this article!