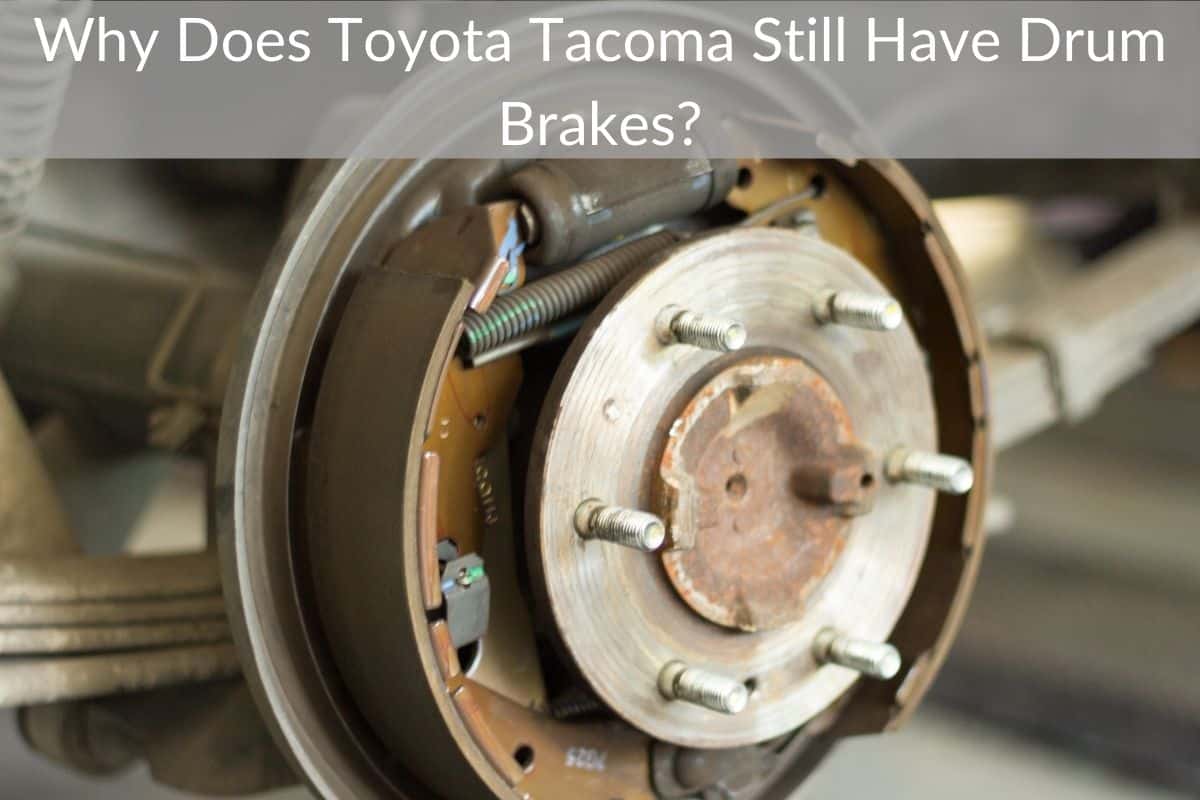 These days most cars are using disc brakes. However, there are a few vehicles that are bucking this trend, like the Toyota Tacoma.

So, why are these cars still using drum brakes?

Tacomas still have drum brakes because it allows Toyota to keep the manufacturing costs low. They can pass these savings onto the consumer.

Drum brakes will also last longer than disc brakes, so you will need to service them less frequently. Drum brakes are also better for off-roading, ensuring that the brakes won’t be affected by dirt on your Tacoma.

The Toyota Tacoma is a reasonably popular truck, which is still relying on drum brakes. Keep reading to learn more about why this might be a good choice and how it can benefit the people who purchase the vehicle.

Differences Between Drum And Disc Brakes

The first thing that I need to address is the difference between drum and disc brakes. A drum brake works by pressing shoes against the inside of a pad, located inside the drum. This generates friction, which slows the vehicle down.

On the other hand, disc brakes will rotate with the wheel. Calipers are on both sides of the disc. When you want to slow down, the calipers are applied to the wheel.

This stops the disc from rotating, stopping the vehicle from moving. Disc brakes offer more stopping power than drum brakes, which is one of the reasons why they have become the more popular option.

There are a few things that the Toyota brand is known for. Part of this is marketing themselves as an affordable brand. The Tacoma base model only costs $26,150.

When considering how reliable these cars are and how well they hold their value, this is a good price.

To help them do this, they have automated the manufacturing process.

However, the most important element is trying to save money on the parts that they are using. Drum brakes are cheaper to make and install than disc brakes.

They can pass these cost savings onto the customer. This gives them a price advantage in a highly competitive industry.

Another reason why Toyota opted to install drum brakes over disc brakes is because of how long they last between services. Because drum brakes last longer, the Tacoma will be cheaper for you to keep running.

As a general rule:

Parking Brakes Are Easy To Install

Drum brakes make keeping your Tacoma safely parked easier. You can make sure that constant pressure will be applied to the brake shoes, holding the Tacoma in place.

Installing this mechanism on a car that has disc brakes on all four tires is more difficult. Often, it will mean installing a form of disc brake. This adds to the manufacturing cost.

Drum Brakes Are Better For Off-Roading

The Toyota Tacoma has been designed to be suitable for off-road use. This means that they need to think about whether something will get stuck in the disc brakes.

Debris like rocks or sticks can get between the calipers. This might not present a major problem for disc brakes. Though it will make an unpleasant squealing noise, any debris should make its way out fairly quickly.

But it’s far less likely that debris will make its way inside the drum so they are better for off road vehicles.

How Does Having Drum Brakes Affect The Performance Of The Toyota Tacoma?

Many people are nervous and might think that using drum brakes will impact the performance of their Toyota Tacoma. They want to know that they will be able to stop the car fast enough in an emergency.

However, driver feedback indicates that this isn’t a problem. Only the rear wheels of the Tacoma use drum brakes. The front of the car relies on disc brakes.

Most of the braking power comes from the front wheels. Because of this, it should drive, and brake, like a normal vehicle.

Furthermore, because the front wheels will be doing most of the braking, the rear brakes will last for a long time. As a result, it will often be closer to 200,000 miles before you need to replace them.

This will end up saving you a long of money in the long term.

Having drum brakes on the Toyota Tacoma makes a lot of sense. However, that doesn’t mean that they are the perfect solution.

Here are some of the downsides of having drum brakes:

The good news is that the way the Tacoma has been designed helps to avoid most of these problems. The front wheels will be used most extensively.

This means that the drum brakes shouldn’t get too hot.

Disc brakes have become the most popular option and are found in most modern cars. But drum brakes are still found in a range of common vehicles.

The best example of this is the Toyota Tacoma.

There are several reasons why Toyota might want to incorporate this into their trucks. It allows them to lower manufacturing costs, is better for off-roading, and will last for a long time.

When viewed in this light, using the traditional drum brake system makes more sense and changing to disc brakes.