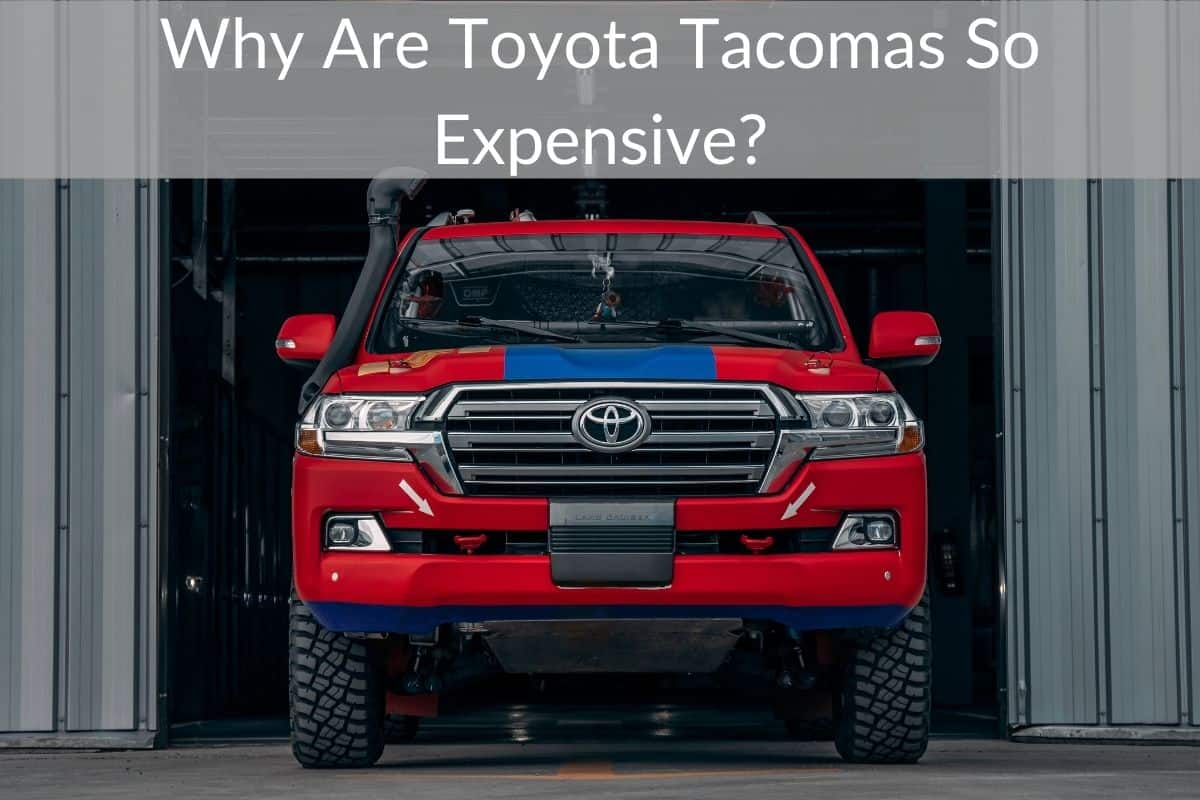 If you have been in the market for a truck you are likely to have considered the Tacoma. With its better fuel mileage than the Tundra and its smaller size it’s a great choice for many people.

But when you looked at the price tag you might have taken a big gulp because the Tacoma doesn’t come cheap. Why is the Tacoma so expensive?

The main reasons why Toyota Tacomas are so expensive and popular is that they are seemingly indestructible and last for a long time. Since Toyota makes such reliable vehicles they charge a premium for many of them,

The Tacoma’s price is purely determined by Toyota’s marketing strategy, which focuses on car aficionados who enjoy off-roading. They also have a bit of a luxurious touch in their look and interior, enabling them to hold their value better than any other truck on the road.

The Tacoma is one of the world’s most popular pickup trucks, and it is no wonder that they are so expensive.

Since the Toyota Tacoma is known for its extreme reliability and ability to hold its value, its price has constantly risen, especially on the used market.

All Toyota vehicles hold their value decently well even when they are used so that is another reason why they are expensive.

To see the most popular truck gadgets and accessories just click here.

6 Reasons Why The Tacoma Is Expensive

If you are considering buying a Toyota Tacoma but are not sure if the price is right for you, here are a few factors that make the Toyota Tacoma so worthy of being an expensive mid-size truck.

The Toyota Tacoma is an off-road monster that has an incredible towing capability. It can pull up to 6800lbs and has a max payload of 1,685 pounds.

Thanks to its high-performance V6 engine with auto transmission it can handle a considerable amount of weight.

For a mid size pickup truck, this is a pretty good average figure and justifies its higher price.

Are you planning a long awaited weekend getaway? This strong truck is your answer! Toyota’s reputation for manufacturing heavy-duty cars/trucks with high performance adds to its allure, allowing it to dominate the market effortlessly.

The Toyota Tacoma has consistently stayed at the top of sales because of its reliability scores of 77 out of 100. There are three levels of scoring: exceptional (90-100), acceptable (80-90), and ordinary (70-80). Below 70, the results are regarded as fair and below average.

These scores explain that the Toyota Tacoma has pretty reliable scores and is predicted to have excellent performance.

All cars lose value over time, but Toyotas are unique in how well they retain their value for a long period. Being a reliable truck helps the Tacoma hold its value well.

But just because Toyotas are the most popular does not mean they are always reliable. In spite of its good overall rankings, the Toyota Tacoma had a reputation for being unreliable for a few model years.

Some 2016 and 2017 models were reported to have transmission problems. Today, however, you can rely on it fully.

It is not just used for off-roading. Rather, the Toyota Tacoma is also a reliable work truck that can be used as a nice family car as well. Even if you buy a secondhand Tacoma, you will be getting a reliable truck for a very long time.

All in all, this above-average reliability also comes with a premium price.

You can count on a long life from this truck, far longer than you might think. The average automotive lifespan is up to 200,000 miles, but well-maintained Toyota Tacomas can run well over 300,000 miles.

Several Toyota Tacomas have even surpassed the 400,000-mile mark. Who wouldn’t agree to pay a little extra for that?

Despite the couple years of reliability concerns (mentioned above), the Toyota Tacoma has remained one of the most popular compact trucks out there. Many individuals are interested in both the new and used versions of this truck which shows how well the Tacoma carries itself for years that people are happy to buy the used one as well.

Toyota’s Tacoma truck dominates the market, evidenced by the number of ’90s Tacomas still on the road today. Older Toyota Tacoma’s can still be found in the wild daily, which speaks of Tacoma’s legacy itself.

I believe that what makes it unique is its ability to last far longer than its competitors. Even a fresh new Tacoma today may last until your kids get their driver’s license in 15-20 years if you take good care of it.

People who own Tacomas have no reason not to adore them or question their worth. In addition to its amazing off-road performance qualities, TRD-models are also equipped with excellent towing capabilities.

Going with a TRD Off-road or TRD Pro trim is recommended if you plan on driving in rough terrain because the modified suspension and shock absorbers, a locking rear differential, and skid plates make the journey much easier.

The Toyota Tacoma is your ultimate solution for those in search of rugged, well-equipped trucks that can handle rough terrain. However, improving its engine power would be a plus and make this truck more thrilling and comfy.

The SR and SR5 variants use a four-cylinder gasoline engine that delivers 159 horsepower. It is expected that the 3.5-liter V6 engine with 278 horsepower will be undoubtedly robust and powerful, and we don’t see why it shouldn’t be! It has more power than the 2.5L engine and accelerates faster, playing a major role in elevating its price

The Toyota Tacoma comes with both manual and automatic six-speed gearboxes. Both the lower models have a V6 engine, whereas higher models have a standard V8 engine in all of them. Toyota claims that the standard engine of Tacoma achieves up to 20 mpg in town and 23 mpg on the interstate.

These values are really close to the average for compact pickup vehicles. For example, even cars with a V6 engine will be achieving up to 19 miles per gallon in the city and 24 miles per gallon on the highway.

The Tacoma’s interior cabin is outstanding in general. The cabin is loaded with tough plastics, yet the interior boasts of relatively high quality. And such prime quality comes at a premium price.

For the Tacoma, you can get a variety of different bed lengths. It is unnecessary to need a bed liner since both truck beds feature composite material inner walls.

An adjustable tie-down system is also built into the bed railing. It comes with some storage areas available in the cabin, including a concealed compartment under the rear seats.

If you are looking to purchase a cost-effective and worthwhile car, you should definitely get the Tacoma. It is a cost-effective car starting at $26,150 to $44,075, depending on the trim level. Of course you can used Tacomas cheaper than this.

The Tacoma is designed for your unforgettable off-road expeditions. The journey gets even better when its smooth and quick steering system is accompanied by modern and efficient entertainment and safety features, contributing to its value and making it a relatively expensive truck.

If you’re still asking, why are Toyota Tacomas so expensive? You better take a test ride, and all your questions will be answered!

For the foreseeable future, Tacoma will continue to win hearts!