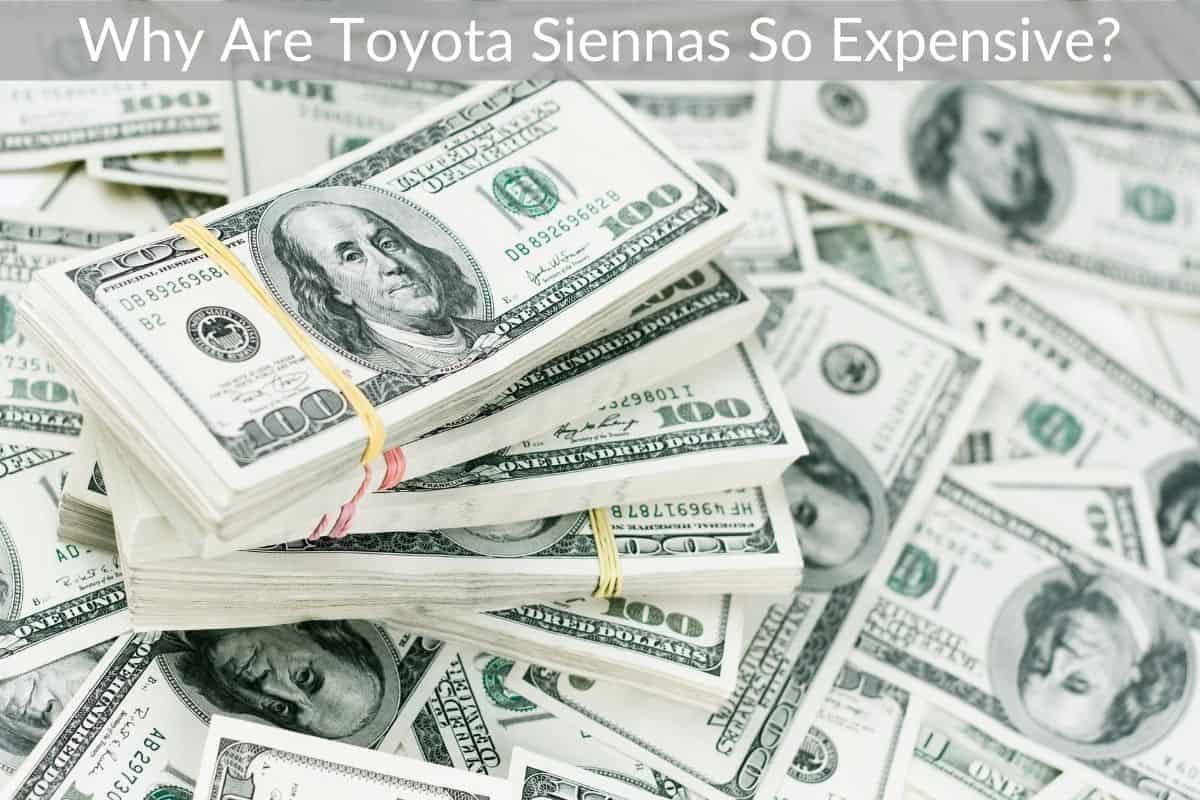 Toyota Siennas are well known for being reliable and sturdy minivans. They come with multiple different classes that involve higher-grade technological features and simpler trims with user-friendly features for those not so obsessed with hi-tech electronics.

If you have been looking at a used or new Sienna you have likely seen that it is priced considerably higher than other similar minivans on the market. But why is that?

Like many Toyota vehicles, the Toyota Sienna range is an expensive vehicle because of the overall quality of the product and its longevity. The Toyota Sienna is one of the best and most top-rated minivans on the market today and it is expensive because it is so popular.

As well as being known to last for 300,000 miles and more in its lifespan, this long-lasting vehicle can comfortably sit 7 and even up to 8 passengers in some of its models. The Sienna is a minivan designed for long-lasting comfort and there are numerous reasons why it’s such an expensive vehicle.

Another reason why the newest Siennas are more expensive is that they only offer a hybrid version. So while some minivan manufacturers offer gas or hybrid options Toyota now only offers the Sienna as a hybrid.

That also will push up the starting price for these vehicles.

Why Is The Toyota Sienna So Expensive?

Toyota Sienna’s are expensive because they are genuinely an overall great vehicle and the research and development that goes into the designing and manufacturing of Toyota vehicles are extensive and expensive.

Some of the safety features include:

Along with numerous other safety advantages, the Sienna also comes with impressive features in technology including enhanced vehicle stability control.

Here are a few other features I love about Toyota Sienna vehicles:

According to cars.usnews.com, minivans generally start around the$40,000 mark for a good quality and reliable model. The latest range of the Sienna line starts just under$40,000 so it’s pretty on par with the average.

It’s likely the four Sienna models that start above the $40,000 mark that have people wondering why it’s so expensive.

Here are the latest prices on the 2022 Toyota Sienna models:

So, no one can deny that the 2022 Sienna is expensive, but is it worth it?

Are Toyota Sienna’s Worth Their Price?

Toyota is an award-winning vehicle manufacturer that has produced some of the best engines and vehicles in the world since 1937.

To put the award-winning into perspective, I searched through some of the top vehicle-related websites on the internet for the best vehicle manufacturers in the world, and out of the 10 we looked up, Toyota is rated in the top 5 in every source.

Speaking of awards, the 2021 Toyota Sienna range has two trophies under its belt for Top Safety Pick at The Insurance Institute for Highway Safety (IIHS) and the 2021 Best Buy Award from Kelly Blue Book.

The performance, style, and superior handling of the Sienna is only part of the reason why their prices are worth it.

According to Sienna chat forums, like siennachat.com, some Sienna owners have driven their minivan for decades and racked up over 300,000 miles on the odometer. As far as minivans go, that’s pretty impressive.

The advanced safety features, the simple to luxury designs, the spacious interior all add to why the Toyota Sienna is worth paying for.

If the latest 2022 models are above your price range, it’s well worth looking into earlier models too as the Sienna has been rated highly for years and many of its safety features and benefits have been implemented since at least 2018.

Another thing to mention is that the newest Siennas are a hybrid, and this is highly advantageous for its fuel efficiency, miles per gallon, and its smaller carbon footprint effects on the environment.

Are Toyota Sienna’s Expensive To Maintain?

According to repairpal.com, the average annual maintenance and repairs cost for a minivan is approximately $647 while the average cost in servicing and repairs for a Toyota Sienna is almost $100 less than that at $554.

Unfortunately, all vehicles come with only a few year warranty which means eventually, they will start to wear and break down over time.

One of the best things about the Sienna is its ability to be driven for years and hundreds of thousands of miles without ever needing to see a mechanic.

Some common maintenance issues in the recent Sienna’s are:

Some of these are common problems found in many other vehicles and due to the extensive knowledge on how to repair these issues, they’re not too costly to have fixed by your local mechanic – unless of course, you’re still under warranty then it can be sorted out by your local dealer for no charge.

Toyota Siennas are considerably cheaper to maintain than other vehicles on the road and on the market today.

The Toyota Sienna range might seem expensive at first glance, but when you delve into the reasons why these vehicles are priced the way they are it’s easy to see they’re worth it.

Toyota manufactures exceptional quality vehicles and is known for being cautious about implementing new ideas until they have solid evidence that the innovation will work.

The Toyota Sienna is a well-known vehicle model and has a good history for being a reliable car. Sienna’s are robust, long-lasting, and durable vehicles and the latest price range doesn’t surprise us at all.