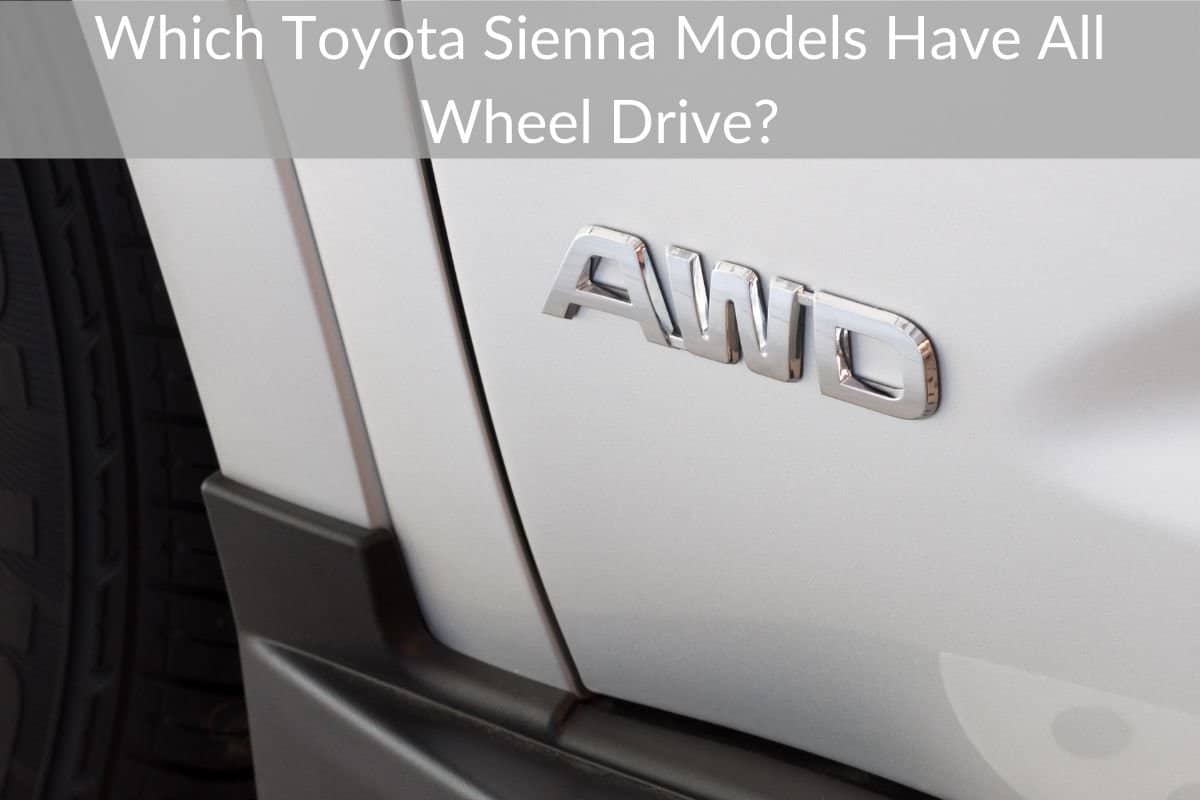 All-wheel drive (AWD) was first introduced around 1972 by Subaru. Since then, car owners have increasingly become more aware of the benefits of AWD and are paying the extra costs to have their car be a AWD model over the front-wheel drive (FWD) models where appropriate.

Toyota is one of the bigger vehicle manufacturers that have incorporated AWD into many or most of their vehicles.

If you are wanting to buy a Sienna and want to get one that is all wheel drive it’s important to know which models have that as an option.

There is no specific Sienna model or trim that has AWD. It can be added to any trim level for an additional cost. No Siennas prior to 2004 will have AWD on them.

Toyota first integrated all-wheel drive (AWD) in 2004 with its second-generation Sienna trims. Front-wheel drive (FWD) is the standard option offered on all Toyota Sienna models but AWD is offered as an additional feature for families who wish to select and pay the extra cost.

While not everyone is a fan of AWD due to its slightly extra cost in fuel, others are fans of AWD for its numerous benefits, specifically the ability of this family minivan to be able to handle snow, ice, and more on family adventures.

Keep reading below to find out more about the AWD option related to the Toyota Sienna and which Sienna’s offer AWD.

All-wheel drive is available on every 2021 Toyota Sienna trim for an additional price of up to $2,000. The latest release of the Sienna comes standard with FWD (Front-wheel-drive) for all five trim levels but can be purchased as AWD in all five 2021 trims, LE, XLE, XSE, Limited, and Platinum models.

Until the introduction of the 2021 Chrysler Pacifica, since 2006 the Toyota Sienna family minivan was the only minivan available with AWD.

Why has this made the Sienna a favorite family vehicle for so many years running? Because all-wheel drive offers numerous advantages for the minivan fanatic.

Here are the reasons why I love AWD:

Having better traction is an advantage for vehicles when driving through harsher road conditions like snow, standing water, ice, black ice, and loose gravel. The traction of all four wheels working together produces a better grip on the road surface and allows the driver to have better control of the car.

This feature makes AWD a great option for those who occasionally like to drive off the driven path and venture off the beaten path for a fun family adventure.

Vehicle handling is improved through the weight of the minivan but also the benefit of generating power to two sets of tires provides an additional safety precaution with reducing the braking distance in a sudden stop scenario which prevents an accidental collision.

Which Sienna’s Have All-Wheel-Drive (AWD)?

While AWD was introduced to the Sienna range in 2004, not all Sienna models over the years have come equipped with the option to have an AWD package.

AWD is a popular option for families in colder weather climates who might often face driving conditions in wet, and snow-like environments, where the power of two sets of wheels is stronger and grips better than one set.

If you’re in the market for a new minivan and like the Toyota Sienna because of its multiple family benefits but aren’t sure if it comes with AWD, we’ve got you covered.

Here are the makes and models of Toyota Sienna’s that offer the advantage of all-wheel drive:

AWD was available on the LE and XLE models.

The 2005 Sienna made AWD available in all-new trims across the Sienna range, CE, LE, XLE, and XLE Limited with the 3.3-liter V6 engine.

2006 still had four Sienna trims but did not continue to offer AWD across all-new models. The LE, XLE, and the XLE Limited all had three styles that can be bought, one of which comes with the AWD option, is the 5-door, hosts a V6 engine, and 215 horsepower.

2012 continued on the new changes made in 2011 and also offered AWD in all Siennas.

Front-wheel drive was standard as usual along with a V6 engine, but Sienna now offered AWD only for higher Sienna models LE, XLE, and Limited trims.

2015 and 2016 saw minimal changes yet again in the Sienna range but through all-new models, including LE, LTD, Limited Premium, XLE, and XLE premium, AWD can be offered.

The L and SE trims did not offer the additional AWD package.

Le, XLE, and Limited all came with AWD in the 2018 Toyota Sienna range and Toyota had also included 8-speed automatic transmission in its 2018 range to up its game against competitors that did not have it yet. Toyota at this stage was still the only minivan hybrid on the market.

Still available in L, LE, SE, XLE, and Limited, now the L trim is the only Sienna in 2019 that did not come with the AWD opt-in package.

Usually, the Sports Edition (SE) did not come with the option to upgrade to AWD but 2019 brought on a new standard for Toyota and incorporated AWD with the SE models, a 3.5-liter V6 engine, 8-speed auto transmission, 296 horsepower, and 7 comfortable seats.

As mentioned earlier, the 2021 Toyota Sienna is now up against another hybrid minivan with AWD capabilities, but its competitor only offers AWD on its gasoline models.

Toyota has continued its positive streak of AWD in hybrid minivans and offers AWD packages in the LE, XLE, XSE, Limited, and Premium trims.

How To Tell If Your Sienna Has AWD

To check if your Toyota Sienna has an AWD function you can either note down the Vehicle Identification Number (VIN), usually found on the inside of the driver’s door, and call your local dealership to check their database for records, or you can look under your car!

What you’re looking for is if the axle shaft runs directly from the front to the rear axles. If this is the case, you’re driving an AWD Sienna.

The Toyota Sienna is highly rated for its safety features and having AWD as an additional option goes a long way in safety ratings too. Less than ideal road conditions make AWD a popular option for larger and smaller families alike in America, especially in colder climates where snow is bound to fall in winter.

Consider purchasing a Sienna that comes equipped with or can be offered in AWD so that you can take your family vehicle (and the family!) on spontaneous off-road trips and feel confident knowing your AWD vehicle will get you to your destination safely.