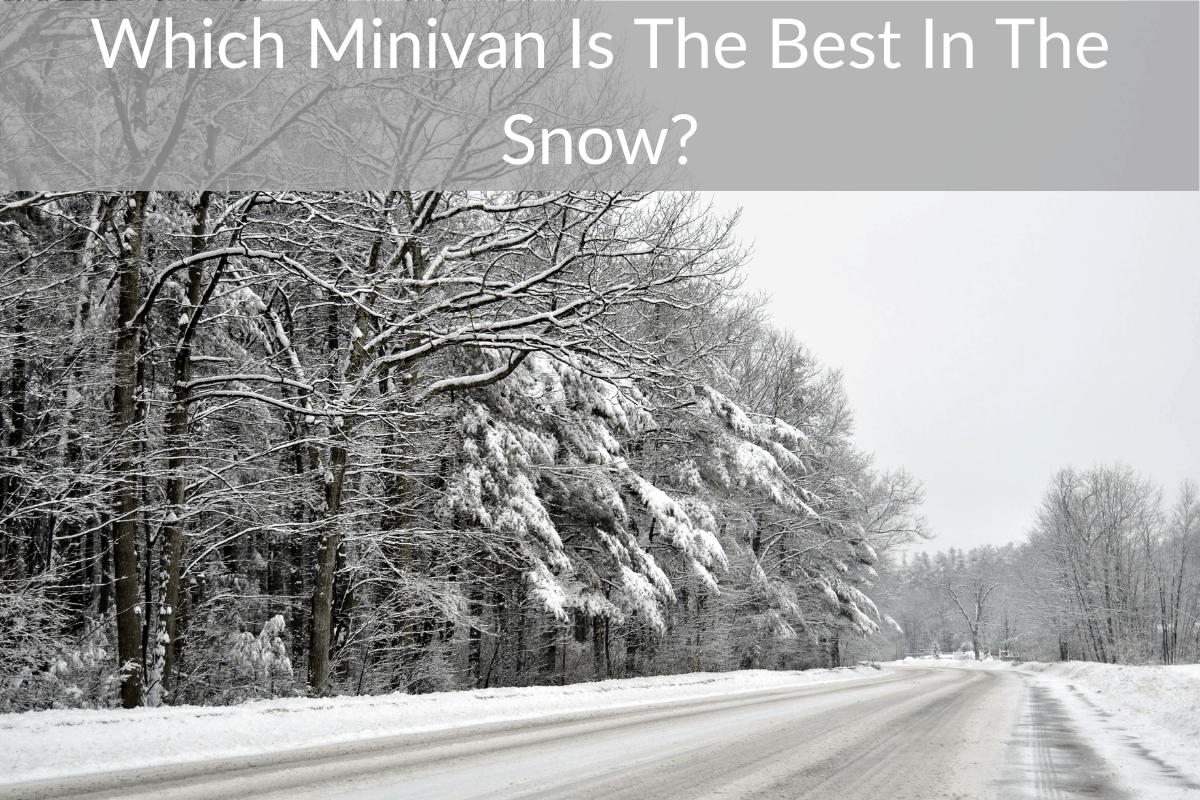 It is a well-known fact that driving in snow can be tricky no matter which vehicle you are in. Even if you are a good driver, you need to be able to control the car and prevent it from slipping on the snow and sliding into someone or something.

Have you ever woken up to see that every inch of the whole street is covered in snow? If you live in a city where it gets exceptionally bad during the winter then you must have wondered which minivan you should buy to handle the conditions the best.

When you have a family with children, a minivan seems to be the ideal choice because of the versatile seating and space for loading heavy cargo, but which minivan can also handle the snow the best?

If you drive in the snow a lot you will want to get an AWD minivan which means you can choose from a Chrysler Pacifica and Toyota Sienna since both of those have all wheel drive. Of these two models the Pacifica offers better internal room (because of Stow & Go) while the Sienna has better overall reliability.

It’s certainly possible that other minivans will have AWD in the future but currently those are the only two models that offer it.

Even without all wheel drive minivans can typically get around pretty good in snow since the other models are front wheel drive but if you will be driving through some pretty deep snow having all wheel drive is pretty important.

There are some other minivan features that are quite important if you will be spending a lot of time in the snow. Some of those are:

What is the difference between AWD and 4-WD?

As mentioned earlier, the Toyota Sienna and Chrysler Pacifica come with all-wheel-drive, a.k.a. AWD. In fact, those are the only minivans among their competitors that have AWD.

No other companies seem to be in a hurry to launch their minivans with the same feature.

Other minivans only come with front wheel drive (FWD) which is fine in most cases but not ideal for driving in the snow.

Some people will use all-wheel and 4-wheel interchangeably but there is actually a pretty big difference between the two.

The all-wheel-drive system sends power to the two axles, rear and front, as needed. If the tire in front needs more power then the system will cut power to the other axel and give more power to the one that needs it. This is all automatic and is not controlled by the driver.

The system is a little different in a 4-wheel drive vehicle.

With a 4WD system each tire functions independently of the other so if one tire is slipping the other three can make up for it. Typically 4WD can be turned off and on manually by the driver where AWD is normally always on.

Is AWD better in the snow?

The four-wheel-drive system is cheaper to manufacture than the AWD but an all-wheel drive system is probably the best in snow. AWD sends power to those axles that need traction and since it is always on you never have to decide whether you need the traction or not.

The AWD system is great for driving on snow. When you start your car, the traction will be transferred as needed, and the car will start moving smoothly. Other cars might not be so smooth and start slipping especially if they are rear wheel drive (RWD).

The AWD system is especially helpful with sloppy and slippery surfaces. If one set of wheels starts slipping then more traction is sent to the other set to find good grip there and power through. The all-wheel-drive system sends torque to all four wheels. This will help you to accelerate faster, obviously, due to better gripping, but it will also help in making turns because of the increased grip in all four wheels, not just two.

When a minivan with an all-wheel-drive system starts driving uphill then most of the traction is transferred to the front wheels to provide more grip. Although the AWD may come with less cargo space, it is still worth it if you live in places that deal with snow/ice.

Along with the all-wheel-drive system, the tires themselves play a considerable role while driving in snow. The tires need to be of good quality with excellent traction to avoid slipping and skidding in snow.

Do you need snow tires on your minivan?

People are always in the dilemma of whether they should install snow tires or not. They think that snow tires are not necessary when they already have an all-wheel-drive system, but that is not always true.

In addition to having an all-wheel-drive system, it is also beneficial to have snow tires on your minivan. This is especially true in cities that face intense snowstorms and blizzards and that get snow layers that are multiple inches thick.

It does not harm anyone to take extra safety measures.

In Canada, most of the people on the road will be using snow tires in winters and have seen a considerable amount of change. They can drive better and are more confident when driving in the snow. There are also fewer accidents in winters and the tires do not slip as much while turning.

Snow tires have more grip in addition to that provided by the all-wheel-drive system. They have better traction and are specially designed to work in cold and slippery conditions.

Snow tires are perfect for younger people who lack experience and would be nervous to drive in the snow for the first time. A little boost in confidence is all they need and an extra safety measure will do just the trick.

link to Toyota Rav4 Towing Capacity: What Is It?

Having a car that can drive plenty of miles without needing to refuel is a huge advantage. Having a compact and comfortable SUV That easily takes you from A-Z in most driving conditions is also a...

Continue Reading
link to Toyota Rav4 In Snow: Is It A Good Choice?

It’s that time of year again when the frosty snow starts to fall and you either love it or you hate it. What makes the snow easier to tackle is a good snowball fight, plenty of marshmallow-filled...