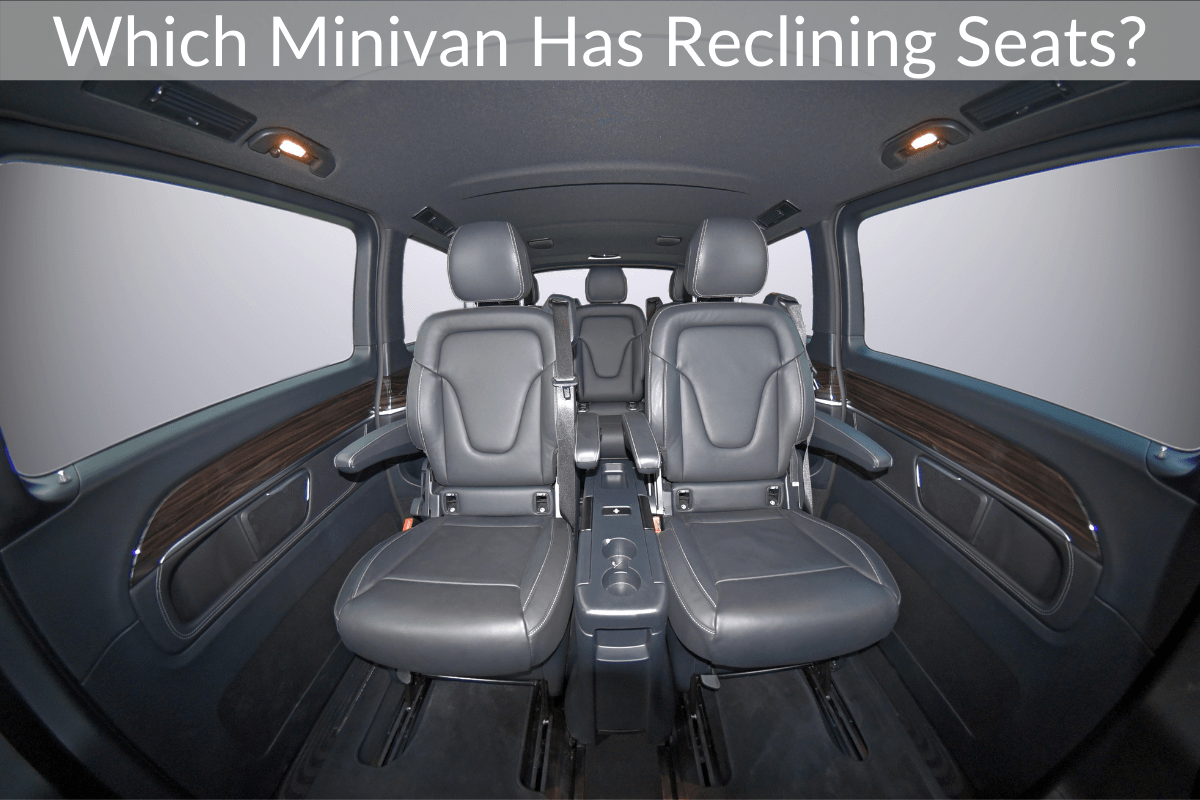 For families that are looking for a comfortable weekend trip with kids, minivans are almost always the best choice. Above all, lots of storage space is an amazing advantage that families can expect from minivans.

When looking for a new minivan how comfortable the seats are as well as the storage options are often both major things that people look for so in this article we will specifically look at which minivans offer reclining seats.

Not every one of the models of these vehicles have reclining seats however as the cheapest models will often have seats that don’t move at all. So despite all of these minivans offering reclining seats you will still want to check and make sure that the specific model that you are looking at offers this before purchasing a vehicle.

Reclining seats are typically offered on almost all minivans nowadays and often even the back row seats will recline in most models as well! The extra comfort that minivans give all of their passengers as well as the extra storage and even hauling space is one of the things that make minivans still popular today despite them being considered “uncool”.

Not that we have covered which minivans have reclining seats, let’s look a little bit deeper at the seats that these minivans have and how many they have.

What minivans have the most seats?

If you have a bunch of people that you need to take on your next vacation or simply take around town then you will certainly want one that will fit as many passengers as possible.

But which minivan will fit the most people in it?

There are 4 minivan models that can all fit 8 passengers in them. Those models are:

As with the reclining seats, mentioned above, there are a variety of models with some holding 7 passengers and others holding 8 so if you need an 8 passenger minivan then you will want to double check and make sure that the ones you are looking at can actually fit  8 passengers.

If you need to fit more people than that there are also additional vehicles that can fit 10-15 passengers in them but they aren’t really considered to be minivans and are normally just called passenger vans.

Which minivan has the most comfortable seats?

Each minivan has a variety of different models so the more expensive ones will always have seats that are more comfortable.

If you are looking for a minivan where the seats are the most comfortable on every model then you will want to check out the Honda Odyssey and the Toyota Sienna. Both of these vehicles have the best seats no matter which model you choose.

However, how comfortable a seat feels is quite subjective so the best way to know which seats you prefer is to actually sit in them for a day or two. If you are looking at getting a brand new minivan then you can rent a specific model for a day or two and see what you think about the comfort level of the seats.

If you are buying a used model this is a little more difficult but you can use a car rental service like Turo to rent models that are a couple of years old as well.

Which minivans have fold down seats?

If you are getting a minivan to not only haul around large groups of people but to haul around a lot of stuff then you will want to get one that has the option to fold the seats into the floor.

But which models have this?

If you are planning on using a minivan for hauling a lot of suitcases, cargo, or virtually anything else (I’ve used my minivan for moving before) then you will likely want one that allows all of the rear seats to fold into the floor so you will want to look for a Dodge or Chrysler.

Being able to fold all of the seats down into the floor allows your minivan to fit A TON of stuff in it and in many cases you can haul more in the back of a minivan than in a pickup truck (in size not weight)!

Not all Dodge or Chrysler models have the stow and go (folding into the floor) on them but the majority do. If the second row seat is a bench seat and not captains chairs then it won’t fold into the floor.

Do Toyota Sienna seats fold into the floor?

If you are wanting to get a Sienna but you also want to fold down the seats for extra storage then you will likely want to know whether the Sienna allows you to fold the seats into the floor or not.

With the third row folded into the floor of the Sienna you will have approximately a 4 foot by 4 foot space to put things. If you slide the second row seats forward you can get a couple of extra feet as well.

If that isn’t enough storage space for you or if you don’t want to have to mess with manually removing and replacing the second row seats then you will want to purchase a Dodge or Chrysler that has all of the seats that fold into the floor.

Can a Toyota Sienna Seat 8 people?

If you are more concerned about hauling people then stuff you will certainly want to know how many people can fit in a Sienna. Can it fit 8 people in it or only fit 7?

The Toyota Sienna models that are all wheel drive will only seat 7 people. The models that are not AWD will have a middle seat in the second row that will allow the vehicle to fit 8 people.

That middle seat in the second row is pretty small however so you likely wouldn’t want to put an adult in that seat unless it’s only for a short ride. It’s nice to be able to seat 8 people but only you can decide if not having the AWD is worth it where you typically drive at.

In this article we have covered a lot of common questions about minivan seats including whether they recline, which ones are the most comfortable, and whether they fold into the floor or not.

When you are looking for a minivan it is important to know exactly what you plan on using it for before deciding on which make and model to buy.

For example, I use my minivan for work a lot of the time so having the ability to fold both the second and third row into the floor to haul things is a must for me. If you don’t use your vehicle like that and only use it to haul people around then you will want to find a model that can fit more people!

Only you know what you will use it for and what features you can and can’t live without.