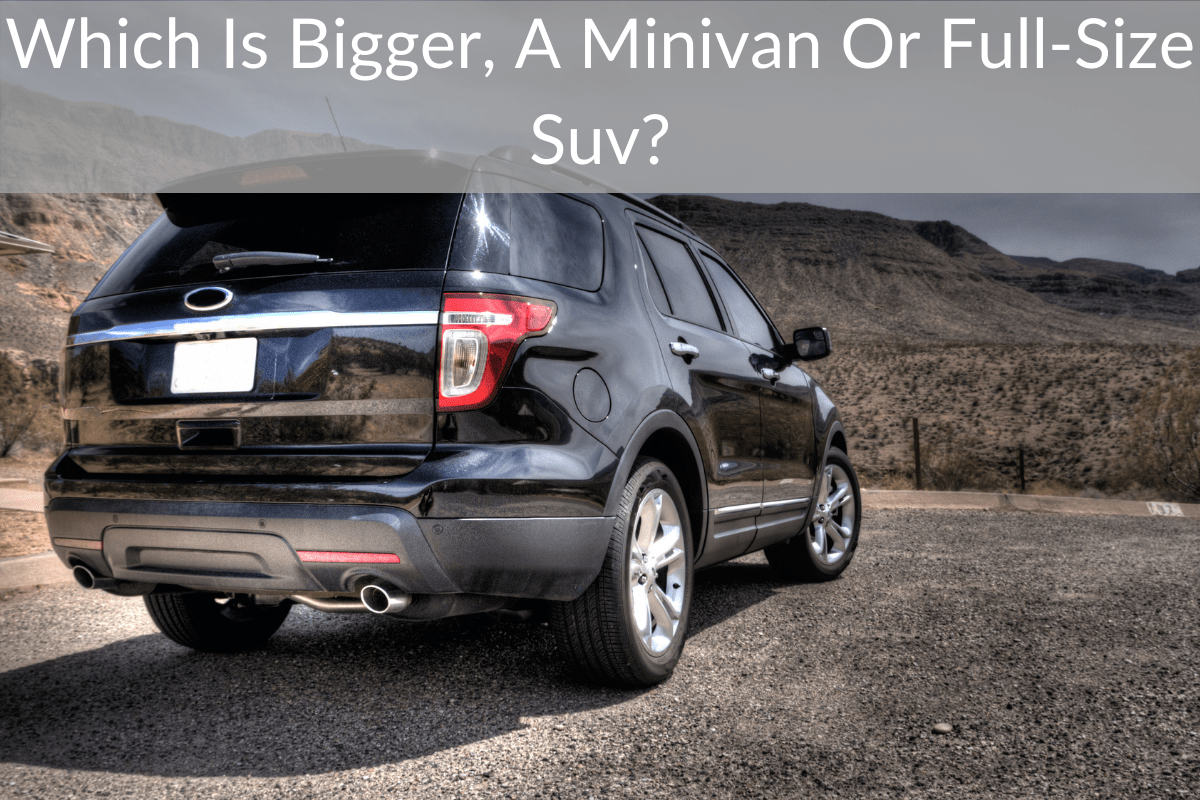 The need for automobiles keeps on changing over time. Selecting a suitable vehicle is a cumbersome process for many people as there are many different considerations when choosing any vehicle whether you are planning on renting or buying it.

Many people will narrow down their options to either a minivan or large SUV as these two types of vehicles are actually quite similar. One thing that you should know about these vehicles is how they compare in regards to size abd which one is actually bigger.

So, all of that to say that SUVs are absolutely bigger than minivans when it comes to dimensions on the outside, but what about the interior? Are minivans bigger on the inside?

Surprisingly, minivans are almost identical to large SUVs when it comes to cargo area. Most minivans have right around 140 cubic feet of space while the Chevy Suburban has 144 cubic feet and the Escalade only has 121 cubic feet!

Despite large SUVs being considerably heavier, longer, and taller that doesn’t give them an edge when it comes to hauling cargo as minivans win out in that department vs almost every large SUV on the market!

In the rest of this article i will cover some of the additional differences between a minivan and large SUV as well as give some information about bigger vehicles and why many people prefer them.

How do bigger vehicles help you?

Bigger automobiles are equipped with different features that help the user in the best possible ways. Following are some of them which are designed to help you while traveling around the block or across the country.

What are the perks of having a minivan?

Minivans are equipped with a large body and have massive interior space for 7-8 passengers plus luggage or even a massive amount of items. The seating arrangement also helps the user in getting the maximum out of this vehicle.

People tend to get a minivan when they find the need for having a spacious automobile that can cater to all their needs no matter if they are hauling people or furniture.

When it comes to commercial purposes, the bigger the minivan, the higher the cargo-carrying capacity will be. However, for bulk loads, the towing or cargo carrying capacity also depends upon the power generated. Bigger minivans are suitable for most of the work, which provides different kinds of benefits such as monetary and effortless transportation of goods.

What are the perks of a full-size SUV?

SUVs are considered as multifunctional vehicles with massive power. The included features in these kinds of automobiles help the user in the best possible ways. Those who are quite fans of speed and power with a heavily muscled body of automobiles can opt for a full-sized SUV.

The full-sized SUVs are spacious and equipped with all of the needed functionalities while still providing plenty of space. They also aren’t considered “soccer mom vans” which is appealing to many people who would never be caught driving a minivan.

What is the difference between a minivan and a full-size SUV?

When it comes to differentiating between minivans and a full-size SUV, the functionality matters a lot. If you are confused between these two, then it is important for you to define your needs. If you have numerous members in your family, then minivans are likely preferable for commuting.

Other than that, if you are indulged in business purposes such as transporting passengers or carrying cargo, then minivans are also  of great use.

Those who want to attain power and space in their vehicle can opt for a full-size SUV. This helps people to achieve power and comfort at the same time.

SUVs are comparatively less spacious inside than minivans, however, the power and other exclusive features compensate for that.

Both the segments are quite significant and fulfill all the needs of their owners. If you are looking for comfort, minivans are preferable, but if you want power and a nicer look, then a full-size SUV provides practical help.

What is safer, a minivan or SUV?

Another thing that is important to consider when you are looking at minivans or SUVs is the safety aspect. Of course both minivans and SUVs are incredibly safe vehicles as otherwise they wouldn’t be allowed on the road, but which one is safer?

Surprisingly, minivans are actually a safer vehicle than SUVs simply because they are less likely to turn over in an accident. Since SUVs sit further off the ground they are more likely to roll which could lead to more serious injuries.

That isn’t to say that an SUV isn’t safe, as both of these types of vehicles are larger which helps to make them safer however, when comparing the two, minivans are the safer vehicle.

Do minivans get better gas mileage than SUVs?

On top of the purchase price of a vehicle you also have the added expenses of insurance, maintenance, and of course fuel. If one vehicle gets considerably better gas mileage than another then over time it will save you a lot of money.

But, do minivans actually have better gas mileage?

Minivans have considerably better gas mileage than similarly sized SUVs. For example, the Chrysler Pacifica gets 19/28mpg while the Chevy Suburban gets 15/19mpg.

Of course if you are comparing a minivan with a smaller SUV such as the Toyota RAV4 then the RAV4 would win, however, that isn’t really a fair comparison as that is a much smaller SUV and can’t fit anywhere close to the same cargo or people inside of it that a minivan can.

When comparing apples to apples, a minivan gets better gas mileage than a similarly sized SUV.

I hope that this article has been helpful in answering your questions about minivans vs SUVs. In general, large SUVs are bigger and heavier than minivans but minivans can typically haul more cargo inside of them especially if you get a model where the seats fold into the floor!