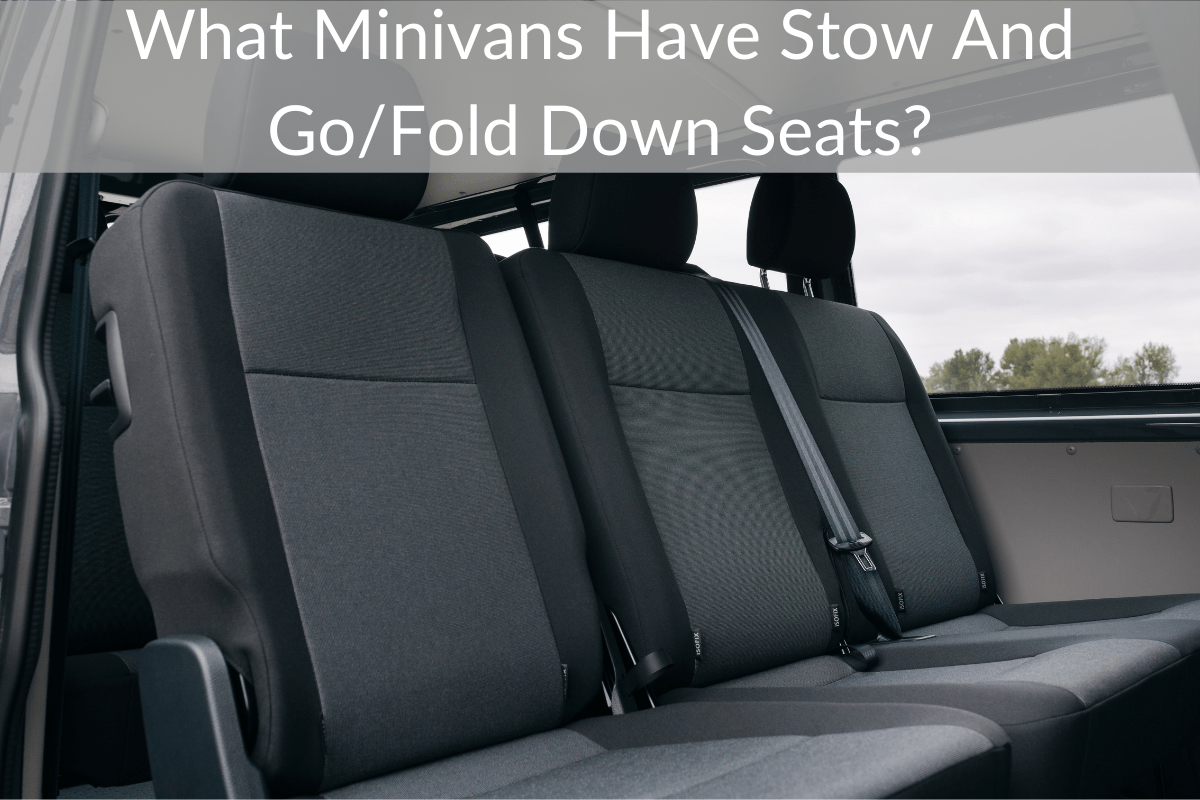 Minivans are really the best option when it comes to having a lot of space for your family and friends. Minivans are known for their flexibility, which makes it a perfect vehicle for everyday use as well.

One huge benefit of a minivan over other vehicles is how much luggage or other cargo you can fit inside. Filling your minivan with luggage, cargo, furniture, etc. has become even easier since the Stow and Go/ fold down seats came out.

But if you are looking to rent or buy a minivan you will definitely need to know which minivans offer Stow and Go or allow the seats to fold into the floor.

Currently the only minivans that offer Stow and Go seating are models made by Dodge and Chrysler. Other minivans have the third row fold into the floor but the second row of seats does not.

The reason that only Dodge and Chrysler minivans have all of the rear seats fold flat into the floor is because Dodge/Chrysler hold a utility patent on the Stow and Go design which means no other minivan manufacturers can have the second row fold into the floor!

The minivan manufacturers have tried to get around this by having their second row seats be wash to remove, fold forward into a standing position, etc. but they can’t have them fold flat.

This means that only Dodge or Chrysler minivans have the option for ALL of the rear seats to fold down into the floor (Stow and Go).

Minivans offer tons of height and room similar to an SUV with a sedan-like driving experience. Minivans will consist of three rows of seats, which can fit up to eight passengers; the fold flat feature of the minivan opens a world of hauling opportunities.

Since there are so many options available on the market, choosing a perfect minivan can be a difficult task but knowing which models have the fold flat seats makes it easier if that is something that is a must have for you.

The first minivan I ever purchased was a Chrysler Town and Country and the Stow and Go seating has been absolutely amazing in allowing me to use my minivan for virtually everything!

Because of the Stow and Go on the Chrysler minivans I have for a full dining room table and chairs set, a couch, across the country, and much more inside of it!

Honestly, I would never buy a minivan that didn’t offer the ability to fold all of the seats into the floor!

However, what is good for my family and our lifestyle might not be good for you so you have to determine if the Stow and Go seating is something that you have to have or if you won’t use it very often.

What exactly is Stow and Go?

Stow and Go seats is actually a term that was patented by Dodge/ Chrysler and these seats originally appeared in those minivans in 2005. Specifically the Stow and Go meaning is that you can fold the entire second and third rows of your minivan into the floor to make some extra space for cargo.

You can stow either or both of the rows beneath the floor; this helps in folding the seats without using any of the valuable cargo space. It lets you use the entire cargo area for virtually anything giving you a massive area to haul furniture, luggage, or even full sheets of plywood!

Also, when the seats are not stowed in the floor it lets you use the large storage compartment area in the floor in front of the second row of seats.

One huge downside to many people is that the full Stow and Go option is only available on Dodge/Chrysler models currently (although when the patent expires you can expect to see it on all minivans).

Many people would prefer to get a Honda or Toyota minivan because of their reliability but since they can’t offer Stow and Go for the second row of seats they will instead have to stay with a Dodge or Chrysler model.

However, the patent on the Stow and Go is set to expire in August of 2023 which means that at that time it is likely that all new minivans models will have all of the rear seats able to fold flat into the floor.

If you are wanting a new minivan with the Stow and Go option but prefer one made by Toyota, Honda, etc. then you will have to wait until after that time when they will likely start producing their models with that feature.

The earliest model year for the other minivan manufacturers to have the Stow and Go on them will likely either be their 2024 or 2025 models (depending on if they wait to manufacture the 2024 model years until the patent expires).

How does the Stow and Go/fold feature work in minivans?

To use the Stow and Go in a Dodge or Chrysler minivan all you have to do is give a slight tug on the stow and go tag or pull the handle (depending on the model), which is on the side or rear of the seat (depending on which row).

Then if it’s the second row seats you just fold the floor back on top of the seat and you are done!

What are the advantages of Stow and Go/folding seats?

Stow and Go seats/ seats that fold into the floor is the best and simplest way to maximize the space in your minivan. With the help of the large storage area beneath the floor, you can have more cargo space even when the seats are all up!

The major advantage of having Stow and Go seats is that you can change the seat configuration and how much cargo room there is almost instantly. No longer do you have to manually remove the seats and put them in your house or gather. All you have to do when you need to haul furniture or cargo is to fold the seats into the floor and you are ready to go!

Also, it is a great feature while you are travelling with your pets; they can sit through the journey without feeling any discomfort and it gives them the extra room to move around if they want to.

Currently the only minivans with Stow and Go seats is a Dodge or Chrysler minivan however, that will be changing in the next few years as the patent for Stow and Go expires in late 2023 which will likely mean all new minivans will have it as a feature after that year.

Stow and Go/ fold flat seats are an absolute must for anyone who ever moves a lot of furniture, luggage, or other cargo. Being able to have an entirely flat cargo area in just a few seconds is so much easier than removing the seats manually!