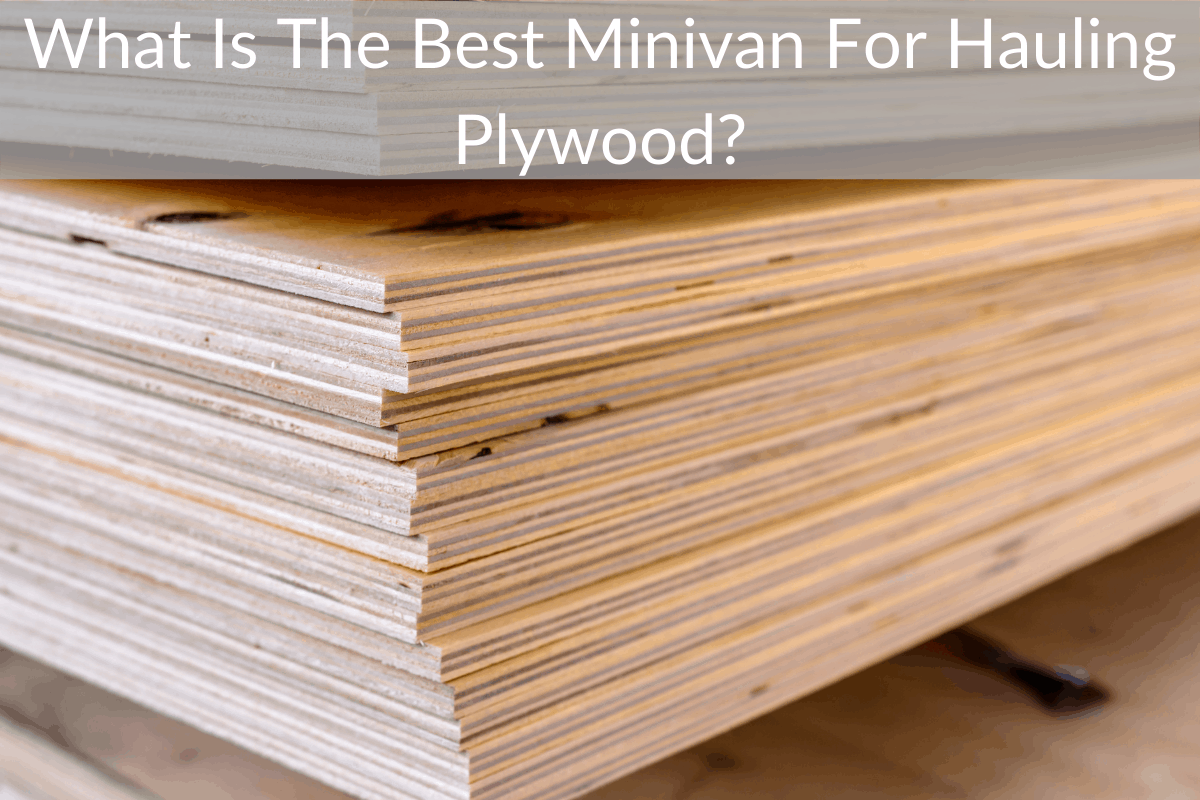 Minivans have been multi use vehicles for many years but in recent years with the advancements in technology that has allowed for seats that easily fold, slide, or move around they are becoming popular not just for people with families but also for those who love to do some DIY projects on the weekend.

To many people’s surprise you can actually haul around plywood in the back of a minivan in virtually all of the modern models that are available but which one is the best when you plan to haul a lot of plywood or other large items?

Both the Dodge Grand Caravan and Chrysler Pacifica/Voyager are the best minivans for hauling plywood. This is due to the fact that these models have the ability for all of the seats to fold into the floor which makes taking them from a family hauler to a plywood hauler happen in a matter of seconds.

All other minivans on the market require you to remove the second row seats which can be quite a hassle but since the Dodge and Chrysler minivans offer stow and go seating in their vehicles it makes hauling the plywood incredibly easy and it’s also super easy to swap back to hauling people again.

A Dodge or Chrysler minivan can haul approximately 1,500 pounds after taking into account the weight of the driver. That means that you can haul up to 30 sheets of plywood in the back of your minivan (if ½ inch thick and normal materials) or 22 sheets if it’s ¾ inch plywood.

That is a lot of plywood for any vehicle to haul but the fact that you can put that much plywood in the back of a minivan is what makes it a great choice for those people who love to do projects while still wanting a family vehicle.

What minivans can haul plywood in them?

Now that I have given the absolute best minivans for hauling plywood you might be wondering if the other minivan models on the market such as the Toyota Sienna, Honda Odyssey, or Kia Sedona can haul plywood as well.

The Toyota Sienna, Honda Odyssey, and Kia Sedona can all fit full 4×8 sheets of plywood inside of them but you will have to remove all of the seats from the vehicles to do so. Typically these models will have the third row fold into the floor but not the second row so you can fold down the third row but will have to manually remove the second one.

Although it is nice to be able to haul around plywood in any minivan, having to remove the seats from the vehicle and then put them back in when you are done is a deal breaker for many people. I currently have an older Chrysler Town and Country that allows for all of the seats to be folded into the floor and I use it quite often when purchasing appliances, furniture, and more. In the next year or two I will be looking to get a new minivan again for the family and as much as I like the reliability of the Sienna or Odyssey I will likely be choosing a Chrysler because it’s the only one that has the option for all of the seats to fold down flat.

When you are hauling plywood inside of your minivan there are a few important things that you should take into consideration. These are especially important if you will be hauling a lot of plywood in the back but are less important if you are only moving a couple of 4×8 sheets.

When you have a lot of excess weight in the back of your minivan it can make both accelerating and braking take considerably longer than what you are used to. That means you need to be extremely careful not to accidentally pull out in front of someone expecting to be able to accelerate at a normal rate.

You should also leave a much longer distance between yourself and any vehicle in front of you as quick braking is not likely to happen when hauling that much weight.

When you fill the back of your minivan up with plywood you can hinder your ability to see out the side or rear window if you aren’t careful. In most cases you won’t be stacking the plywood that high anyway but if you have plywood and then other materials on top of it you might not be able to even use your rearview mirror at all.

If this is the case then you will definitely want to be extra careful while driving and pay special attention when changing lanes or merging into traffic.

Another thing that is really important to think about is what will happen if the material shifts. If you have a bunch of items stacked up really high in the back of your vehicle and you have to brake really fast you will find that everything will go sliding towards the driver and windshield! If you aren’t aware of this when loading your minivan you might not be aware of it until it’s too late and something shatters your windshield or hits you in the head!

You should always make sure that everything in the rear of your minivan is below the front seats and also not where it can go flying between the two front seats. Never put 2x4s or other long lumber in the middle ON TOP of the plywood as then it will be tall enough that it could injure the driver or break something else.

The payload capacity of your minivan is based on when the minivan is entirely empty. So if your minivan has a payload of 1,700lbs and you have two people in the two front seats that each weigh 300lbs the weight of materials that you can carry in the back is only 1,100lbs and not the 1,700lbs that it’s rated for.

The payload capacity is the total weight that is inside the minivan so be sure and figure in the driver’s and passenger’s weight to be sure that you don’t overload your minivan and break the suspension or damage the motor.

In short, irrespective of the minivan you buy or already own, hauling plywood is possible however it is the easiest to do in either a Dodge or Chrysler minivan simply because of the Stow and Go seating option.

If you don’t want to go to the hassle of removing the seats from your minivan then you should either buy, rent, or borrow a Dodge or Chrysler model so you don’t have to deal with all of that hassle.