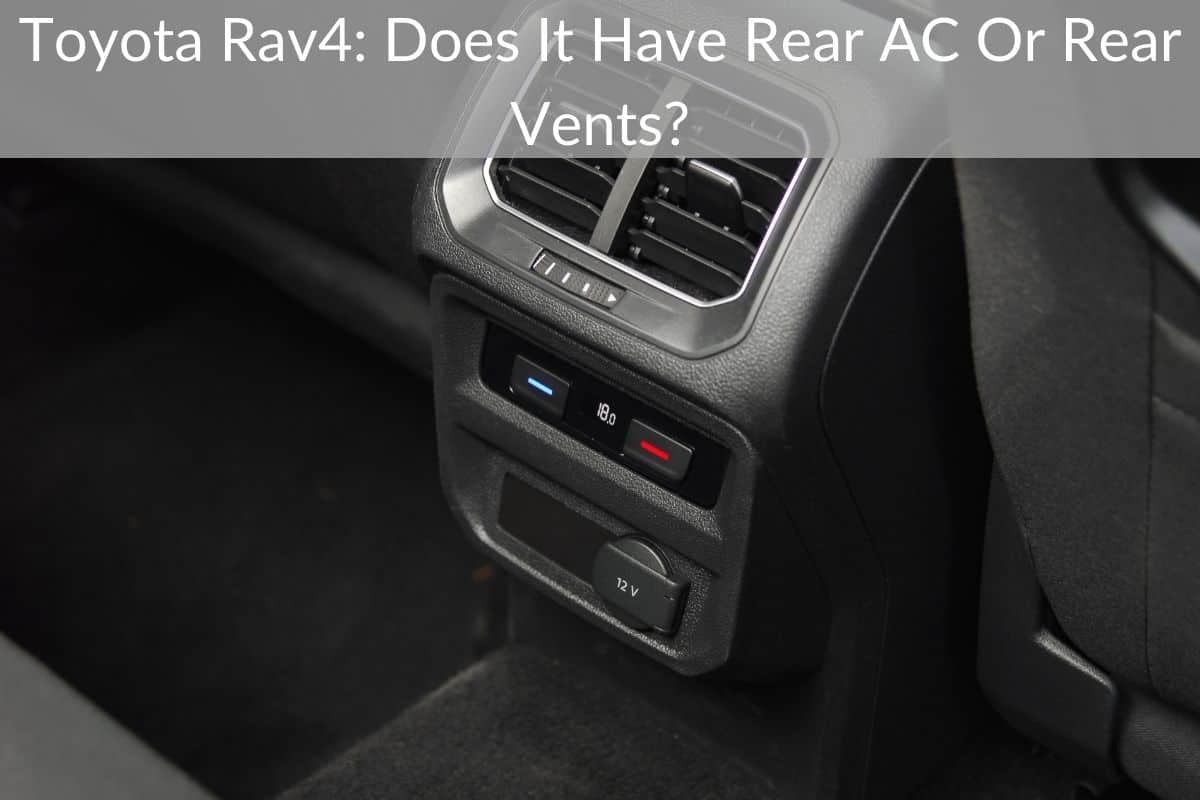 Airconditioning, what a luxury. Gone are the days where air conditioning in cars doesn’t exist and you have to rely on opening the windows to try and get some decent air filtration inside the car only to find the air is blowing too hot. Yes, we are firm lovers of air conditioning.

The Toyota Rav4 has rear air vents and air conditioning through a dual climate control system that was introduced to the Rav4 as a standard feature in some trims around 2007. The fifth-generation Rav4 has improved on many of its features and now offers new trim levels to suit a wider audience.

The once very little Rav4 SUV has been getting bigger every year and since its fifth-generation remodel in 2019 has boasted numerous features fit for a king. The technology, comfort, and design are superior to other compact SUVs on the market today and the Rav4 will yet again be on the leaderboard for best and most sold SUVs in 2021. Read on to find out more about the luxurious features of the Toyota Rav4 dual-climate control and rear air conditioning.

Does the Toyota Rav4 Have Rear Air Conditioning and Air Vents?

From the 20th century, the release of the third generation of the Toyota Rav4 introduced rear air conditioning and rear air vents so that both the front and rear passengers could bathe in optimal comfort.

All trim levels of the Toyota Rav4 offer climate control with standard air conditioning. The upper trim levels, however, also offer rear vents so that the passengers in the backseat can enjoy the set temperature too.

We’ll cover which Toyota Rav4 trims have this superior feature further below and will also cover some of Toyotas other car models that offer the dual-zone air conditioning system too.

Introducing the 2021 Toyota Rav4, for those who love a compact SUV with all-wheel drive capabilities, and a little extra interior comfort, this is the car for you.

Toyota’s latest dual-climate control with rear vents is now a standard feature on the upper trim levels of this favorite SUV.

The basic trim has a standard climate control system with the usual dust and pollen filter and does not offer any dual-climate upgrades.

Although the price of the Rav4 has gone up for the 2021 model release, with the basic starting price of the SE at US$38,100, Toyota has included numerous features that are worth the extra cost for this much-loved SUV.

Since the Rav4 came to the American car market in 1996 it has been one of the best-selling SUVs every year. The Rav4 has continued to impress year after year and owners give the Rav4 a solid reliability rating. They also give the Rav4 high marks in its interior features.

Here are the Rav4 trims that come with the dual-zone climate system with rear vents:

Toyota released three trim levels with over 30 available configurations. Only the LTD trims have the dual-climate zone option with rear vents.

2012 is the last year for the Rav4 V6 before Toyota went back to their fuel-efficient and economy four-cylinder engines.

Many of the 2012 trims don’t offer the dual-zone climate control but here are the ones that do:

All lower-level trims, the LE, come with standard air conditioning and do not come with the option to upgrade to dual-zone climate control.

The 2020 Rav4 is rated at number 5 on the list of most affordable compact SUVs according to Cars Us News. Considering the features included in this lovable car, number 5 might as well be number one.

How Does Dual-Zone Climate Control Work?

The automatic dual-zone climate control feature will have air vents in the front and the rear of the vehicle. These air vents work to control the temperature of the car for both the front and rear passenger’s comfort.

It is called a dual-zone climate system because both the front and rear passengers can choose their ideal desired temperature to suit their needs.

You can have the air vents blowing warm air through the front, and cooler air through the back at the same time! This can solve a lot of disagreements if the body temperatures of the passengers of the car don’t always agree.

You will know if your Rav4 has dual-zone climate control with the buttons on the dash of the car that indicate the temperature for both the front and rear vents.

Jeff understands it’s hard to choose the right model for you and your needs so is keen to show off the best-selling SUV in the country and its numerous advantageous features to help you make a decision.

If you live in a climate where the weather gets extraordinarily hot or cold, rear air conditioning and vents could really benefit you and your passengers.

The 21st century is all about comfort and Toyota has gone above and beyond with their compact Rav4 SUV by including dual-climate control which is usually an additional or standard feature only seen on more expensive and luxury vehicles.

If you’re a fan of the Rav4 and ultimate comfort, the upper trims from 2019 to the present are the Rav4 cars you want to be looking for!