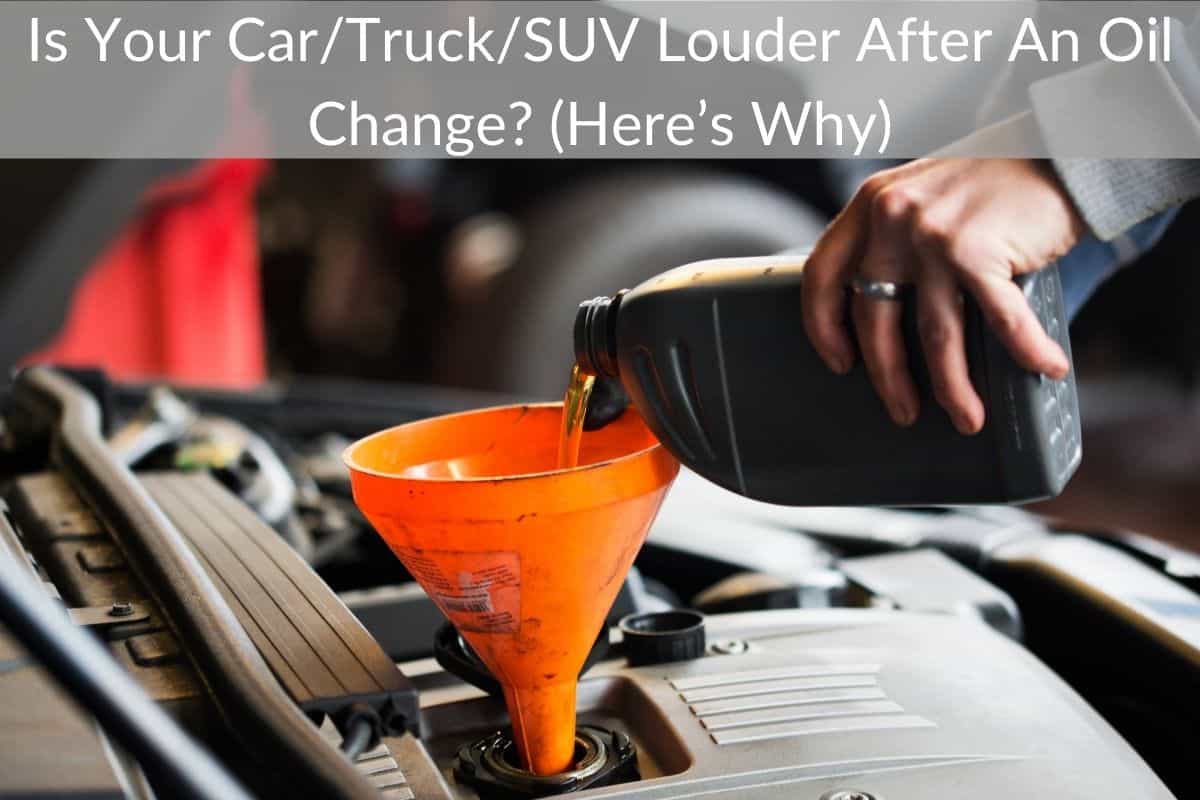 Buying a brand-new car is absolute bliss. You drive it down the road, and it just glides like butter on a hot pan. It might not be as quiet as a Tesla, but a new car does have a silent engine roaring under that hood.

But, after a year or two of driving, it’s nowhere close. Every turn, every bump in the road, every time you hit the brakes, there’s a noise that bumming you out.

That’s normal. That is the regular wear and tear that every car has to face when driven for a certain period of time.

However, if you just got an oil change and are wondering why your car is suddenly louder than before, you’re at just the right place.

If you just got an oil change done at a shop and your vehicle is suddenly running far louder it is likely that the air filter did not get reseated properly. Most shops check the air filter when changing the oil and if the filter housing didn’t get latched properly it will cause your car to be much louder.

Of course this isn’t always the reason why your car is now running louder after an oil change but it happens far more often than you might think. This is especially true when you consider that these shops should know better than to leave the filter housing open.

To check if this is the issue causing your car to run louder you just need to pop the hood, locate your air filter, and see if the housing is closed properly. If it is clipped shut it’s a good idea to open it and make sure the air filter is in there (yes sometimes places forget to put the air filter back in entirely).

You should also check to make sure that the filter is seated properly and then close the filter housing and make sure it is clipped shut.

Now take your car back out to see if that has solved the issue with it running loud. If not then keep reading the rest of this article as I will go into other reasons why your car could be running loud now.

Reasons Why Your Car Might Be Louder After An Oil Change

A lot of people will tell you that the additional lubrication after an oil change lets the engine run how it’s supposed to. While this is true, it is not a reason why your car should be louder.

If you lubricate a creaking door, does it make less sound or more? Oiling metal tools and accessories reduce friction which is the primary contributor to noise in cars.

If your car is making louder noises after the oil change, than it did before and you already checked the air filter (mentioned above) here are a few additional reasons why the oil change might have made your car louder.

The first and the most common problem that even professional mechanics make is that they don’t use enough engine oil. The instinct to cheap out on engine oil is pretty understandable, and we get why you’d want to do that.

However, if you’re not using enough engine oil, you might end up ruining your engine.

When you’re doing an oil change yourself, check the manual and see how much oil your car needs. That is the minimum amount your car requires, and anything less than that will cause its own set of issues.

So, sufficient amounts of oil will help your engine run smoothly. Moreover, make sure that the draining bolt is tight enough that it doesn’t leak oil.

Putting in less than the desired amount of oil is one thing. However, putting more than necessary is also something that will damage your vehicle. Putting in too much oil is a possible cause for loud noise as well.

Another thing that you should pay attention to is that adding oil is not the same thing as an oil change. When the oil passes through your engine, it gathers up bits of excess material that chip off the parts of your engine over time.

That’s normal and doesn’t affect performance at all. However, over time, there’s so much excess material gathered up in your oil that can cause further damage.

If you’re looking to avoid that, adding oil is not an option. You have to take out all the excess oil through the draining bolt before you fill it up with the new oil.

If you’ve been running the engine for a while with insufficient oil, you can’t just add in more until you’re at the right threshold. You have to make sure that you take the current oil out and replace it.

This is something that a lot of people ignore when buying engine oil. There’s no ‘one size fits all’ approach to engine oils.

Every truck, sedan, SUV, etc., has its own specific engine oil with its unique viscosity. The viscosity of oil defines how thick or thin the oil is.

Your engine will probably run, but it’ll overheat and create a bunch of noise. If your vehicle continues to run on the wrong kind of oil, you’re at risk of damaging your engine.

Do some research and check what the recommended oil type is for your vehicle.

Oil filters are very easy to mix up. This is a mistake that a lot of people, even mechanics, make. When there are dozens of cars sitting in your garage, it’s very easy to accidentally swap out the oil filters.

On paper, every oil filter works the same, but every car has a specific demand when it comes to oil flow. If you’re not using the right kind of oil filter, your engine might get more or less fuel than necessary.

Oil In The Oil Filter

You’d be surprised at how many people make this common mistake. Everyone knows where the engine oil goes. However, some of your engine oil has to go to the oil filter as well before you put it on the car.

The reasoning behind this is pretty simple. The oil pumps first load up your filters with the liquid and then the engine. If there’s no existing oil in the filter, it’ll start sucking up air and feed it into your engine.

This is a huge problem and will most definitely create extra noise in the car.

What Should You Do If Your Car Is Louder After An Oil Change?

If you just took your car to the mechanic for an oil change and it’s much louder following the visit, then there’s a good chance that the mechanic messed something up. If there’s a lot more noise, I would recommend checking the air filter first.

If it’s not that then you should take the car back as soon as you can. Running a car with any of the above issues isn’t a good idea. It might not affect your car immediately, but if things continue that way, you may ruin your engine.