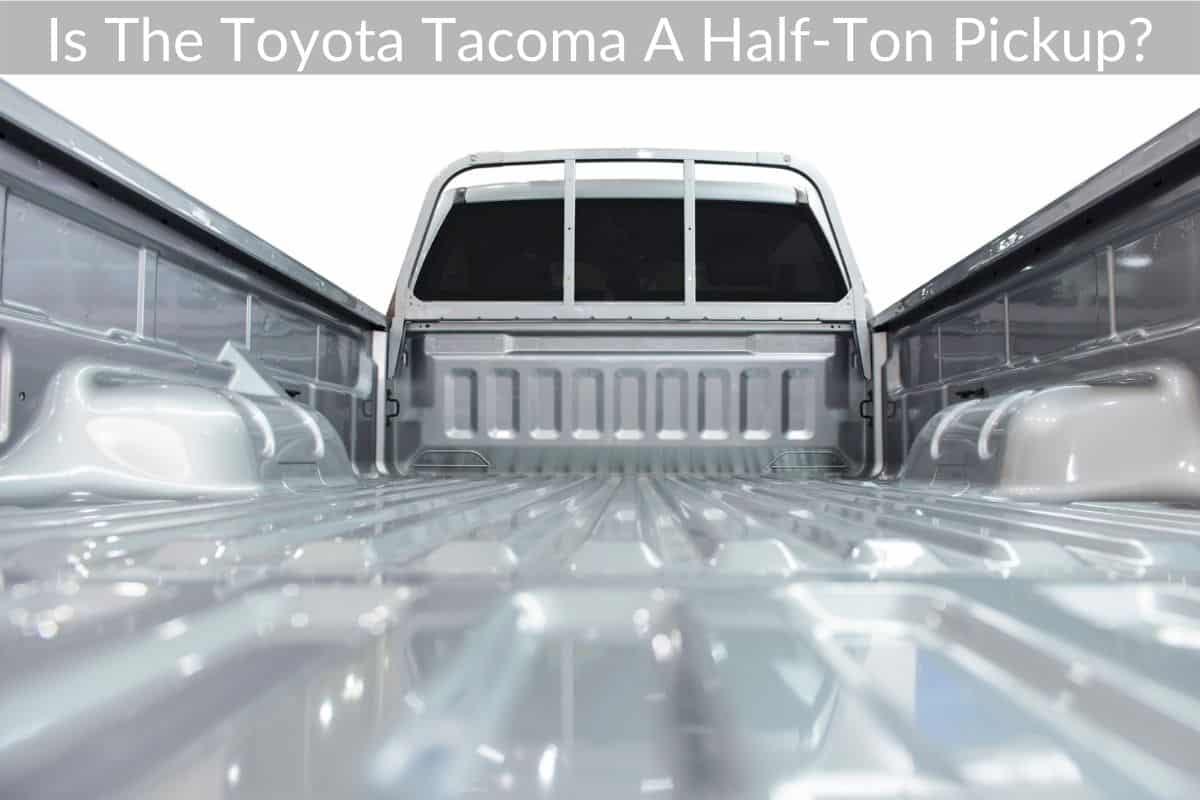 When shopping for a new vehicle, in particular a pickup truck, you’re going to come across multiple terms you might not have heard of before. Unfortunately, because old habits die hard, some of the terms are going to get confusing, and that includes the terms half-ton, three-quarter-ton, and one-ton pickup trucks.

If you are looking at a Toyota Tacoma you will likely wonder what kind of truck it is. Is it a half ton truck?

A Toyota Tocoma is actually considered a three-quarter ton pickup and is not considered a half ton truck. Most Toyota Tacomas can carry over half a ton in their payload capacity putting it in the ¾ ton category.

There are multiple reasons why Toyota Tacoma’s are classed a great pickup truck and continue to hold their resale value years after purchase. Among the numerous advantages of the sturdy and durable Tacomas, their payload capacity has always been a big hit with compact pickup truck fans.

Find out below what makes a truck a half-ton pickup, what the Tacoma is classed as, and why there’s an ongoing debate about it.

To see the most popular truck gadgets just click here.

What Is A Half-Ton Pick-Up?

The predated definition of a half-ton pickup truck is that it is a pickup truck that can carry up to 1000lbs in its payload capacity.

When defining a ton-sized truck it does not take into account the towing capacity of the pickup truck.

Awkwardly, the terminology hasn’t been updated to match the current standards that modern-day pickup payloads can handle and this can make it difficult to understand which present-day vehicles fit under which category.

Although modern-era pickup trucks can carry much greater payload capacities, like the Ford-F150 which can carry a payload of 1745lbs to 2238lbs and is still classed as a half-ton, the terms half-ton, three-quarter-ton, and one-ton remain unchanged.

When referring to a truck as a type of ton – half-ton, three quarter-ton, or one-ton – we’re talking about the payload capacity of the truck, not the weight of the truck or the weight it can tow.

Meaning, it only considers how much weight the truck can steadily hold in its bed, combined with its passenger and cargo weight.

The different sizes of trucks themselves are also not considered when discussing their ton-load. For example, the Toyota Tacoma is a light-duty, midsize truck, but this is not taken into consideration when referring to a Tacoma as a specific ton of truck.

You could have a truck that weighs 4 tons but if the truck is referred to as a half-ton truck, it means the payload it can carry is only up to half a ton. Of course, this is in traditional terms of the meaning half-ton.

Here are the actual customary definitions of each:

A half-ton truck can carry up to 1000 pounds in its tray bed combined with cargo, and passenger seating

A three-quarter-ton truck can carry up to 1500 pounds in its try bed combined with cargo, and passenger seating

A one-ton truck can carry up to 2000 pounds in its tray bed combined with cargo, and passenger seating

Is the Toyota Tacoma a Half-Ton Truck?

Contrary to popular debate, the Toyota Tacoma range is not considered a half-ton pickup because they can carry more than half a ton in their payload capacity. This has always been the case as you will see below since their release in the mid-1990s, Tacoma’s have always managed a payload capacity above a half-ton range.

Since the first-generation of Toyota Tacomas was released in 1995, their payload capacity has always been greater than 1000lbs, making them a three-quarter-ton pickup.

Although the payload capacity of the second-generation Tacoma’s is slightly less than the first-gen capacity, at 1650lbs the second-gen pickup still can’t be classified as a half-ton pickup. The towing capacity has also been elevated to a mega 6500lbs.

Third-generation Tacoma’s can handle up to 1620lbs in their payload capacity and with the right towing add-ons can tow up to a massive 6800lbs.

If you’re in the market for a pickup that can assist you with everyday needs and activities, light-duty work-related hauling, or something like getting a dirt bike to and from competitions, a light-duty half-ton truck is what you’re looking for.

Here are some examples of a half-ton truck:

Although these are examples of vehicles that fall under the half-ton pickup truck category, all of these vehicles can carry well over the 1000lbs payload capacity in their truck bed including passenger and cargo weight.

In the present day, most half-ton pickup trucks can carry a maximum payload between 1000lbs and 3000lbs.

As mentioned earlier, three-quarter-ton pickup trucks can handle a payload up to 1500lbs and this is the category Toyota Tacoma falls under.

You’ll see this debated widely but we’re choosing to put the Tacoma in this spectrum because technically, judging by the weight ratios, this is where it makes sense to put the Tacoma based on its payload capacity since 1995.

Alongside the Tacoma, other examples of three-quarter-ton pickup trucks include:

The above-mentioned trucks have an exceptional towing capacity as well as a payload capacity of over 1500lbs. They are, however, still nicknamed three-quarter-ton pickup trucks.

Today, most three-quarter-ton pickup trucks have a payload capacity that ranges between 3000lbs and 4000lbs.

Moving away from light-duty and compact size pickup trucks, the one-ton pickups are designed for heavy-duty haulage with a payload capacity, truck bed combined with passenger and cargo weight, of up to 2000lbs.

As you can see, the max payload is well and truly above one ton, which is typically deemed 2000lbs (907kg).

One-ton pickup trucks generally have a payload capacity that starts at approximately 4000lbs. These pickup trucks tend to have a great towing capacity too and are better used for heavy-duty work-related reasons.

The Gross Vehicle Weight Rating (GVWR) is the figure that manufacturers use to determine a safe payload capacity for each vehicle.

Because the weight ratings are so outdated, the classifications are used as general guidance for customers to understand the range the vehicle falls in.

Weight classification in vehicles has become complicated because the old terms of what makes a half-ton, three-quarter-ton, and one-ton pickup truck have not been updated alongside updating the vehicles.

Now that vehicles can handle much greater payload and towing capacities, it’s a good idea to check all the specifics of a vehicle rather than going by the payload capacity, before deciding what’s best for you and your needs.

Don’t judge a car by its weight, judge it by its durability and resilience and if you’re after a light-duty vehicle that’s compact and great for everyday use including off-road adventures, the three-quarter-ton Tacoma is still the way to go.