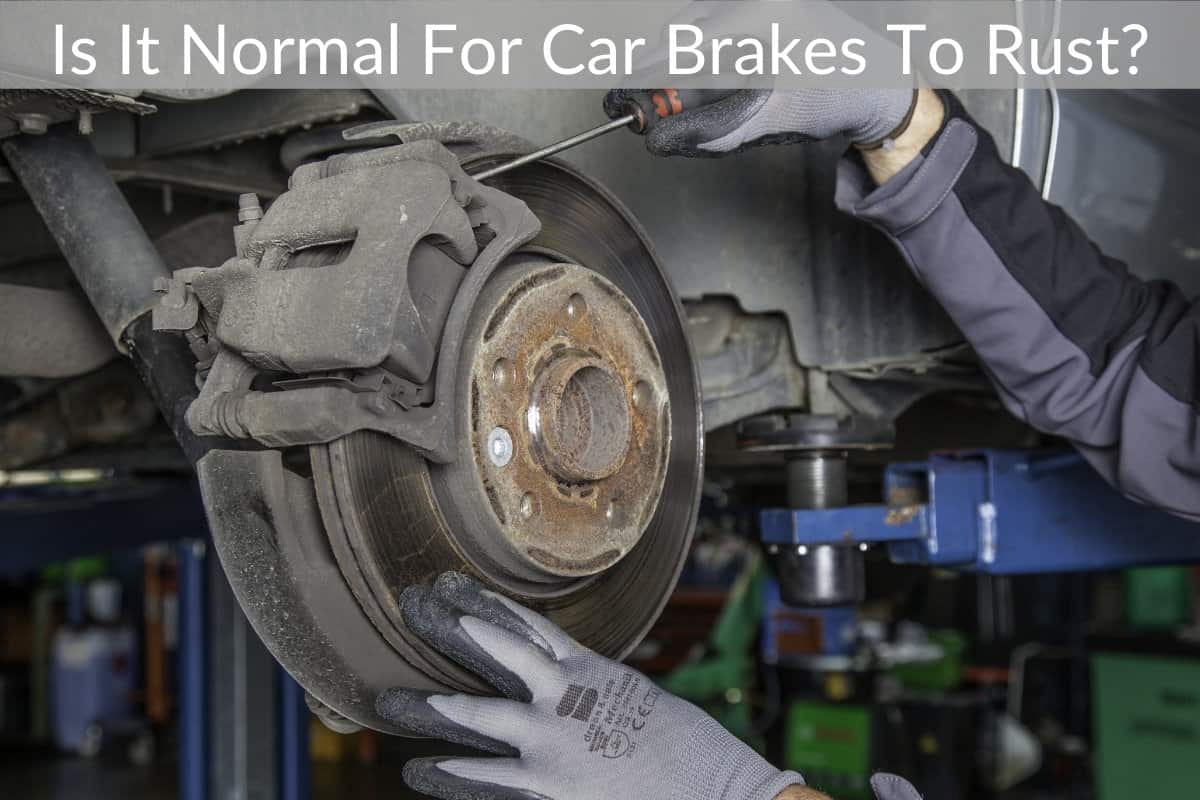 If you really think about it, your entire brake pad is made of one material; steel. It might be strong and is literally used to make most of your car. However, one threat to steel is corrosion.

If your car has been sitting in a wet location for a few months or has had one too many showers in the rain, there’s a chance that some rust might start forming on the brake pad surface and even on the rotors.

This is very common, but it shouldn’t be ignored.

Car brakes rusting is a relatively common occurrence especially when the vehicle is not used daily. Most of the time all you have to do is drive the vehicle for a while and the rust will get ground off from normal braking.

In the rest of this article I will cover all you need to know about brake rust, why it happens, and how you can avoid it.

If you want to see the most popular car accessories on the market currently just click here.

Why Does Brake Rust Happen?

First of all, brake rust does happen. It happens to every car except exotic supercars that have carbon-ceramic brakes. This brake type is very rare and has one major benefit; zero rust. If you own normal cast iron brakes, you’ve likely seen brake rust at least once in your life.

However, not every type of rust is cause for concern.

The brake rotor surface tends to get covered in a thin layer of rust every now and then. Usually, rust takes time to set in so this can happen after a few days or weeks of not using the car.

This harmless rust can form after even just one or two nights out in the rain. This coating of rust is practically harmless as it gets worn off automatically just by you driving and braking. After one or two drives, your brake pads will rub off all that rust.

With every brake, the pads will scrape off a small bit of rust until it’s all gone.

The only time the rust poses a real, dangerous threat is when you let the car sit idle for a long time. The rust we talked about above only forms on the surface of your brake rotors, and they can be easily scraped off without much of an issue.

But, if your car is sitting in the elements for a month or longer, rust can start eating away at the metal elements on your brakes.

This is called surface pitting, and it greatly affects the braking capabilities of your car. If your car has been sitting outside somewhere for several weeks, you should take the necessary steps and ensure that your brakes are smoothed out before driving the car again.

How Can You Fix Brake Rust?

There are two basic ways to get rid of brake rust. If it’s the common surface rust that hasn’t had enough time to set its claws deep into your brake rotors, then simple braking while driving the vehicle should do the job just fine.

Drive your car as you would normally at speeds less than 30 mph. Try to brake strongly once your car picks up some speed to remove more of the rust.

However, you don’t have to brake rapidly. Even slow gentle braking  will still remove the rust from the rotors over time however the harder you brake the faster the rust will be removed.

If you had to get rid of the worst type of rust, you need to first check if the brakes are still worth saving.

To do this, you’re going to have to do some disassembly and check whether there is a sufficient amount of thickness left on your pads and rotors.

Just see how much the rust has eaten through your brakes. If it’s too much, you’re probably going to have to toss the brakes in the trash can and get new ones.

But, if the thickness is still there, the brakes are still usable. You just need to get rid of all the rust.

To do this, you should probably use some industrial-grade cleaner like CRC 05089 or something of the sort.

However, it’s also important to note that you shouldn’t be using any kind of oil on your brakes.

Brake pads slow your car down by creating friction between the pad and the rotors. This friction is what actually slows your speed. By adding oil to the mix, you’re going to be affecting your brakes quite a bit.

It might get rid of the rust, but it worsens your car’s braking capabilities and could easily cause an accident.

How to Prevent Brake Rust?

There are a few different prevention techniques that you can use to help prevent your brakes from rusting. I will give the top three ways to prevent brake rust below.

Keep Your Car Safe From Rain

The first and most obvious solution is to stop the problem at its core. If it’s raining outside, park your car somewhere that doesn’t come in direct contact with the water.

If you have a garage, make sure you park your car there.

Don’t Let the Brakes Dry on Their Own

If your car did sit through a lot of rain, there are steps you can take to ensure that the rust doesn’t settle in.

Take your car indoors before the sun comes out since drying naturally is what helps start the corrosion procedure.

If you want to stop that, wipe down your brakes with a cloth and get rid of any moisture hanging around in that area. That will severely stall the rusting procedure and make sure your brake stays in great condition.

Your car doesn’t need to stand in the rain overnight to rust. Just letting it sit idle in a damp environment is enough to start the oxidation reaction.

Never leave your car in a humid space where moisture has enough time to accumulate on the brakes. If it has to sit somewhere, try and take the car out for a drive every now and then.

As I’ve already discussed, driving the car and braking naturally gets rid of most of the rust, so you should be in good shape with a drive or two each week.

So, to finalize the entire conversation, brake rust is not dangerous. It’s very common, and most of the time, the brake pads are going to do the job of removing the rust for you.

However, if you have let the rust sit on your rotors for a long period of time you might have to change them out or manually clean them before using your car the next time.