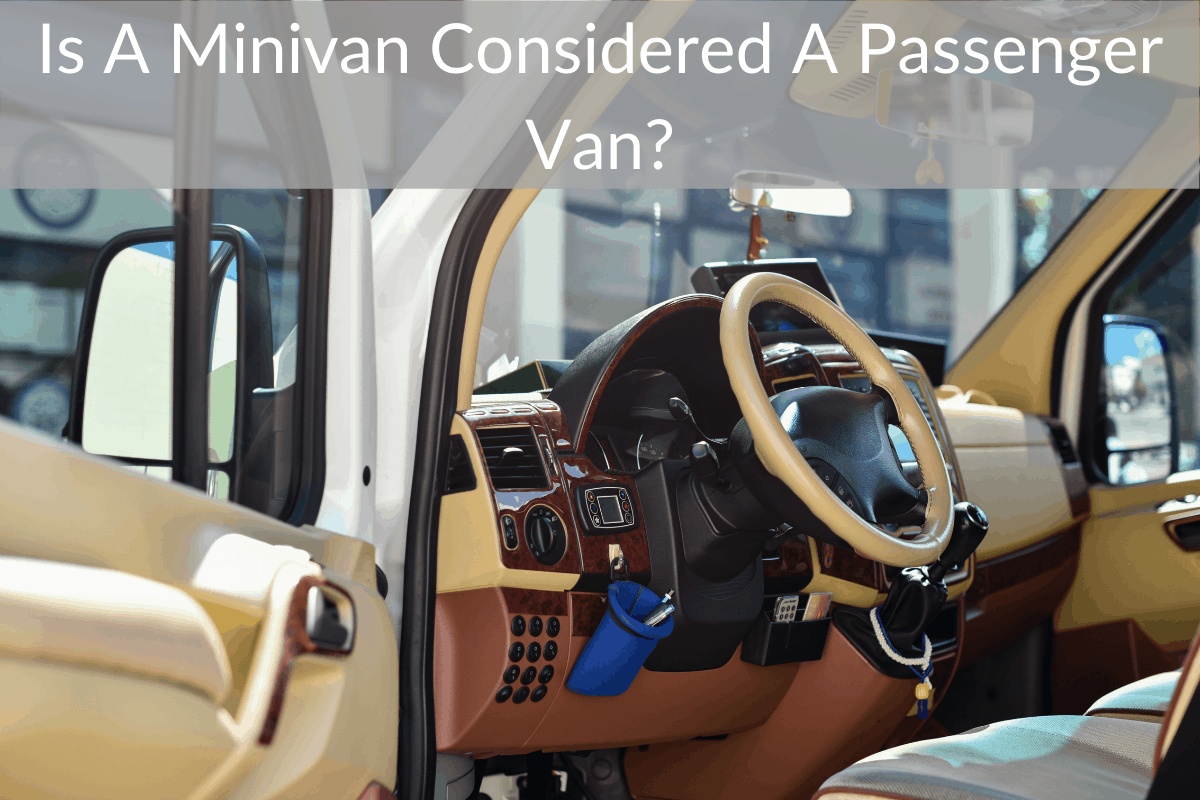 Minivans are the ideal family vehicles. They come with tons of family-friendly features, large cargo-carrying space, and modern amenities.

A minivan can easily accommodate 7 to 8 people comfortably, while also providing ample space for carrying luggage and other items for the passengers. However, because of this ability to carry so many people often a minivan will be confused with a passenger van.

Is a minivan and passenger van the same thing or not?

How the minivan is used is what will affect whether it is considered a passenger van in regards to the law so although a minivan carries a lot of passengers, if it is for private use then according to the law in most places it wouldn’t be a passenger van.

However, if a minivan is being used by a business to transport people then it would be considered a passenger van.

What is the difference between a cargo van and a passenger van?

Cargo vans and passengers vans are actually incredibly closely related and often they will have the exact same body and look almost exactly the same.

The metal is there to prevent the cargo that is being hauled from accidentally breaking a window. And it also helps keep the cargo safer from theft since no one can see inside the vehicle.

Typically cargo vans are used by tradesmen who need to haul around a lot of tools or special parts while passenger vans are used to move around large groups of people.

What features make minivans the best kind of passenger vans?

Although there are many types of passenger vans, the minivan is by far the most feature rich van on the road. Often a minivan will have all of these extra features since they are designed for personal use while a van that is designed for only moving people for business will be much more bare bones.

Some common features that you will find in a minivan which makes it useful for personal or business use are:

These items allow the driver to see what’s going on in the back without turning around. It’s an advanced technology feature, also called a cabin watch. Drivers can get a thorough image of the second and third-row seats, including kids in rear-facing car seats.

Being able to see the people that are behind you is helpful if you are traveling with kids or if you are transporting people for a business so this feature is a great one to have.

Dark-tinted glass provides more privacy than the ones that are clear. This additional privacy is especially important to people who are traveling with younger children as they won’t want strangers to be able to see into the vehicle.

Having tinted windows also prevents the sun from heating up the interior of the vehicle which can be extremely helpful if you are in a location that gets really hot during the summer.

This is one of the most important features families look for when buying a vehicle. No matter if the minivan is being used by a family or business, having the ability to fold the unoccupied seats allows for many more uses that aren’t present in full size passenger vans.

These seats can also be removed entirely or entirely folded into the floor which provides even more space for accommodating cargo and luggage.

This feature allows for a hassle-free opening on both sides of the vehicle. In the older models, minivans had only one door which had to be manually slid open which was not ideal in the least. As a result, kids faced problems in getting in and out of the vehicle.

Now, with this advanced feature, doors can open and close at the press of a button and everyone can easily slide in or out of either side.

With older minivans, the seats had to be removed manually to get extra space in the middle for carrying cargo. Moving the seats to the back or removing them properly was always an issue. However, now with foldable seats, things have become easier.

Of course the main issue with this feature is it is currently only available in Dodge or Chrysler minivans but with the patent due to expire in a few years it will soon be standard on all minivan models.

Especially while on a long drive, kids (and adults) tend to become bored quite easily. Nowadays, minivans come with an integrated entertainment system which will often also have rear seat screens where the passengers can watchTV shows or movies, which is an incredibly beneficial feature.

If the temperature inside the vehicle has become extremely cold or hot, you can change the settings using a remote or at minimum the controls in the ceiling by the second row of seats. Being able to control the temperature in different zones of the minivan independently makes keeping everyone at a comfortable temperature much easier than it used to be.

Often people (especially parents) will have to carry a lot of essential items like purses, toys, snacks, strollers, etc. These items keep their hands occupied which can make opening or shutting the truck lift gate difficult. However, with the power trunk available, they can keep these essentials there and access open or close it with the touch of a button.

Multiple passengers might need to charge their phones at the same time. Hence, an extremely useful feature has been added to modern minivans is the ability to charge from many different locations in the minivans.

Nowadays they come with multiple USB ports, allowing passengers to charge multiple electronic devices at the same time and in multiple places keeping everyone happier.

If you are travelling with your kids, it’s expected that the vehicle would become messy, no matter how hard you try to keep it clean there always seems to be messes left behind.

To help with this, many minivans have an onboard vacuum cleaner which makes cleaning your vehicle’s interior much less of a hassle.

With all the above-mentioned features, minivans are definitely the best passenger vehicles you can rent or own.

They have an advantage over SUVs and crossovers in being able to fit more people and luggage as well. They come with more than 150 cubic feet of passenger/cargo space that is well divided among the three rows.

Besides this, their low floors make travelling more comfortable for kids or elederly people as well.