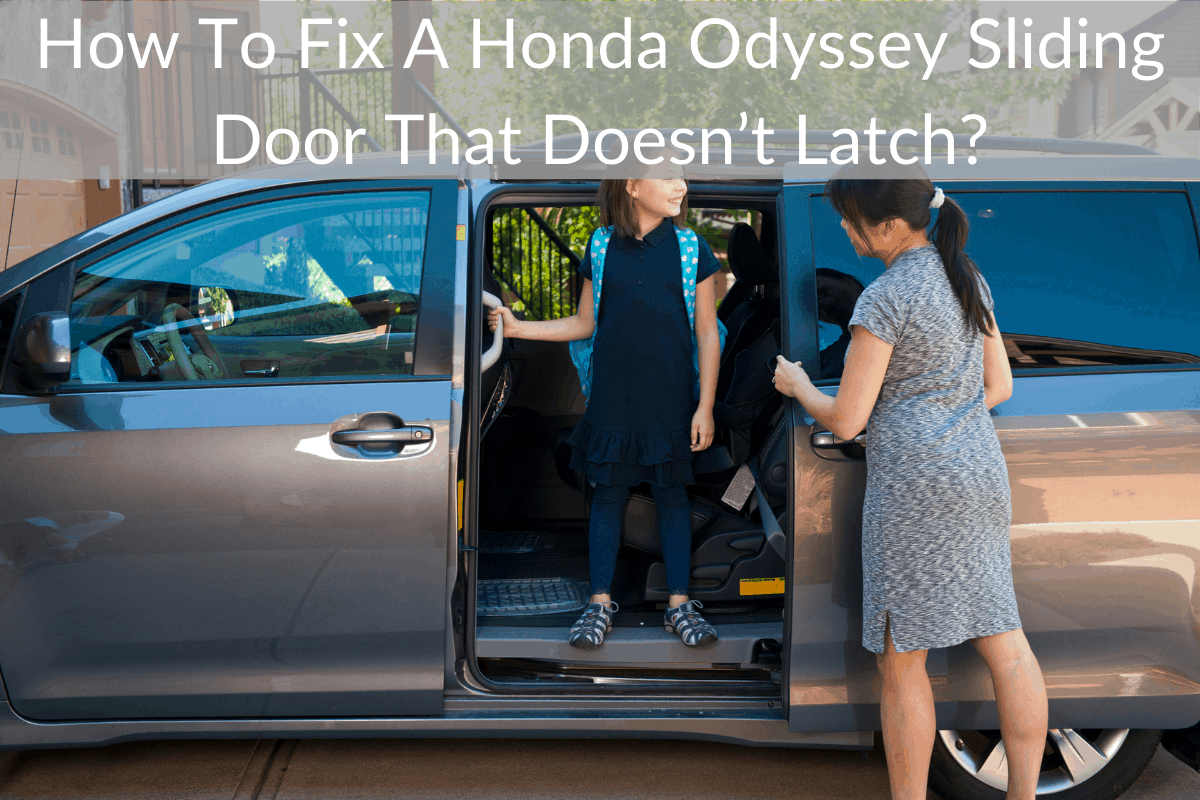 The convenience of the power sliding door offered on the Honda Odyssey is something many owners of this minivan are super happy with. They love even the other features that improve their comfort levels with this minivan however sometimes even the best features have issues. This feature is no different as sometimes the sliding doors on your Odyssey won’t latch shut. Obviously this is a big issue as no one wants to drive down the road with a door that isn’t latched as it quite simply isn’t safe so what can you do when this happens on your Honda Odyssey?

The most common reason this happens is because the latch is either frozen or stuck. If frozen you can use a blow dryer or put the vehicle in a warm garage overnight to thaw it out. If the latch is stuck you can use some WD-40 or other lubricant to try and get it moving again.

Those are far from the only possibilities as sometimes you will have to replace or repair the entire latch assembly or track or there could be a fuse issue as well. However, the most common reason is the cold or lack of lubrication so that is where I would recommend that you start.

I will cover some of the more obscure reasons this happens and how to fix it later on in this article.

Of course, these power sliding doors are extremely convenient when a family has elderly people or small kids, but when they aren’t working right or won’t latch at all the convenience is certainly the last thing on your mind. Some owners look for ways to fix the doors when the door does not automatically close or latch, while some are worried that the door does not open automatically.

Some owners might even face the problem of the door closing but opening again as it does not properly latch.

The door closes but opens again

In some instances, owners of the Honda Odyssey complain that the sliding door in their vehicle does not close at all. On the other hand, some complain that it closes completely but it then opens right back up within a few seconds. When this happens it means that the door does not properly latch with the lock on the other end. When this happens, the door will remain open even though it is not fully open, it will be open to a certain extent.

This is what causes the door to reopen since it didn’t close properly.

What to do when this happens?

When this happens, you will have to first power down the master switch that you should be able to find in the dashboard of your Honda Odyssey. Now, open all the doors in your vehicle manually. After checking the door pillars and contacts clean them using an alcohol rub thoroughly.

After you clean them, look for a door button around the back of each door or the door with the latching issue. These buttons should have rubber components. If they are misplaced, move them back to the original position. If the rubber components are worn out then getting new ones might also help.

Now, after closing all the doors manually, switch on the master switch. Then, try to open all the doors using the different switches and close them. This time, after replacing the rubber components, you should find that the door properly latches. If it does have the same issue again, there could be issues with the fuses in your vehicle.

This is also an indication that you should contact your mechanic.

If the tip given above does not work, you can try doing a manual reset. To do this, you will have to first disconnect the car battery. Then, push the door in question manually to close it. If it still doesn’t latch manually then you have an issue with the latch being stuck or frozen and not an electric issue.

Take the negative battery terminal and connect it back. Do the same thing for the positive battery terminal. This action will reset the battery. Now, turn on the vehicle by sitting in the driver’s seat. Here, look for the toggle switch and check whether it is kept off for some time. Now, push it such that it will be back on. Next, look for the sliding door buttons and you will find a couple of them. Now, push on both and keep the pressure when the door of your minivan closes. When you do this, there are chances that the doors may not budge. If this happens, you should reset the switch and try again.

Once you have done this reset there is a chance that your doors will latch properly. If not then it is likely a mechanical issue with the latch.

Your Honda Odyssey as mentioned earlier will have a latch on the sliding doors. The malfunctioning of this part can happen for the three reasons as stated below:

1. Problems with the fuse

2. Issues with the sensors

In the first reason above, the fuse should be reset, while in the second case, the sensors should be cleaned. Both these things should be done only by a mechanic however, you can do these tasks yourself if you know how to do so.

Here is what you will have to do if this is the case:

Search for the 13th fuse in the fuse box that you can find on the passenger side of your minivan. This will be the 4th fuse in the top row. Based on the model of Honda Odyssey you own, the fuse will likely show “Clock Reset” as the message. To reset the fuse, you will have to disconnect it for around 30 seconds. Then, you should put it back in and it will reset the fuse.

When it comes to sensors, you will find them on the door and body of your minivan. Of course, this placement might differ based on the year or exact trim of your minivan. Just clean the sensors once you find them. Some Odyssey owners have stated that they were not able to fix this problem of the sliding door not latching even after doing both of these things.

Assuming you are unable to fix it with either of the above methods the last thing you will want to try is unsticking the door latch (if you haven’t tried it earlier as I suggested).

In some cases, the sliding door in Honda Odyssey does not latch because the latch will have become stuck. You can solve this issue with a screwdriver or by using a lubricant. However, if neither of these options work then you will liley have to replace the close motor assembly or the latch assembly. When you get a new close motor assembly, you will find that it sometimes encompasses not just a new latch but also a motor.

If you get to this point it’s likely a good idea to take it to a mechanic and have them fix this for you so you don’t take the chance of messing something up.

When it comes to minivans, the Honda Odyssey has a great reputation as a dependable vehicle. But, when you face issues with the sliding doors, it can happen due to some simple issues or something quite complex. Just because you have issues with one of the sliding door latches does not mean that all of the doors will have issues in the future though.

You can often avoid issues with the proper and regular maintenance of the vehicle. Be sure and get the services done as per the manufacturer’s recommendation to make sure that you can prevent issues to your minivan. It will keep the vehicle and its parts in good condition for sure.