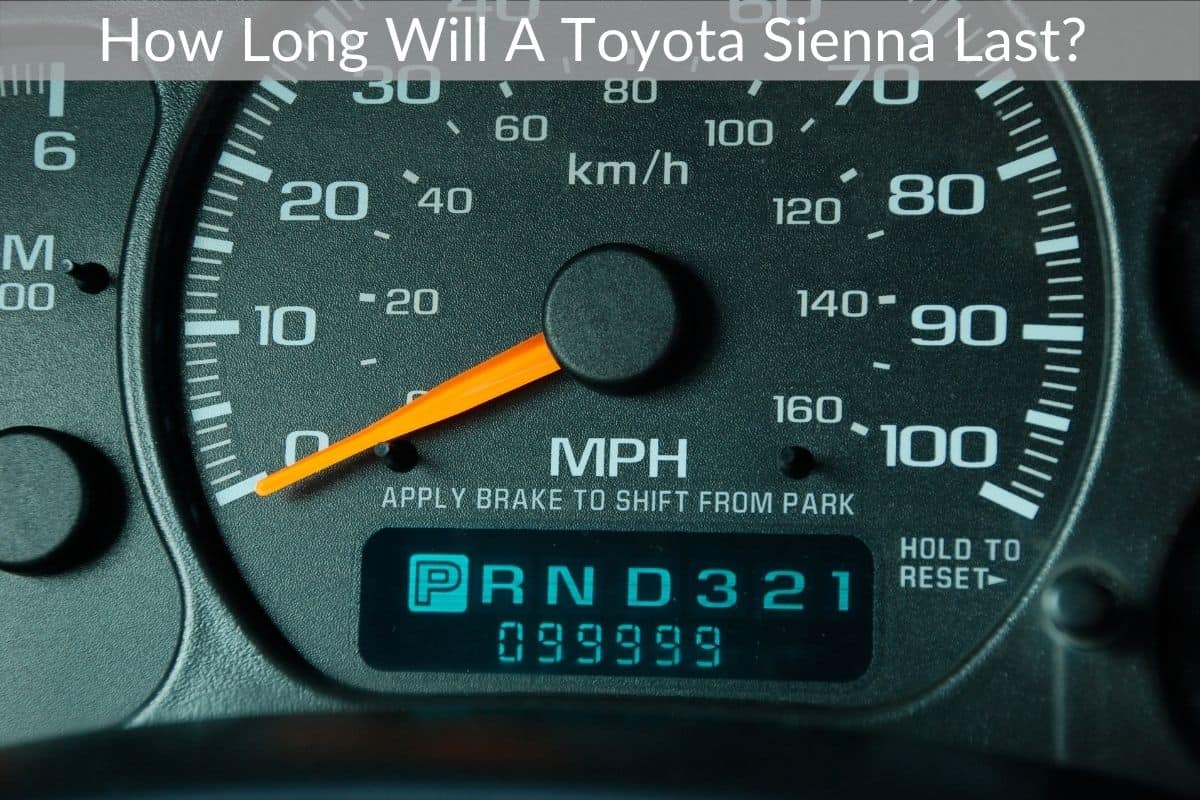 When you’re in the market for a new or used vehicle, the main concern is reliability and durability. Yes, we want our cars to be stylish, comfortable, and have great safety ratings, but we also want to be certain that when “Z” is on the horizon, we’re not going to run our last miles just before arriving.

If you are in the market for a break minivan you will consider the Toyota Sienna. How long should you expect the Sienna to last?

The Toyota Sienna is deemed a good and reliable minivan that will generally last up to 200,000 miles but as reported by some owners, has been known to last 300,000 miles or more. With the proper care and maintenance, many vehicles can reach this mileage range and last well up to 20 years.

The Sienna manages well on roads and has received a five-star safety rating from the National Highway Traffic Safety Administration (NHTSA). Safety is great and a feature we all look for when on the hunt for a new vehicle but will the Sienna last is the question.

Read on below to find out more about the average mileage of a Toyota Sienna. To see some amazing gadgets for your car just click here.

How Long Will A Toyota Sienna Last According To Toyota?

As a rule of thumb, you can usually expect anything to last at least as long as its warranty is covered.

In the case of a Toyota Sienna, the warranty options start with a basic warranty of 36,000 months and/or miles and have a warranty package that covers up to 8 years, or 100,000 miles, whichever comes first.

That said, you can expect that your Toyota Sienna should last well over 100,000 miles.

Did you know that Toyota also offers a warranty for their electric batteries to last up to 150,000 miles? That means you should expect your Toyota Sienna Minivan Hybrid will last at least a minimum of 150,000 miles if you have it serviced and maintained regularly.

As far as mileage goes for vehicles, that’s pretty good considering most modern cars are expected to last at least 200,000 miles.

How Long Will A Toyota Sienna Last According to Owners?

As reported by owners who regularly maintain and have their Sienna serviced, they have managed to track up to 300,000 miles and more in their Sienna minivans.

Typically, the average lifespan mileage of a Sienna is up to 200,000 miles which could mean your Sienna will last approximately 14 – 15 years judging by the average miles travelled in the US every year.

The battery life in a hybrid can last up to 180,000 miles before needing to be replaced and can be quite expensive to replace. The difference between a hybrid and a traditional car battery is the length of time they last.

Traditional car batteries have an average lifespan of 2-5 years so might get approximately 67,000 miles before needing a replacement compared to a hybrid that might last 13 years! However a normal car battery is far cheaper than hybrid batteries are.

American’s travel an average of 13,500 miles per year and the average lifespan of a vehicle is 12 years or 200,000 miles. In regard to the calculations of battery life above, you might have to change a traditional car battery approximately three or more times in its life.

Here are a few things you might want to know about the Toyota Sienna if you’re considering one for second-hand purchase:

So why have Sienna owners reported that their vehicle can last up to 300,000 miles and in some cases, even longer? Let’s delve in deeper below.

Why Does The Toyota Sienna Last So Long?

Until 2021, the Toyota Sienna has been the only all-wheel-drive minivan in its class since 2006. When we say, “its class”, we’re talking about hybrids.

The fact that the Toyota Sienna is a hybrid is one of the reasons it lasts so long.

Hybrids use two types of energy to make up a car’s mechanical compounds. An electric motor is combined with either a petrol or gas engine to make the vehicle run efficiently while burning less fuel.

Burning less fuel means the vehicle has a better fuel efficiency, is slightly better for the environment, and can generally last longer than traditional fuel-only vehicles.

Because of the mechanics of the hybrid cars, they can generally last between 200,000 and 300,000 miles and in some cases, even just under 400,000-mile odometers have been recorded on the Toyota Sienna Hybrid.

How To Get Better Mileage Out Of Your Toyota Sienna

To get better mileage out of a vehicle you want to regularly maintain it.

Regular maintenance of any mechanical and electrical equipment will assist with prolonging its lifespan no matter what the object. In this case, you reduce the likelihood of a car breaking down before its time.

The peace of mind doesn’t hurt either.

It takes a lot of mechanisms on the underside of your hood to simultaneously work together and make a car go.

Think of it like a human who goes running every morning, if they don’t feed themselves and look after and fix their injuries when they happen, their health will naturally decline faster than it would if they were looking after themselves properly.

Toyota Sienna owners, as noted on the forum siennachat.com, have advised that to get better mileage and years out of their much-loved hybrid, is to get things fixed when they need to be fixed. “The key to longevity is maintenance”.

It’s because of this that some Toyota Sienna owners have had their minivans last up to 350,000 miles.

Here are a few other ideas to help you get as much time out of your vehicle as possible:

If you haven’t learned how to check your vehicles fluids yet, next time you go to the mechanic, ask if they can show you some basics

It’s imperative to the health of a car that you replace worn and damaged parts as soon as needed. It will work out cheaper for you in the long run if you don’t let the issue get any worse

How Do I Know If My Toyota Sienna is Dying?

As it does with every vehicle, wear and tear eventually starts kicking in. For the Sienna, in particular, replacement parts are typically needed from around the 100,000-mile mark on the odometer.

Common wear and tear items on the Sienna include the struts, shocks, ball joints, and lower/passenger control arms failure. You might also find signs on your dash like “check charging system” regularly appear when your Toyota Sienna is needing an uplift.

Here are a few simple signs that might mean your hybrid needs replacing:

If you’re noticing signs of decline in your Toyota Sienna after 150,000 miles, it might be a sign that a major repair is due or it’s nearing the end of its lifespan.

Considering the Sienna still gets great reviews, if you keep your vehicle well-maintained and show it some TLC, you might be lucky enough to hang on to your Toyota Sienna Hybrid for over 300,000 miles.