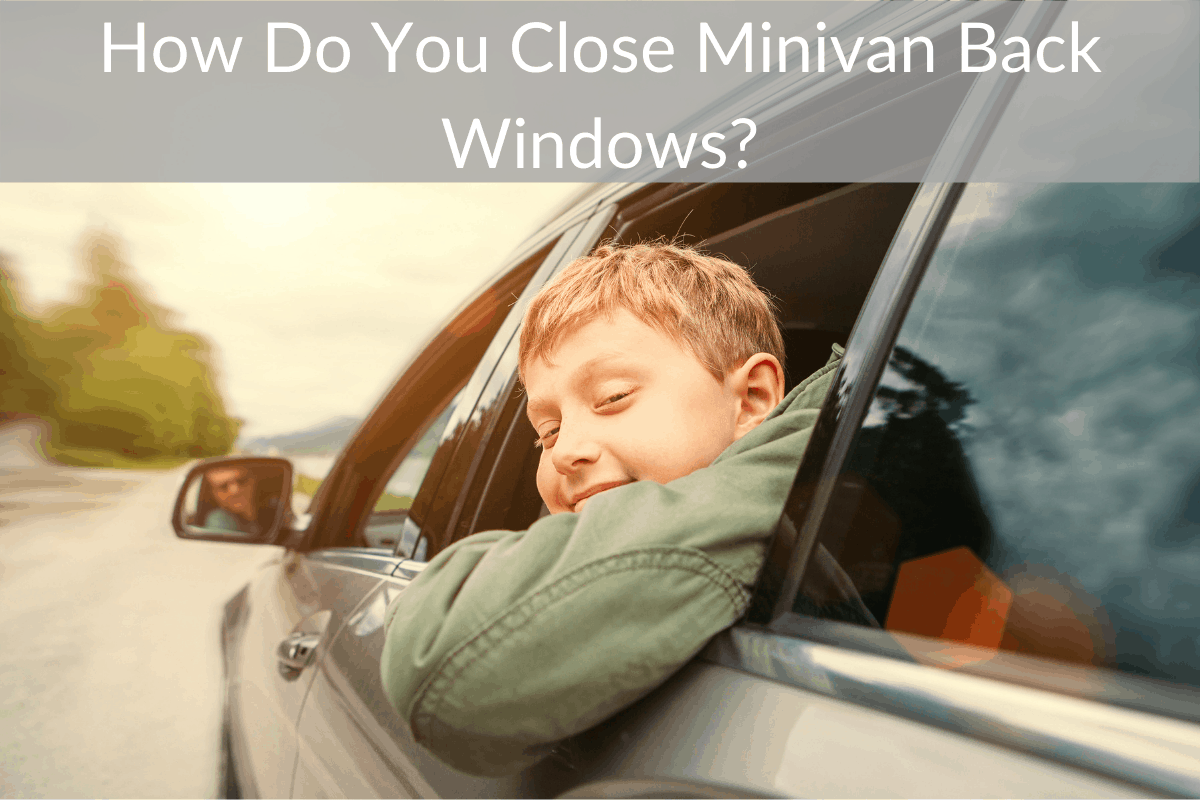 Most cars have only two rows of seats. The first one is for the driver and a passenger and then there is a second row right behind it. But minivans are designed to be more spacious than that and a third row is added to fit more people. The last row in a minivan will have windows on each side but they don’t roll down since they are over the wheels.

How you close these minivan back windows is either manually by pulling the handle to close the window and then latching it or is done with a button on the drivers door. Which method is used varies by model and the age of the minivan.

Some models have everything electric so the back windows being opened and closed is done by simply holding down the button on the drivers door until they are in the desired position.

However, there are still some vehicles that the rear windows are manual so to open you will grab the latch that is on the back part of the window and pull on it to unlatch. Once it’s unlatched you then just have to push the window out and then push the latch until it holds it out.

To close the window you just pull on the latch/handle to pull the window shut and then latch it closed again.

Some minivans will also have rear hatch glass that goes up and down like a normal window as well. That window opens into the trunk so you don’t have to open the trunk for throwing in things like backpacks or groceries.

It is very easy to open those windows if your minivan is equipped with one.

There will be a button present on the trunk door, right below the hatch glass. Press it and the window will unlock. Pull the latch to open the window and keep your grocery bags inside. Push the latch back and lock the window in place.

Knowing how the windows open and close on a minivan is important to allow you the most flexibility when you are using your minivan.

Do all minivan windows roll down?

Which minivan windows roll down will depend on the model and year of your minivan.

Some minivan models even have a certain sequence of buttons that you can push on the key fob that will allow you to open the windows without even getting into the vehicle.

However, this varies considerably based on which minivan make and model you have as well as the specific year of the vehicle. It’s best to check the owner’s manual for your specific vehicle to see if your model offers this option or not.

Many minivan models have windows that also come with built in sunshades for the second and third rows. If your minivan has these then they will be at the base of the window and can be pulled up and clipped when the sun is at a bad angle.

This feature comes in handy when the weather is really sunny. But if your minivan doesn’t have these you can easily get the second and third row windows tinted extra dark to act like sunshades all of the time (just make sure you follow the laws in your location for window tinting).

Do all minivan seats fold down?

As with the windows rolling down, which seats will fold down in your minivan will vary by make, model, and the year of your minivan.

Minivans are specially designed to carry a lot of people and a lot of cargo. They are very big and come with a lot of space but if you find yourself needing more space, then you can easily make more space by folding down or removing the seats.

Obviously folding the seats into the floor is a lot less hassle than removing them but do they all fold down?

This technique is called Stow ‘n Go on both the Chrysler and Dodge models. There is a hollow space behind the third-row seats which allows these seats to be folded down and stored in those hollow wells. With all Dodge and Chrysler minivans you will also be able to fold down only one seat if you need the other one still up for someone to sit in. You can fold both the seats or just fold one of them depending on your current needs.

There are similar hollow gaps behind the first row under the floorboards. You can use that space for holding cargo like grocery bags, sports equipment, etc. or you can fold the second row seats into that space to give you extra cargo capacity that you need.

All you have to do is push the front seat forward and remove the carpet of the second row. There is a space under the floorboards that you can fold the second row seats into. You just have to fold the seat down and guide it into the empty space.

Then just put the carpet back on top and pull back the front seat until you hear a click sound.

Being able to fold both the second and third row of the seats in a minivan is especially useful when you are trying to haul large items such as TVs, furniture, drywall, or plywood! All of those items (and more) will fit in your minivan if all of the seats are folded down or removed

The reason that Dodge and Chrysler minivans are the only ones that all of their rear seats fold into the floor is that they have a utility patent on the second row folding into the floor until August of 2023 (assuming the patent laws don’t change before then).

If the laws don’t change then it’s likely that the 2024 minivan models for all manufacturers will all have 2nd and 3rd row seats that fold into the floor.

I hope that this article has been helpful in answering your questions about the rear windows on a minivan as well as some additional information about their seats folding as well.

If you have any questions that weren’t answered in this or any of the other articles then please feel free to contact me with those questions and I would be happy to help in any way that I can.