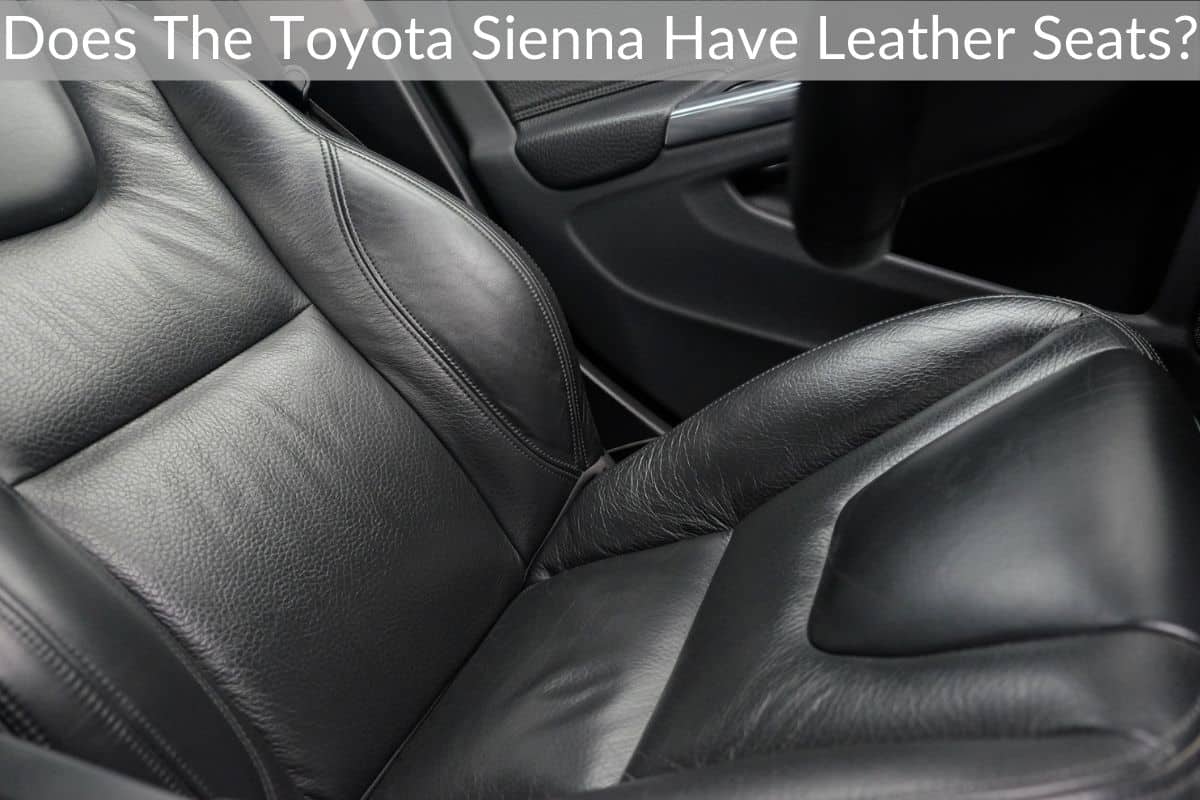 Toyota has offered consumers absolute luxury in its Sienna minivans and the release of the latest 2022 Sienna is no different from previous years when it comes to superior technology, reliability, and interior layout.

You can find perforated leather, genuine leather, and SofTex synthetic leather in the XLE, SE, XSE, Limited, Platinum, and Premium versions of the Toyota Sienna from 2015 to present. The only Toyota Sienna vehicles that offer leather seats are those that are higher than the L and LE Sienna trims.

We all love a bit of luxury and Toyota never disappoints in that field. Although consumers aren’t exactly thrilled about the latest Sienna’s from 2021 to present being hybrid-only vehicles with less horsepower than its competitors, there isn’t a lot of negative to be said about Toyota’s ability to impress with interior design features, including leather seats.

Keep reading below to find out exactly which Sienna’s provide leather seating in their trims. To see some amazing gadgets for your car just click here.

What Is The Difference Between Perforated, Genuine, And SofTex Leather?

If you’re a leather fan you know that these leathers don’t look or feel the same. If leather is of no value to you, you might not even notice the difference between each type of leather.

Obtained from a process called “tanning”, genuine leather is made from animal hide and is durable, strong, and flexible, and is also much heavier than other materials.

Leather has been used to make clothing and other items for over 7000 years.

Perforated leather is genuine leather but with small symmetrical holes cut into it mostly for decorative reasons.

For vehicles, perforation is said to be good for breathability to prevent sweating, and also to better support the effects of heated seating.

Which Toyota Sienna Has Leather Seats?

Not all Sienna’s offer leather seating in their trim model and that’s ok because it’s part of what sets the superior editions apart from the base range models.

Toyota has incorporated genuine leather, vinyl, easy-to-clean fabric, perforated leather, and SofTex synthetic leather into all of its Sienna models for practicality, comfort, durability, and because it looks great.

Here is the Toyota Sienna’s that have leather seating in the interior:

There aren’t many differences between the 2015 – 2016 Toyota Sienna models when it comes to the quality design of interior comfort.

2016 has some additional entertainment features and was America’s best-selling minivan for the second year in a row as reported by goodcarbadcar.net. It’s easy to see why when you look at the superior features in technology and safety this top-notch Sienna has to offer.

The 2017 Toyota Sienna was designed to perform better on fuel efficiency. The 2016 Sienna produces 266 horsepower whereas 2017 boasts 296 horsepower with a 3.5-liter V6 direct-injection engine.

The interior features of the 2017 are like their previous 2015 and 2016 models, and leather seating options have not changed in the following models:

The third row stow and go seating is not made in leather upholstery and is made in premium vinyl.

Along with additional safety features, the 2015 XLE boasts multi-heated and perforated leather-trimmed seating for extra comfort.

Much like the SE, XLE third-row seating is still made from premium-grade vinyl upholstery.

The next Sienna trim is a step-up from the XLE is the Limited Sienna.

With premium sound quality through a subwoofer and 10 JBL speakers, a leather-trimmed and heated steering wheel, a nifty little microphone so the driver can be heard clearly from the rear seats, and leather-trimmed seating, these are just some of the Limited features we love about the 2015 Limited Edition Toyota Sienna

All Sienna trims in 2015 – 2016 come standard with front-wheel drive (FWD) but SE, XLE, and Limited can be purchased with all-wheel drive (AWD) with 18-inch alloy wheels.

Upgrading to premium add some entertainment features along with some stylish highlights like the moonroof, Entune smartphone integration, a rear-seat entertainment system with DVD/Blu-ray and additional outlets, and upgraded leatherette upholstery for the third-row stow and go seating.

The 2018 Toyota Sienna introduced the keyless entry and some exciting new features in safety technology including forward collision warning and pedestrian detection.

2019 Toyota Siennas continued to offer similar features as the 2018 and the interior remained the same regarding upholstery options. The starting price was slightly higher in 2019 as is expected and the newest feature is the Apple Car Play addition to the entertainment and audio system.

Boasting five trims and a Premium add-on for models SE, XLE, and Limited, the 2020 release of Toyota Sienna vehicles incorporated the latest enhanced technology in safety design and entertainment for the whole family but the only difference in interior upholstery was the all-new Nightshade Edition.

The first two models, L and LE, had standard cloth upholstery or easy-clean fabric and cannot be upgraded for perforated or full leather-trimmed seating.

Previous models of the Toyota Sienna have had perforated leather upholstery in the sports edition models, but the 2018 and 2019 Sienna changed it up for more luxurious full leather seating for front and second-row seats.

The 2018 and 2019 XLE offered more safety and improved technology with rear parking sensors and integrated navigation and also now presents with full leather-trimmed seating for front and second-row seats.

Front and rear parking sensors, surround-view parking cameras, rain-sensing windshield wipers, and a heated leather-trimmed steering wheel, are just some of the features that set the limited Toyota Sienna apart from the other models.

Toyota released the 2021 Sienna with an all-new design under the hood and elaborate and comfortable features in the exterior.

The trims have been upgraded to LE, XLE, XSE, Limited, and Platinum and start at approximately $34,500 up to approximately $50,000 without additional entertainment or premium add-ons.

Although lacking in horsepower with its hybrid only-design, with an approximate range of 648 miles, this hybrid minivan offers drivers a safe, luxurious, and reliable vehicle with the extra mileage advantage to brag about.

The XLE comes with SofTex synthetic leather seats that are easy to clean and highly resistant to spills and mess.

Both front seats are heated and the XLE is offered in 7- or 8-seater options.

Some people love a bit more character in a car and sports editions offer that little bit more “hip to your hop”. The Sports Edition of the Sienna does not disappoint.

Although previous models have provided drivers with genuine leather or perforated leather, the 2021 Executive Sports Edition has gone with a friendly SofTex synthetic leather trim.

It’s easier to clean, soft to touch, durable against stains and tears, and weighs half as much as real leather does.

Moving away from synthetic materials, this 2021 hybrid trim offers interior luxury with genuine leather-trimmed seating for the front and second-row passengers.

If you’re in the market for a new family vehicle that features comfort, the ultimate safety elements, entertaining and forward-thinking technology, is eco-friendly, and offers great fuel economy, the 2022 Toyota Sienna is the right hybrid minivan for you.

Talk about nice, the XLE Sienna is the second model up from the base range and offers 8 seats in total and SofTex synthetic leather seats for extra comfort and a leather-wrapped gear shift among other great interior characteristics for driving in pure contentment.

The XSE offers all the same standard features that the LE and the XLE provide. The hybrid Sports Edition also offers SofTex leather seats like the XLE but for the sportier look merges dual-tone SofTex seats.

Sticking with the eco-friendly SofTex synthetic leather, Toyota has opted to combine both synthetic and perforated leather in the Limited 2022 edition of the much-loved family Sienna.

With the SofTex interior, we can see that Toyota is moving toward an eco-friendly range of vehicles alongside their now hybrid-only production of the Sienna variety which will see Toyota closer to the goal of at least half of all new vehicle sales in America being electric by 2030, as announced by President Joe Biden in August 2021.

If you like the feel of leather but not the idea of leather and how it’s made, then Toyota’s SofTex synthetic leather-trimmed seats are the way you want to go.

Enjoy luxury and relaxation in the Sienna and don’t feel bad about wanting to hang back in the car for a bit longer to enjoy the comfort.