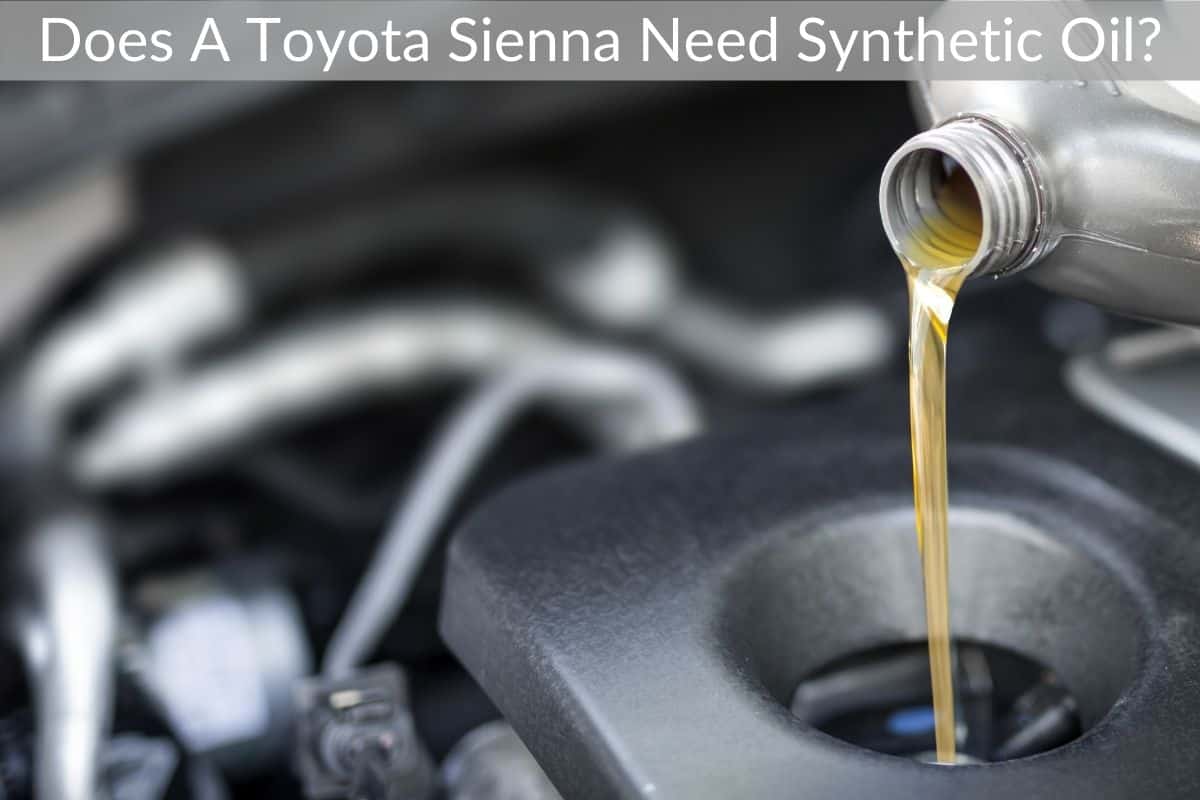 Conventional oil has worked for generations so why is synthetic oil taking over now? Toyota has recommended for years now that synthetic oil be used in their motors for top-quality performance and durability.

Since Toyota is one of the leading car manufacturers with cars staying on the roads longer, it might be worth checking out their recommended synthetic oil.

If you purchased a Sienna (or are considering getting one) you will want to know whether you have to use synthetic oil or not in the vehicle.

Toyota Sienna vehicles should use 0W-20 oil which is synthetic. Toyota says you can exchange it for 5W-20 for a single oil change but then you need to go back to the 0W-20 on the next oil change.

It is recommended for Toyota Siennas that use synthetic oil to have their oil and filter changed every 10,000 miles or 12 months, whichever comes first whereas conventional oil needs changed every 3,000-5,000 miles.

Traditionally, conventional oil has been used for a long time and many don’t realise the difference synthetic makes to your engine. Cars and other motorized vehicles have typical lifespans and we all agree that when a car’s time is up it’s up.

But what if using synthetic oil can make your engine last longer? Read on to find out more about synthetic oil, its benefits, and which Toyota Sienna models require it.

What Is Synthetic Oil?

Synthetic oil is a man-made oil artificially created with chemical compounds. It is a lubricant just like conventional oil but contains petroleum components and other chemical additives for high performance in motorized vehicles.

Synthetic oil does typically contain a base component of distilled crude oil, which is the natural petroleum we find when drilling beneath the earth’s surface.

The first known production of synthetic oil was in 1877 and a very detailed history of how synthetic oil came about before, during, and after German wartime can be read here at amsoil.com for those interested in the history behind synthetic oil.

Although no Toyota Sienna models require the use of synthetic oil every oil change Toyota does recommend all modern models should be using synthetic oil at least every other oil change.

For guidance, and to be sure which oil your Sienna needs we highly recommend checking your vehicle manual for details. If you have, unfortunately, misplaced your manual, you can also check the vehicle identification number (VIN) and provide it to a local dealership so they can check the database and get the information you need.

You can usually find the VIN on the edge of your driver side door when opened.

Toyota has recommended that synthetic oil be used in all their newer vehicle trims and that all oil and filter changes be done around the 7,000 – 10,000-mile mark on the odometer, or at 12 months, whichever comes first.

For all Sienna models after 2010, Toyota recommends synthetic oil be used in at least every other oil change. If the synthetic is not available Toyota recommends the next best thing is SAE 5W-20 but to have your oil replaced with the better-quality SAE 0W-20 next time you have an oil and filter change.

All 2011 Toyota Sienna models require the use of synthetic oil.

2012 Toyota Sienna trims are recommended to have synthetic oil, but some models can take conventional motor oil. Check with your dealership or in your manual.

Toyota Sienna models from 2013 – 2015 should use fully synthetic oil SAE 0W-20 but can use a lower quality oil every other oil change if this is not available.

Toyota advises that all models from 2016 – 2019 should be using fully synthetic oil SAE 0W-20 but can use SAE 5W-20 if the top-quality synthetic motor oil is not available. It is not recommended to use this lower quality oil two changes in a row.

From 2020 to 2022, Toyota recommends that Sienna’s use top-quality SAE 0W-20 synthetic motor oil but you will find some models that use conventional oil. Check with your dealership or in your vehicle manual to confirm.

What Are The Benefits Od Synthetic Oil?

The word synthetic may make people think that it is not as good as something conventional. But synthetic oil is designed to perform better in vehicle engines and is even used in high-performing jet engines.

Here are the multiple benefits of using synthetic oil:

Generally, synthetic oil is seen as a superior oil that is better for your vehicles’ motor and performance, it is, however, much more expensive than conventional oil. But that’s pretty much where the downsides of synthetic oil end.

Conventional oil does provide enough lubrication in your engine and has been used for generations, but synthetic oil is outperforming conventional oil and slowly becoming the new “normal” for manufacturers across the world.

Consumerreports.org reports that in 2019, over 70% of vehicles on American roads are using either fully synthetic or blended synthetic oils in their engines.

Toyota Siennas have been known for their durability, their longevity, and being an overall reliable car. There are many reasons why the Toyota Sienna has remained popular for so many years and how this vehicle remains on the road for so long.

Two of the main reasons are that it is a hybrid model and that most Toyota Sienna’s use fully synthetic oil to keep the engines healthy and running for as long as possible.

Although synthetic oil comes at a higher price you may find the longevity in your vehicle is worth the extra cost of the recommended synthetic oil.