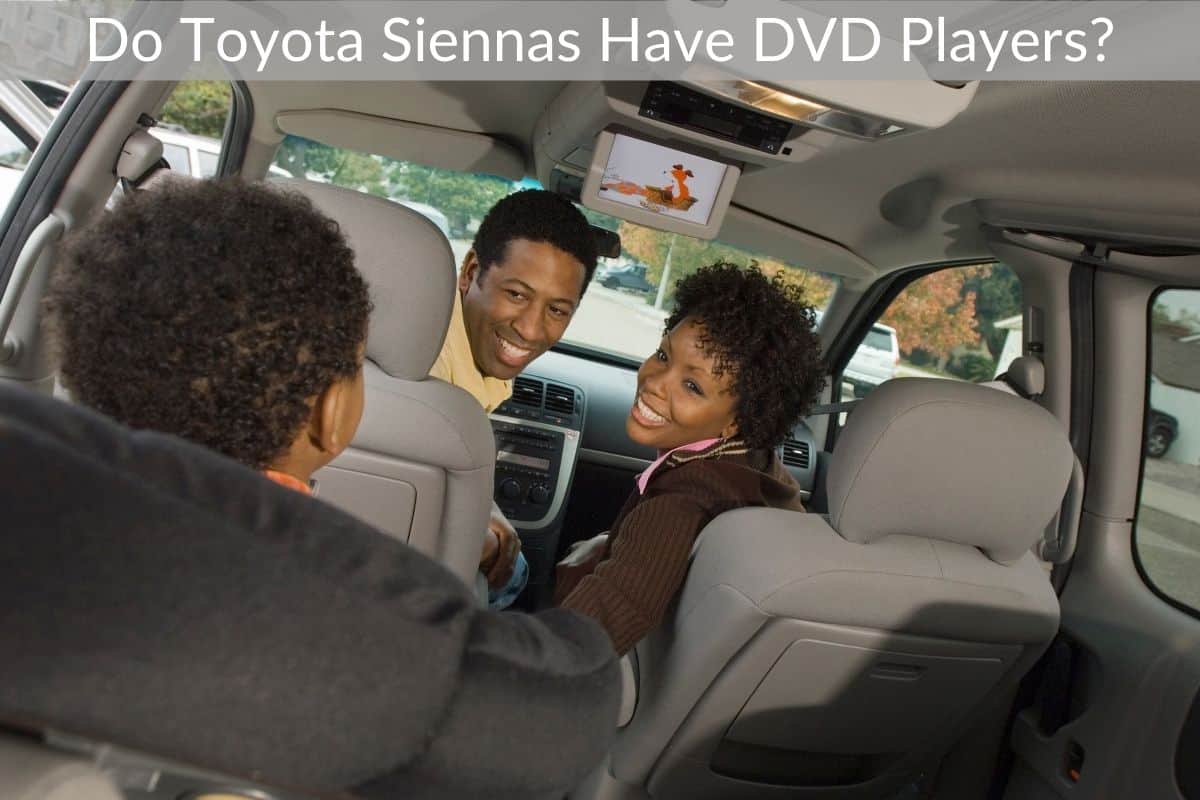 Keeping kids entertained while on long – and let’s face it – short trips, is a sure way to have a smoother driving experience. Parents around the world have been extremely grateful for the additional entertainment system in vehicles to keep children happy and complaint free.

If you are looking to buy (or rent) a Sienna you might be wondering if it comes with DVD players already installed.

Let’s find out more below about the features of a Toyota Sienna and more importantly, why the DVD system is not a standard thing. To see the most popular DVD players for your vehicle just click here.

Which Toyota Siennas Have A DVD Player?

Limited and Premium upgraded editions of the Toyota Sienna from 2018 – 2020 came equipped with DVD players. Standard trim Sienna’s, however, do not come with pre-installed DVD players.

The latest releases of the 2021 and 2022 Sienna have not incorporated the DVD player in any of its available models as DVDs have begun to phase out. Instead they allow you to cast from your device to the screens rather than using the physical discs.

If you’re in the market for a Sienna and one of the things you like about them the most is the simple design, but you want a DVD player to keep your kids amused on driving trips, you have three options:

Here is what the entertainment package includes in the 2018 – 2020 Toyota Sienna:

We won’t deny that it’s a pretty good and reasonable package.

With that being said, has the Sienna range continued this entertainment package with the latest release of their 2022 Sienna range?

Although it has become almost regular practice for vehicles to come equipped with the latest and greatest that technology and manufacturing have to offer, the latest standard Toyota Sienna does not boast a DVD player, and neither does the superior limited and platinum versions of the Sienna models.

There are five Toyota Sienna options available in the 2022 range and we’ll take a closer look into each one below.

The starting price for a 2022 Toyota Sienna is approximately US$34,560 for a standard trim LE model that does not include a DVD player.

For an additional US$2,375 you can choose to add on the LE Plus Package with options that include:

So, for $38,110 you can add additional media packages, but there’s still no DVD player.

Although the highlighted features of the Sienna XLE are superb and this minivan boasts numerous benefits to the driver, the starting price of $39,850 still does not include a DVD player.

It comes with an additional 8th seat for no extra cost for the larger family, but the space where a DVD player could fit perfectly remains empty.

One of the main differences noted is that the XSE can only host 7 seats. The other differences are mainly in the packages offered, which again, there is no option for a DVD player in sight.

It’s not until we get to the 2022 Sienna Limited Model, starting at $46,800, that we see a package for an entertainment system that might interest the kids!

Here are the features:

This package has an additional cost of $1,915 and unfortunately still does not offer a way for DVDs to be played.

Here you have a vehicle that will cost you $49,890 and your kids still have to leave their favorite DVDs at home and parents have to learn how to utilize HDMI cables and SD cards among other technological platforms to get maximum usage out of this package.

Suddenly the features of this minivan have become much more 20th century compared to the earlier model which was simpler in design and quite favorable compared with other vehicles that host too many unnecessary “features”.

Here is the 2022 Toyota Sienna Platinum model in all its glory and the features it offers:

And plenty more that separates this platinum vehicle from the other models.

What we didn’t expect, was the exact same entertainment package as the Limited edition of the Toyota Sienna for an additional cost of $1,915

Meaning, no DVD player and a total cost of $53,515 for standard options and the entertainment package.

Why The Newest Toyota Siennas Don’t Have A DVD Player

Although Sienna models in 2018 and previously came with entertainment packages that could play a traditional DVD and Blu-ray for watching movies and shows in the car, Toyota has decided they no longer want to provide DVD players as an option in the latest Sienna models.

Why is this the case? Because DVDs and therefore DVD players are slowly becoming obsolete in the modern era that offers streaming services like Netflix, DisneyPlus, Amazon Prime, and many more.

As stated by 2019 Sienna Limited Premium (FWD) owner in the forum siennachat.com, this is just the evolution of electronics.

Although you may have a decent DVD collection at home and some of us love collecting the physical discs that we know are better quality than a lot of streaming services, it is a fact that DVD sales have drastically fallen by over 67% since 2011.

According to Business Insider, DVD movies now make up less than 10% of the movie market.

Have no fear, physical DVDs and discs aren’t dead yet, people are still on the lookout for a few DVDs here and there especially if it completes a collection. But DVDs take up a lot of room and when discs get scratched, they’re ruined and have to be thrown away or resurfaced .

Streaming, on the other hand, doesn’t take up any room, there’s no physical disc to damage, and streaming boomed throughout the last few years so getting back into DVDs will either take some time or they will just keep declining.

When’s the last time you went to your local DVD store to rent or purchase a DVD?

The Toyota Sienna has additional packages that offer 11.6-inch screens and HDMI ports and wireless screencasting for playing movies through the rear entertainment system. Toyota also offers numerous charging ports and USB ports for those who wish to purchase portable DVD players if you’re keen to keep the world of DVDs alive.

Alternatively, there are plenty of tutorials on YouTube as well as professionals at Toyota who will show users how to access and use their entertainment system easily.