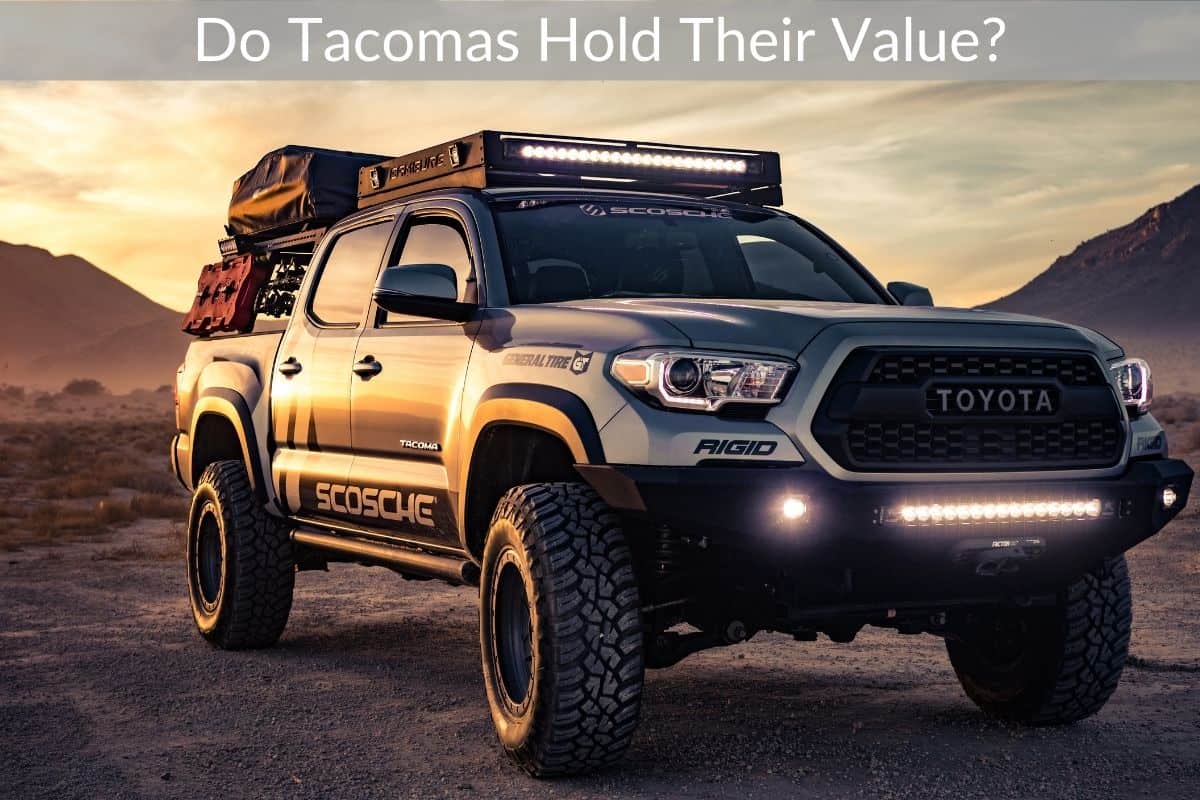 When people are considering the different choices for a midsize pickup truck, the question is often asked if the Tacoma holds its value and whether it really is worth spending the money on an older Toyota. The Toyota Tacoma has been manufactured since 1995 and was awarded the prize for the best compact pickup truck in 2020 for the sixth year in a row.

According to research and scoring practices in vehicle reliability, the older Tacomas rank even higher than the new ones. If I were searching for a new vehicle, and its reliability rating was considerably lower than its predecessor, I know my choice would be to purchase an older, used model.

Read on to find out how and why the Toyota Tacoma holds its value so well in today’s car market. To see the most popular car gadgets just click here.

Why And How Does The Tacoma Hold Its Value?

Most Tacoma models, including the newest 2022 Tacoma model, rate highly in safety, reliability, and performance. But the older, favorable, Tacoma models have multiple other reasons for holding their value.

Research shows that the resale value for most Tacoma’s will only depreciate approximately 28% or less, even after 5 years of use, and are ranked as one of the best vehicles for holding its value on our roads today.

Whereas most vehicles lose up to 60% of their value within a five-year time frame Tacomas are much better.

Here are a few reasons why you might find the Tacoma is the pickup truck you’ve always needed:

9-12 inches of ground clearance means the Tacoma is more suitable for off-road adventures than other newer vehicles on today’s market that might only provide up to 10 inches or less.

Speaking of off-road capabilities, I have checked numerous websites and research articles on which vehicles are best for their off-road abilities for those weekend camping trips in the outback or wilderness.

The Toyota Tacoma makes it on to every list.

If ever there was a vehicle that rarely had any maintenance and mechanical issues, it’s the Toyota Tacoma.

Although there have been issues with some Tacoma models since their manufactured release dates, the majority of Toyota Tacoma’s have been listed with 5-star reviews in safety and have also been reported as having fewer maintenance issues than other reviewed vehicles.

Depending on the model in question, Tacoma’s have a typical towing capacity of around 3500 (1587kg) to 6400 (2902kg) pounds. This means Tacoma’s can tow small to medium-sized trailers, campers, and caravans.

Business Insider rates the Toyota Tacoma at number 3 for durability in regards to miles. The Tacoma is one of the most likely pickup trucks to last over 200,000 miles in its lifetime if it’s well taken care of.

Although Toyota improves on its models every year, the Tacoma model has stayed true to most of its original features that are popular with pickup truck lovers throughout the US.

When things are more popular, they can either get more expensive or much cheaper. In the case of this value-holding camping, hard-working, and 4-wheel-drive machine, the price has kept its value rather than depreciating, because it’s still so popular.

Modern-day pickups are changing to become more like regular SUV’s and apparently it’s not what pick-up loving truck people want. The simplicity of the Tacoma is popular and as such, this vehicle holds its value well.

Which Tacoma Model Holds The Most Value?

For the last 16 years, the Toyota Tacoma has been the best-selling, mid-size pick-up truck in America but it’s the third generation 2018 Toyota Tacoma model which holds the title for holding its value the best.

You can find further information on the awards and vehicle resale value through the Kelley Blue Book website.

Why Are Used Tacomas So Expensive?

Used Toyota Tacoma’s have been known to sell at higher prices and can even be more expensive than the newer models (in rare cases), and it’s because the newer models just don’t rate as good as the old.

You’ve heard of the saying in with the new and out with the old? Well in the case of the Tacoma, it’s quite the opposite.

The fact that a used car, with miles under its hood, wear and tear from weather and use, and possibly a couple of food stains on the seat, might be more expensive or similar in price to a newer, cleaner model, might not seem right.

Here is a list of some of Toyota’s Tacoma models from 2005 – 2021 and their average retail and used price ranges:

As you can see, you can purchase used models for slightly cheaper prices than retail priced vehicles but not by much. You can trade-in your 2015 Toyota Tacoma for almost the same amount it costs to purchase a 2021 model.

So why are Tacomas so expensive?

Although used, Tacoma’s are still customizable and have numerous add-on opportunities for car lovers, traders, and outdoor enthusiasts alike.

But one of the main reasons the used Tacoma’s, pre-2016, are so expensive is because they simply rate higher in reliability than the newer designed Tacoma models.

When the 2016 Tacoma was designed and manufactured, it only scored a 1 out of 5 in reliability compared to 2015 which scored a perfect 5 out of 5 for its reliability rating. Which one would you rather buy?

Toyota is a well-known, trusted, and world-renowned brand of motor vehicles that have been manufactured since 1937. They haven’t disappointed with their mid-size pick-up truck range of durable and reliable Tacoma’s and the Tacoma is a leading pick-up truck among its mid-sized competitors.

Selling or trading in your old Tacoma could earn you some serious investment cash but we highly recommend using it to purchase another Tacoma which will be a worthwhile investment in itself due to how well these beasts hold their value.