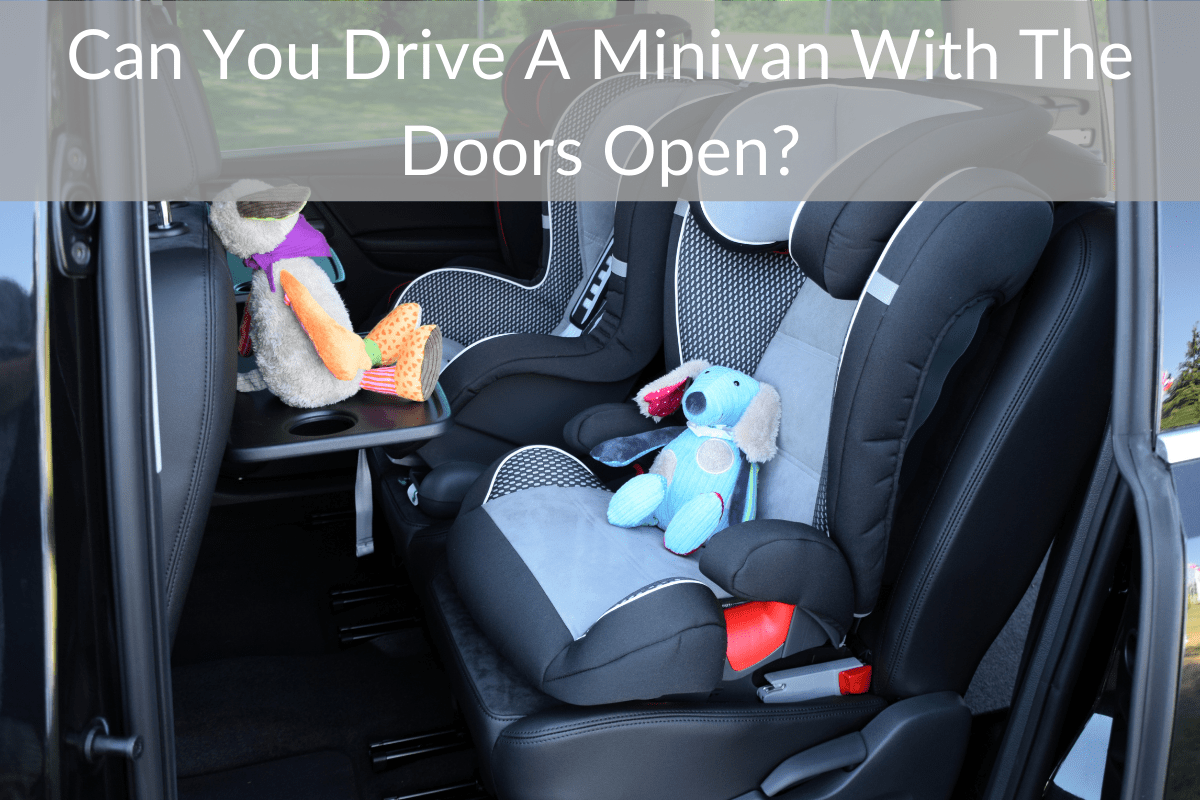 If you have never owned a minivan and you are simply curious about whether you can drive with the doors open or if you are wanting to try it but don’t know if it’s possible then this article is for you.

You actually CAN drive with the minivan doors open on most models however it is illegal in most states because of how dangerous it is. Some newer models with power sliding doors won’t allow you to open them unless the vehicle is in park for safety reasons.

Just because you “can” drive with the doors open doesn’t mean you should. In fact, it is illegal to drive not just a minivan but even any other vehicle with its doors open. The reason is that it is risky not just for you but even for other vehicles that are on the road.

Even if everyone in the vehicle is buckled in it is still dangerous to do because other things can fall out causing damage to another vehicle or people around you. Also, in the event of a crash you are much less safe than when the doors are shut as well.

Doors add a lot of strength to the vehicle

If you find that there are no restrictions on driving with open doors that are applicable in your state, you can drive your minivan with the doors open. However, the thing to remember here is that in most automobiles, the doors add more strength to the entire body, particularly to the side intrusion beams at bumper height.

So, when you drive with your doors open, you are risking seriously injuring everyone inside in the event of a crash since you are reducing the strength of the vehicle itself.

How about Sliding Doors?

You probably know that most minivans have sliding doors. Now, your question will be can I keep the sliding doors open in my minivan when driving.

Just as with regular doors sliding doors are typically required by law to be closed. If you are hauling something that is too big to fit in the vehicle so you have to leave a slider open and everything is tied down you will likely be fine as long as you go slow or have your flashers on. However, if you are wanting to go down the highway with your minivan’s sliding doors open, if you get caught it will likely result in a ticket at minimum.

Whether a sliding door or a be that opens and closes normally, most states and countries have laws prohibiting the doors of a vehicle to be open while the vehicle is in motion.

Remember that when something falls due to the doors kept open in your vehicle on a road, it can disturb the vehicle following your vehicle and could also hit someone who is near the road as well. It can also create fear in the minds of the people who are  following or near your vehicle which could also cause them to make poor driving decisions.

So, it is better to avoid such driving on ethical grounds even if no legal formalities are restricting this type of driving in your state.

When it comes to driving a vehicle irrespective of whether it is a minivan, a car or even a bike, safety should be your priority. Not just your safety, you should also be considerate about the safety of the other drivers on the road and your family and friends that are accompanying you in your minivan.

Understand the risks associated with driving with doors open

If you are particular about driving your minivan with doors open, you should think it over again. Of course, we can hear you saying that if it is not restricted in your state you are free to do it. While that may be true, it can also be morally unethical for the following reasons:

Laws about driving with open doors

Virtually every state in the USA has some laws on their books about not being able to do this but some laws are more strict or are more heavily enforced than others. Some specific examples of laws in the US and in Canada are:

While it is illegal to drive with open doors in most states of the United States, it is very strict in Oregon. The state has cracked down on drivers, who leave their car door open or open the door on the side of traffic, bicyclists and pedestrians, particularly when it is not safe to do it.

You cannot keep the doors open for a period longer than required for loading or unloading passengers.

The state also considers improper closing or opening of the door or leaving the door open as a class D traffic Infraction. Also, under this law, the state will fine you $90 when you do these things. This rule applies not just to minivans but also other types of vehicles in Oregon.

Not just in Oregon, the state of South Carolina also considers it illegal to leave the car doors open under the 2012 South Carolina Code of Laws. This rule comes under Title 56 of Motor Vehicles Chapter 5 of Uniform Act Regulating On Highways.

So, you should be sure not to drive with your minivan doors open in these states to prevent legal action against you.

In Ontario, it is illegal to drive a minivan with the doors open. The Ontario State Traffic Act suggests that no person shall open the door of a motor vehicle on a highway. He/she should not do this in the state without taking any due precautions. The driver should ensure that this sort of open-door driving will not endanger the life of another person or vehicle. Also, it should not restrict the movement of other vehicles or individuals. The same rule as applicable in Oregon and South Carolina is applicable in Ontario as well.

So, if you are planning for such a drive, you should gather complete details about the traffic rules applicable in your state. Only then, you can ensure that no legal action can be taken against you.

Just because there might be no restrictions in your state for driving a minivan with doors open, it does not mean that it is a good practice. It can cause ill-effects not just for you but also for others traveling with you in the minivan or other people on the road as well.

It can seriously affect the other vehicles traveling on the same road as you. It is not that we should not do things that the law restricts us from doing. To lead a moral life and a life that does not trouble others, we should follow some moral practices. This will bring us a sense of satisfaction as well.

You might think this is a bit too philosophical. But it is the reality!