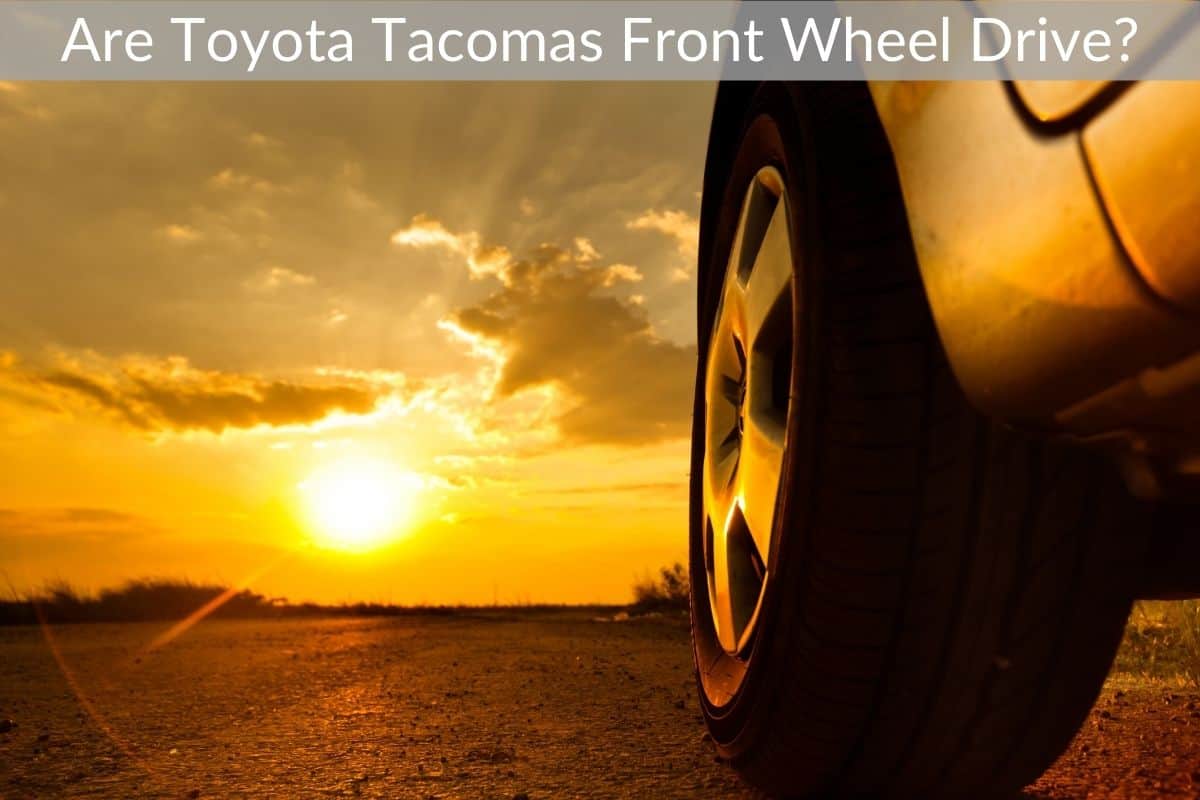 Vehicles, like the Toyota Tacoma, have been made to suit favorable conditions for many years now, and choosing between a front-wheel-drive (FWD) and a rear-wheel drive (RWD) gives the driver the option of having a more suited vehicle to their needs.

But which is better for you and how do you choose? Do Tacomas even offer FWD?

Released in 1995, the first generation of the Toyota Tacoma was designed to replace the Toyota Hilux to improve the overall quality of a more personal-use compact truck. It better fed the needs of the US and Canadian compact truck market and was a huge success in its first few years.

Read on to find out more information about the wheel driving features of the Tacoma and why it is still a very successful vehicle in today’s market. To see the most popular car gadgets just click here.

Are Any Tacomas Front Wheel Drive?

Toyota Tacoma’s are not front-wheel-drive. They come in two-wheel-drive models for rear-wheel and overall balancing of the whole vehicle and four-wheel-drive (4WD) models for the ultimate off-road experience.

To understand more about why Tacoma’s aren’t manufactured with FWD options, you need to understand the differences in the advantages and disadvantages of the FWD models when compared with RWD.

You should also know why other cars benefit from FWD and Tacoma’s do not.

What Is Front Wheel Drive?

Front-wheel-drive is where the engine of a vehicle powers and drives the front two wheels only.

Although FWD vehicles offer some great advantages, they aren’t typically used in trucks, compact, mid-size, or larger trucks and we’ll explain why in further detail below.

But first, one of the main advantages of a FWD is its valuable fuel-saving economy.

The way in which a FWD car offers better fuel economy through gas mileage is because the engine is mounted at the front of the vehicle, which gives more weight to the drivetrain and less to the rest of the car.

The engine system sends power to the front two wheels which then pull the car forward on their own.

Among other benefits, like better traction from the heaviness of the engine being placed at the front of the vehicle, and more cabin space for the driver, passengers, and their cargo, FWD vehicles are usually cheaper in production costs.

Like all technology and mechanical engineering, however, the FWD design is not perfect and has some disadvantages. These disadvantages might not seem like a big deal to some, but in larger vehicles designed for hauling more weight, FWD would not be a viable option.

What Is Rear Wheel Drive?

Rear-Wheel-Drive (RWD) is the opposite of front-wheel-drive where the engine system in the vehicle only powers and drives the rear tires.

The job of each set of tires on a RWD vehicle is to ensure both sets have an equal amount of pressure for better performance of both the front and rear tires. The front tires steer adequately, while the back tires provide the power to move forward.

RWD was introduced before FWD and was the most common make of vehicle until gas prices soared in the late 1900s. Most car manufacturers removed RWD from their line-up process because they weren’t sought-after vehicles any longer.

Here are the benefits of rear-wheel-drive:

The disadvantages of a RWD are very few, but because of the weight distribution and the extra weight towards the rear of the vehicle, fuel becomes an issue and you do typically get fewer gallons per mile.

Another disadvantage is the limited traction of the tires on the road and along with that is the possibility of over-steering. RWD vehicles also don’t perform as well in bad weather conditions like snow, ice, etc.

It’s not just Toyota Tacoma, but most trucks that aren’t FWD and are still designed as RWD or more commonly in off-road adventuring vehicles, 4WD.

Although most manufacturers have removed RWD vehicles from their line-up and have replaced them with FWD and AWD, RWD is still the most common drive-type used in trucks and SUV-based vehicles today.

Here’s a list of vehicles that are still manufactured today with RWD, the Tacoma being one of the most popular.

So when the world started phasing out RWD, why weren’t trucks included?

Most trucks and larger vehicles like busses, SUVs, and mid-sized pickup trucks carry most of their weight in the back of the vehicle on the rear axles. Because of the weight in the back of larger vehicles, the front tires generally have less traction while the rear tires have more, effectively making the front tires useless when it comes to grip on the road.

Here are a few other reasons as to why larger vehicles, like the Toyota Tacoma, among many other models, are still manufactured with RWD:

Larger vehicles need to have the ability to have fuller steering capabilities for turning corners and maintaining control of the front of the vehicle. Having more weight in the back of the Tacoma, either while towing or not towing at all, keeps the vehicle in control and avoids over-turning situations that smaller vehicles might not avoid as easily.

Tacoma’s Are RWD Or 4WD

Here’s what you get when you buy a Toyota Tacoma:

The Tacoma has been popular since 1995 and although FWD is more common in smaller vehicles today, the Tacoma is still listed as a “truck” sized vehicle and is therefore eligible for RWD mechanical engineering.

Tacoma’s have always been manufactured as RWD and this has served the vehicle well in reliability, durability, and long-lasting value.

RWD is the standard option of a Toyota Tacoma, but you also have the option to select a 4WD if your leisurely activities involve off-road journeys.

The Tacoma has never been designed with a FWD option and has always been manufactured with comfort in mind for everyday use whether personal or work-related.