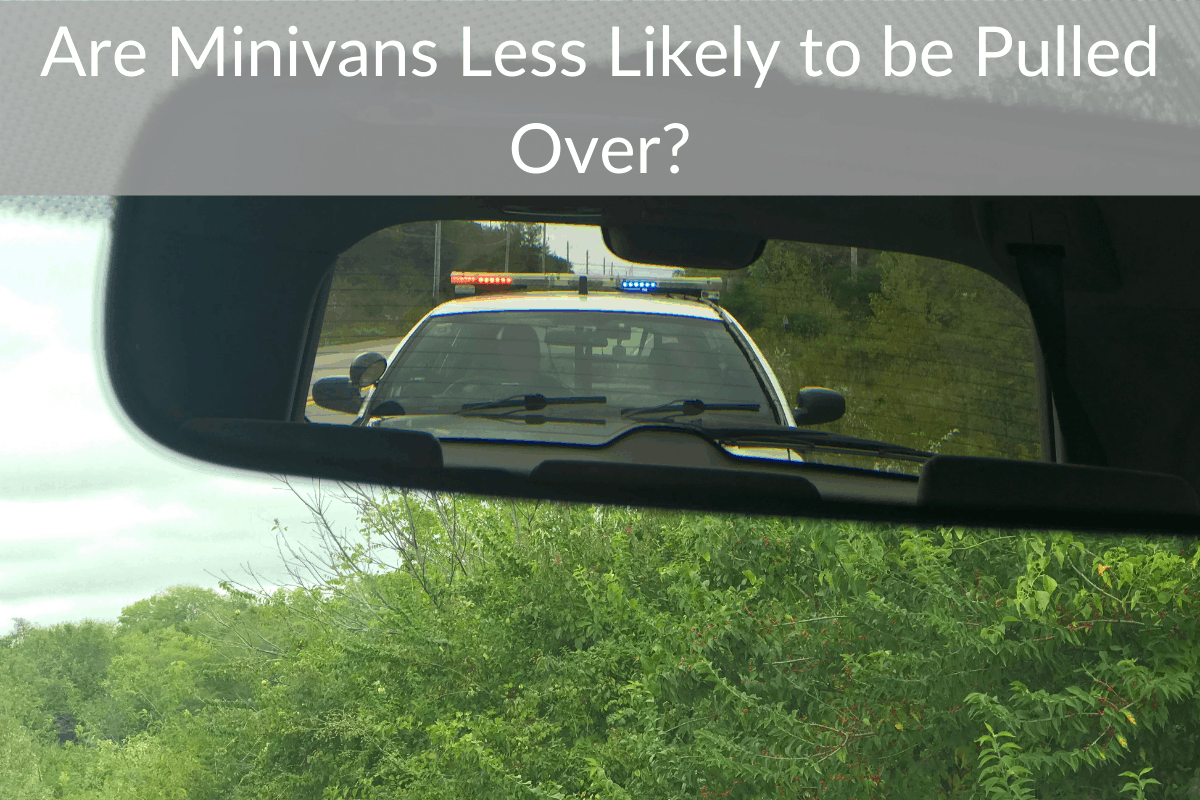 The drivers of a minivan or really any other vehicle don’t find the scenario of flashing lights and wailing sirens coming from behind them on the road very pleasant. However, getting pulled over by a police officer is an incident that has taken place to nearly every driver at some point in time.

If there was something that you could do to help you get pulled over less you would want to do it, right?

Well many people feel like minivans are not as likely to be pulled over as other types of vehicles but is this true? Are you less likely to get pulled over when you are in a minivan?

There shouldn’t be a difference in who is or isn’t pulled over based on the type of car but unfortunately there is a difference.

That isn’t to say that you won’t ever get pulled over when you are driving a minivan but if you and a sports car both break the same law in front of a police office they are going after the sports car 99% (or higher) of the time.

Police officers are human as well and although they are supposed to be completely impartial and uphold the law equally for everyone you are far more likely to get away with going 11mph over the speed limit in a minivan than you are in a Lamborghini! If nothing else the design and color of the sporty car will catch the officer’s attention while a minivan going past likely won’t.

Though no driver is a perfect one, there are many preventive measures that you can follow to lessen your chances of getting pulled over by the police officer who will then give you an expensive ticket.

Of course the easiest way to avoid getting pulled over is to simply not break the law but assuming that isn’t an option or you simply didn’t realize that you were breaking the law, you are much less likely to get caught or punished in a minivan than in any other vehicle.

What are the reasons for getting pulled over?

Some basic reasons why vehicles tend to get pulled over by the police are as follows:

The first is simply by an officer going in the same direction as you and you don’t see him. This can happen easily on large highways with multiple lanes or because the vehicle is unmarked and you don’t realize that it was a police car.

In this scenario the type of car you are driving likely won’t matter too much.

The second way that people get caught for speeding is when a police car is sitting somewhere using his radar to check speeds. This is when being in a minivan can really pay off.

The third way that people get caught speeding is by an officer going in the opposite direction. Again, being in a minivan could save you from a ticket as by the time they were able to turn around and get back to you there might be multiple minivans that it could have been that were speeding and so you might save yourself from a ticket that way by simply blending in with the other “mom mobiles”.

Oftentimes drivers get pulled over by police officers just because the film on the windows of their vehicle is too dark or maybe one of the headlights isn’t working right.Sometimes you may also get pulled over if there is a broken windshield in your vehicle.

Violations related to the equipment make distant spotting simple for the police officers and the people who violate can easily become the targets for a ticket. Such violations can even lead to extra tickets if you don’t renew your driving license, your registration isn’t updated, or your insurance is expired.

Again, this is where the blending in of a minivan can save you. Minivans have absolutely nothing about them that draws people’s attention so if you have tint too dark on a van you are unlikely to get into trouble for it while the same tint on a luxury vehicle might draw a ticket.

Police officials mostly categorize an incorrect lane change as cutting off another vehicle or changing lanes without signaling. Such violations can be very dangerous which further leads to a lot of road accidents since they are responsible for shortening down the reaction time of the driver.

The left lane should only be used for passing, but if you want to cruise alone you won’t want to do it there because this can be an eye-catcher for other police officers too. If you fail to use your turn signals it can help in triggering the traffic stop, but such concerns aren’t generally so severe that can lead to issuing a warrant or ticket.

The next driving practice that we are going to talk about is tailgating which can be very dangerous at all times. It never fails to capture the attention of the police officers and the drivers who practice this will not get spared in any way.

On days when the weather is good, visibility is clear and the roads are not wet, you can make use of the three-second rule as a basic rule of thumb. You just need to choose a fixed spot on the road to assure that a minimum of three seconds can pass amidst that time when the vehicle which is adjacent to you passes over. You can choose to allow an even bigger distance to pass, when the weather conditions are not suitable.

Doesn’t matter if you are texting, using GPS, texting, or on an urgent call, using a cell phone while you are driving is one of the most common reasons why pulling over drivers takes place in many states. Although the laws can differ from one state to another, irrespective of the state you are residing in, usage of cell phones while driving can be very hazardous.

It is the most prevailing cause that the police official cites for issuing tickets due to the aftereffects of driving without concentration which includes activities like improper lane changing and swerving.

What are the things you should do to avoid getting pulled over?

Mentioned below are some precautionary steps that you should follow when you are out in your minivan.

If you just purchased a vehicle you must check the temporary number plate of your vehicle and if you find out that it is smeared or faded you must get it changed from the dealer as soon as possible.

Check the registration and insurance

You must make sure that your vehicle has valid registration and  insurance to avoid getting pulled over by the police.

Using the turn signals on your vehicle is incredibly important when you are on the road. So, don’t forget to use them particularly while taking a turn or changing lanes.

Driving in your lane

You are supposed to be in the correct lane while driving. Random changing of lanes can be very dangerous for you as well as other passengers too and it is sure to draw an officer’s attention.

While you are driving on the road, you must also follow the stop signs properly. You should stop your vehicle at the designated spots and you should always make sure to completely stop each time as well.

Don’t forget to wear the seat belt whenever you are out driving your minivan, no matter how much distance you plan to cover. Wearing the seatbelt can keep you safe from accidents as well as getting pulled over.

It can definitely be said that the chances of a minivan getting pulled over are less in comparison to the more flashy other vehicles. However the items mentioned above are basic things that you must know, and following these rules can prevent you from getting pulled over no matter what you are driving.

These mistakes are very basic and if you make them, your minivan can get pulled over just as easily as an expensive sports car so make sure you avoid them as much as possible.