Contents show
1 SUV vs minivan: A comparative study
2 Are minivans equally as safe as SUVs?
3 What factors should you consider before buying either vehicle?
3.1 Performance and power
3.2 Cargo space
3.3 Fuel efficiency and other costs
3.4 Rollover Risk
3.5 Weight and Maneuverability
3.6 Crash Prevention Features
4 Conclusion
4.1 Related Posts:

Are you planning a long road trip with your family? Perhaps you are looking for an SUV or a minivan to add to your everyday drivers. Both vehicles have their pros and cons, which you will need to weigh individually and make a decision.

One important thing to consider when purchasing either a minivan or SUV is their safety. So, are minivans as safe as SUVs are?

According to some studies that have been performed minivans are actually safer vehicles for families than SUVs are. So not only are minivans as safe as SUVs but according to a study published in Injury Prevention children in minivans are 35% less likely to be injured in a crash than those in SUVs.

Many experts believe the main reason for this extra safety offered by minivans is the lower center of gravity that prevents them from flipping over as often as SUVs. The study above was done multiple years ago so the data might have changed a bit as more safety features have been added to SUVs.

However, the likelihood of an SUV rolling over is still much higher than it happening with a minivan.

Both minivans and SUVs are incredibly safe vehicles to use for your family but according to the study mentioned above minivans are actually the safer of the two types of vehicles.

To determine which of the two suits you better, you must have a thorough knowledge of both vehicle types as straight crash data doesn’t give a complete picture. If you will be driving off road a decent amount of time then an SUV beats a minivan hands down.

In the rest of this article I will go into more depth about minivans vs SUVs in regards to safety as well as the other features each type of vehicle offers.

Let’s start by going through a detailed description of both. 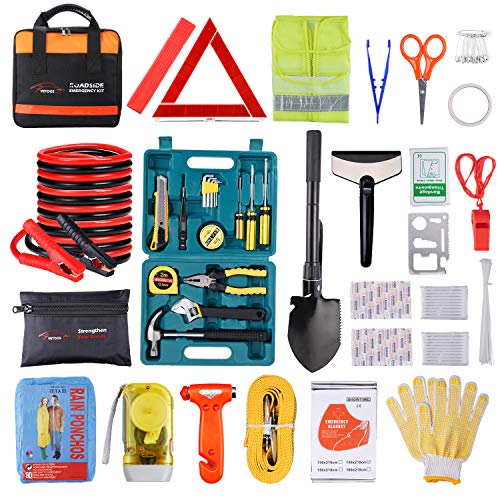 If you have a car then you need to have a safety kit in it.

This Emergency Preparedness Kit is a vital thing to carry with you in all of your vehicles as it will help not only in the case of a weather emergency but also in case of a breakdown.

SUV vs minivan: A comparative study

An SUV is a huge vehicle, featuring big wheels, considerable height, and classy styling. It usually has a rugged appearance which gives it more of a fun and adventurous touch. Being large, it has spacious interiors.

One can enjoy great visibility while driving these larger vehicles since they are further off the ground. In short, when you drive an SUV, you simply enjoy a thrilling experience.

Minivans, on the other hand, are more suitable for kids and transporting additional cargo. It characterizes sliding doors, three rows of seating arrangements and in most minivans, these seats are stowable or removable.

SUVs and minivans typically have similar features that they offer and both vehicles have their own pros and cons. If you have to transport cargo or awkward loads buying a minivan is surprisingly a better option. Since the seats fold down in the third row (and the second row in some models) you can fit a lot more cargo or items into a minivan than you can an SUV.

On the other hand, if you are looking to buy a stylish vehicle for your family, opting for a SUV isn’t that bad an option. In present times of advanced technology, both SUVs and minivans are equally advanced and they are both quite safe.

Are minivans equally as safe as SUVs?

It’s a general belief that SUVs provide more safety than minivans, because of their height and structurally robust appearance. But on the flip side, its higher ground clearance also makes it more prone to accidents, especially rollovers. In this regard, minivans have a lower height and a lower center of gravity as well, which makes them more stable, virtually eliminating chances of rollovers happening in an accident.

When you don’t look at the risk of rollovers, both SUVs and minivans are equally safe for travelling. Both are well equipped with advanced features and both offer high tech safety, thus ending the comparison of their safety in a virtual tie.

However, when you consider the higher likelihood of rollovers with an SUV it makes the minivan a clear winner in regards to safety in the event of an accident.

What factors should you consider before buying either vehicle?

If you are considering maneuverability, SUV crossovers are even better than the minivan or a traditional SUV. Crossovers can be handled easily and are built on a car chassis.

If you have to drive through harsh climatic conditions or rugged roads, an SUV is a better option than a minivan.

Most SUVs are either AWD or 4WD while minivans aren’t available in 4WD as of now and only the higher end models offer AWD.

Hence, if you want to go off-road, SUVs are a better choice.

However, both these vehicles offer similar seating arrangements, with an abundance of cargo transporting capacity but when combining passengers and cargo the minivan wins out every time.

You should consider the following factors before you make a decision:

In terms of performance and power, SUVs are the clear winners. Though major companies are manufacturing minivans with powerful engines with better structures, they still cannot overpower SUVs in this category. Because of the large size, SUVs typically have larger engines, no matter what the design of the vehicle is.

With better engines and more power, SUVs are expected to deliver better services and experiences to travellers.

That isn’t to say that minivans are dogs like they used to be. Modern minivans have plenty of acceleration and speed but when compared to SUV they certainly lag behind in both of those categories.

Though SUVs are more powerful and larger, minivans are designed to carry more passengers and luggage while offering more space inside. This is because minivans have huge cargo-carrying space in the rear of the vehicle and some models have space under the floor of the second row for additional storage.

Additionally, cargo is easier to be loaded in minivans because of their lower height. The seats in a minivan can be removed or folded and in some models everything folds virtually flat which allows you to fit large amounts of luggage or even full sheets of plywood or drywall!

Fuel efficiency and other costs

Primarily, minivans have an edge in this category, but nowadays a lot of SUV crossovers and hybrid SUVs are available on the market, which can easily beat the fuel efficiency of virtually all minivans. When it comes to the maintenance costs of both, maintaining an SUV costs more obviously because of its higher insurance expenses and other costs in terms of repairing tires and 4WD repairs.

Comparatively, minivans have a lower maintenance cost, as a result, it is affordable to more people.

As I have already mentioned, due to the high height of SUVs, they have more chances of rollover accidents than minivans. In case of accidents, the vehicle can throw passengers around the interior or even out of the vehicle which can be extremely dangerous.

Serious accidents can even cause deaths to travellers.

However, the same height is also an advantage. It gives more visibility to drivers, and also makes any impact less likely to be straight into the passengers.

Minivans are more stable and safer in this context. They have lesser chances of rollovers and therefore are the clear winner in regards to rollover risks.

SUVs being larger are meant to be heavier. They offer better performance capabilities than minivans and for a long time SUVs have been considered better and more luxurious than minivans. However, in recent years both types of vehicles  have become equally capable and well equipped.

If under any, unforeseen circumstances, SUVs hit other vehicles, they have lesser chances of getting damaged.

As I said earlier, with modern technologies utilized, both vehicles have become equally advanced. Now, both SUVs and minivans offer more or less the same crash preventive features. However, depending on the vehicle’s design and model, the features provided varies considerably.

Sometimes people can find a minivan with better driver assistance while sometimes not.

I would like to again emphasize the fact that both these vehicles offer more or less similar inside space to carry passengers and cargo. Suitability of the two in your case depends on your preferences, needs, and requirements.

Minivans are more practical and also safer when it comes to accidents. Modern minivans offer equal comfort, value, and drivability as SUVs do.

No matter which of the two you buy, remember you are investing a huge sum of money into the vehicle so make sure to choose the best model having the advanced features that you want and need.

Learn more about us here.